What’s 20 pounds and 22 inches long with the uncanny ability to never be wrong? Why, Punxsutawney Phil, of course!

On this day, February 2, Phil shows the world that he is the “seer of seers” by emerging from his burrow and prognosticating about the weather. He’s been doing it for 132 years, and he bases his prediction on whether or not he sees his shadow­—if he sees it, we’re in for six more weeks of winter. If not, we get an early spring. 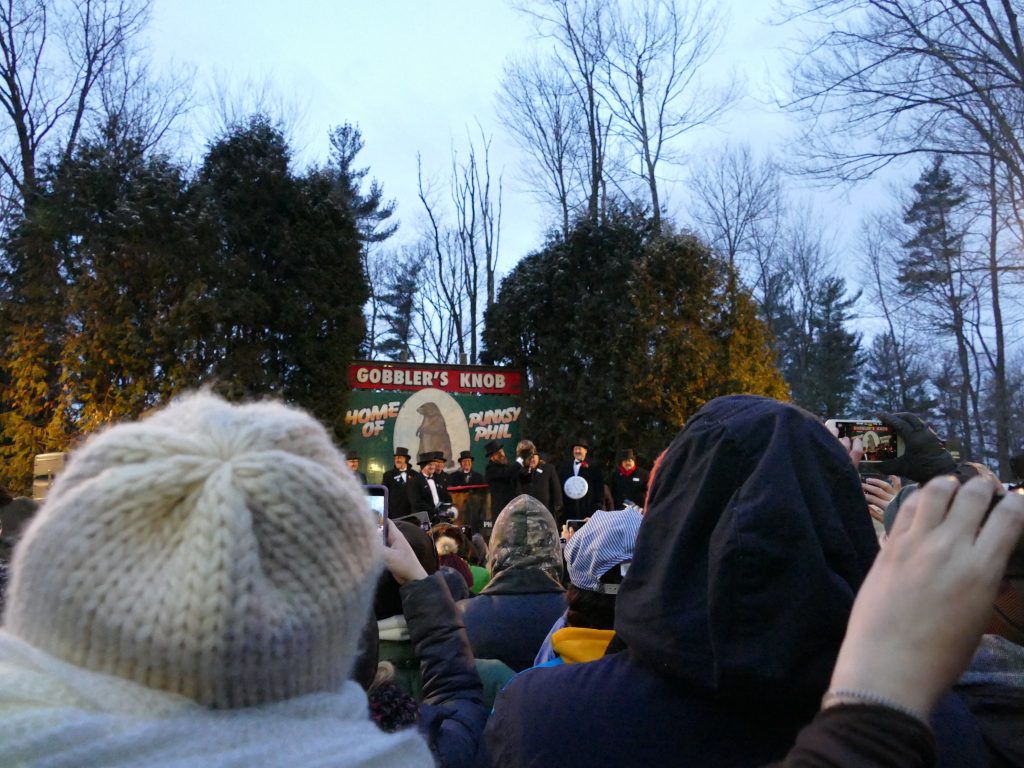 This year, more than 30,000 people gathered at Gobbler’s Knob in Punxsutawney to watch as he was coaxed out of his den, looked around and spotted his shadow. It was the 103rd time that Phil has predicted an extended winter, as he has only forecasted an early spring 18 times in his very long life. The crowd booed (though very few standing in the 11-degree weather can have truly been surprised), but their disappointment was short-lived—people seemed happy to simply be there in the presence of the surprisingly-calm guest of honor, Phil.

Partaking in this truly bizarre Western Pennsylvania tradition has always been a bit of a bucket list item for me. Of course, I’m a fan of the popular Groundhog Day movie starring Bill Murray—Who isn’t? But I also grew up only 40 minutes away from Punxsutawney in Indiana, PA, and it has always seemed ridiculous to me that I never made an effort to experience Groundhog Day firsthand.

Now that I have, I can honestly say it WAS ridiculous of me. Sure, the event itself is absolutely absurd. It actually feels almost surreal being there—like how I imagine it would feel to see a leprechaun at the end of a rainbow and to then have people take me seriously when I tell them about it. But it is absolutely worth the trip to Punxsy, in the wee hours of the morning, in the bitterly frigid temperatures, to be part of something special that can only be experienced in Western Pennsylvania.

For those of you who haven’t been there, here’s what I learned at Groundhog Day 2018:

1. Phil is larger than life.
We’ve all seen groundhogs before, and it’s probably not very often that we think twice about it. Yet watching that groundhog get pulled out of his burrow today felt somehow iconic. Perhaps it was the hush that fell over the massive crowd when he emerged.

Or it could be the fact that Phil is enormous. The average groundhog weighs 12 to 15 pounds, and Phil clocks in at 20. When he’s not prognosticating, Phil leads a pretty cushy life in his home in the Punxsutawney Memorial Library—he’s got regular access to food, nice views of the outside, and he even has a wife, Phyllis.
I suspect, however, that I was just sensing that Phil is extraordinary. With almost as many names as Daenerys Targaryen, “Punxsutawney Phil, Seer of Seers, Sage of Sages, Prognosticator of Prognosticators and Weather Prophet Extraordinary,” it’s an unusual feeling to be in the presence of a rodent with such a big reputation.

2. The Groundhog Club Inner Circle is a big deal.
They are basically the Illuminati, but a lot more fun. The Groundhog Club Inner Circle, aka the guys in tuxedoes, are a super-mysterious club that only Punxsutawneyians can join. Two of the members are responsible for handling Phil and taking care of his day-to-day needs, and the rest either serve in leadership roles or help plan the town’s Groundhog Day festivities. When they join, they are given an Inner Circle name. The current crew features names such as “Iceman,” “Sky Painter,” and “Coal Front.” Cool, huh?

3. Prognostication is a process.
Here’s how it works: The vice president of the Inner Circle, Jeff Lundy, prepares two scrolls before the event—one for if Phil sees his shadow, one for if he doesn’t. Then, at the break of dawn on February 2, Inner Circle president Bill Deely knocks on the Ceremonial Stump three times. He uses his magical acacia wood cane, which also bestows him with the power to speak “Groundhogese.” Phil then emerges, looks for his shadow, and communicates his forecast to the president. This is where errors can happen. According to the Stormfax Weather Almanac, Phil’s predictions are only correct 39% of the time, but that is chalked up to human error—the president sometimes has trouble accurately translating Groundhogese. Once the president receives Phil’s message, he relays it to the vice president, who reads the appropriate scroll in front of the crowd.

4. Groundhog Day weddings are a thing.
The Groundhog Day official schedule features “Groundhog Day Weddings” from 10 a.m. to noon today. In more detail, it says “Stop by and watch couples get married or renew their vows! All weddings were scheduled in advance. No Walk-ins available.” Looking for unique wedding ideas for 2019, anyone?

5. There’s a legitimate explanation for the origins of Groundhog Day.
Am I the only one who always assumed that Groundhog Day originated when a couple of inebriated Victorian-era guys roused an angry groundhog from hibernation? Not to say that inebriation had nothing to do with it, but it turns out that Groundhog Day was derived from Candlemas, which is a Christian holiday falling on February 2. On Candlemas, there was a German legend that a “second winter” would occur if the sun was shining and a hedgehog cast a shadow. In the absence of European hedgehogs, a group of German-descended groundhog hunters who called themselves the Punxsutawney Groundhog Club, decided in 1886 that a groundhog would make a decent substitute. The editor of the local newspaper was a member of the club, and he spread the story of Punxsutawney Phil, the weather-savvy groundhog.

6. It’s possible to wake up at 3 a.m. and still have a good time.
From a grand firework display set to John Williams music, to live musical performances including pyrotechnics and confetti, to entertainment from the members of the Inner Circle, to the quality of the people-watching, there is no end to the entertainment at Groundhog Day. At the coldest point in the morning, probably around 6 a.m., the band started to play rousing renditions of warm-weather songs such as Margaritaville and You are My Sunshine. While it didn’t fool anyone into imagining the sun was shining, it at least distracted us from the cold for a few minutes.

7. Punxsutawney is a town worth visiting.
Yes, the festivities at Gobbler’s Knob are over until next year, but on a festive day like this, it really allows the town to shine. Today I learned that Punxsutawney has a sort of Groundhog Day museum in its Groundhog Club Headquarters on West Mahoning Street. You can also visit Phil year-round at his home in the library, and you don’t even have to walk into the library to do it! Punxsy also has hiking trails, lots of great food and a wine trail featuring 17 wineries. It’s definitely day-trip material. 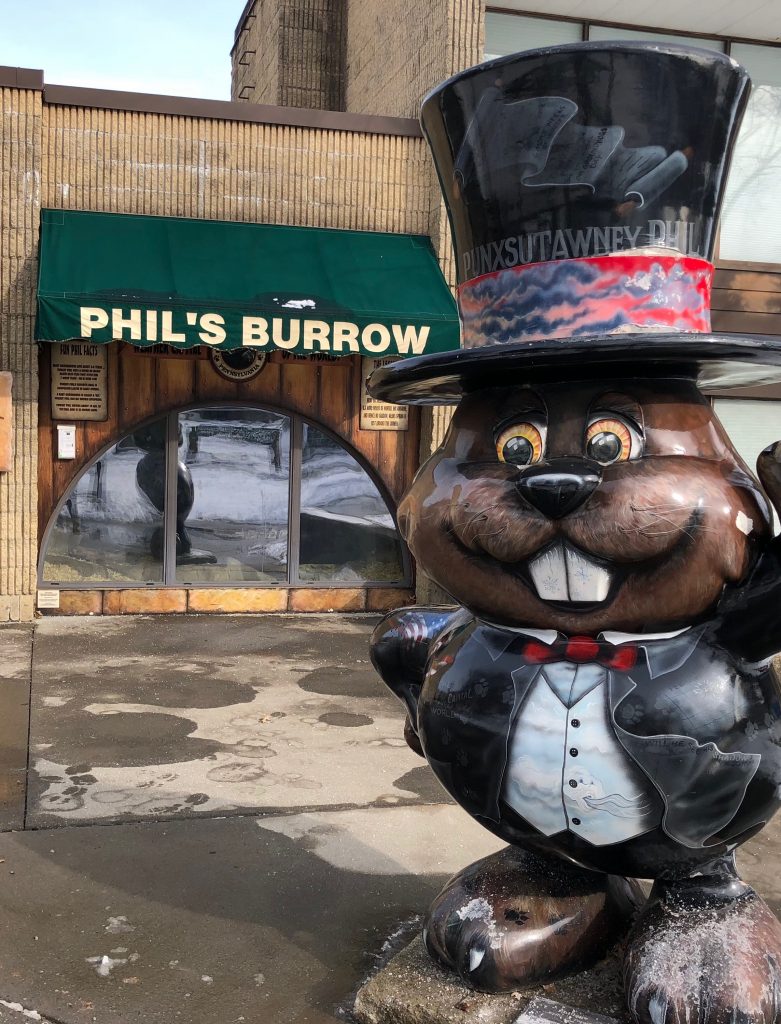 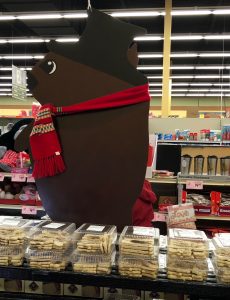 Growing up, my mom would always make the trek to Punxy sometime during the week of Groundhog Day to go to the local grocery store (it was a Country Market, but it is now a Shop n’ Save) and buy a whole bunch of delicious iced cookies in the shape of groundhogs. She would bring them in for my class when I was in elementary school, pack them for me to give to my friends in high school, and she shipped the cookies to me in college. Even as an adult, I still meet my mom around Groundhog Day to get my cookies. Here they are, pictured to the left, at their source. They are sugary and delicious and everyone should try them.

9. You might have Déjà Vu. You would get Mt. Lebanon vibes if you were to walk down West Mahoning Street in Punxsutawney this week. A familiar storefront, Commonwealth Press, temporarily set up shop to celebrate Groundhog Day by selling clever merchandise in partnership with the PA Tourism Bureau and Red House Communications. It’s open through the weekend, or until they run out of merchandise. Sounds like a good excuse for that day-trip to Punxsy. 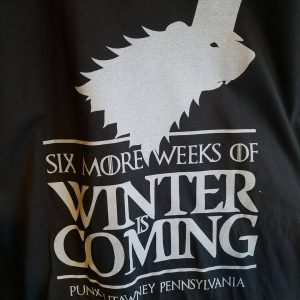 Want to learn more about Groundhog Day? Or hope to join the post-prognostication festivities? Visit the Groundhog Club website at www.groundhog.org.
Related Stories