f course, a house has no memory. It’s a pile of bricks and stone, slate roof or asphalt shingles, double-hung or casement (or maybe bay) windows. Mt. Lebanon residents are rightly proud of the quality and variety of their 14,000-plus houses. They’ve been home to hundreds of thousands over the years.

But homes hold memories, that’s for sure, and in a visceral way. When you’re doing the final walkthrough of the home you raised your kids in or visit the home where your parents raised you–the memories are palpable. At those moments, you believe in ghosts.

So, what of a building, a Mt. Lebanon landmark that is marking both its 100th birthday and its 50th anniversary as a church? It was birthed as the passion project of Joseph Roush, 1921’s version of a tech entrepreneur. President of Pittsburgh’s Standard Talking Machine Company, purveyor of victrolas and 78s, Roush commissioned his nephew Stanley Roush to create his dream home. (Fortuitously, Stanley was the architect for the City of Pittsburgh. His legacy includes the Clemente and Rachel Carson bridges.)  The New York firm owned by Frederick Law Olmsted’s sons planned the landscaping.

The 20-room “English cottage” was named Sunnyhill. It was home to the Roush family until 1931, when Roush hit hard times and had to sell. Four more families, and their pets and holiday celebrations, came and went.

Then in 1971, Sunnyhill was bought at a foreclosure sale by a different kind of family: the wandering tribe of South Hills Unitarian Universalists, who had split from the First Unitarian Church in Shadyside. They had spent the previous six years meeting at various locations from Pleasant Hills to Mt. Lebanon. Gloria Snyder, still an active member at 93, joined the tribe in 1965. The early years were “exhilarating,” she said. “It was fun starting a church.”

The first members were mainly young families, “mostly transplants (from) a time when corporations moved people around more than they do now,” Gloria wrote in a 40th anniversary remembrance. “We were family to each other.”

Vijay and Shelly Chandhok met at a students’ dinner at the Shadyside Unitarian church in the late 1950s. (As a student at Carnegie Tech, “I would go to all of the churches that had free dinners,” Vijay recalled.) They married, moved to the South Hills, and joined the local group in 1967. Vijay remembers the Sunnyhill purchase: “There was a question whether the township would let us have it. A women’s group wanted it, too.”

“Quite a few” church members took second mortgages on their homes to help pay for the building, he added.

The purchase caused some talk in their new, conservative neighborhood. As a Sunnyhill history document put it: “Mt. Lebanon–the municipality and the neighbors–were not pleased. The township wanted to keep the property on the tax roll. The neighbors thought the church was a hippie cult and that members would be having pot parties around the swimming pool.”

In a 1980s video, available on the church website, the late Bob Maher recalled speaking at a municipal meeting during that contentious time.

“I told them we felt very much at home in Mt. Lebanon, and they looked at me like I was crazy. I said, ‘You may not realize it, but three of the schools here are named for Unitarians.’” (They are George Washington, Thomas Jefferson and Julia Ward Howe, though there is some historical disagreement about the two presidents’ affiliations.)

The pool is long gone, and local attitudes have shifted over the years. “They were suspicious once,” Gloria conceded. “Now, if there’s an emergency at Markham, the kids are evacuated to the church.”

Historically, Unitarian churches are non-hierarchical, and according to the history, Sunnyhill was that and then some. When South Hills congregants decided to start meeting closer to home, First Unitarian’s minister recommended they become a branch of their church and listen to services piped into their meeting room. The “box on the wall” option, as it was known, didn’t fly. 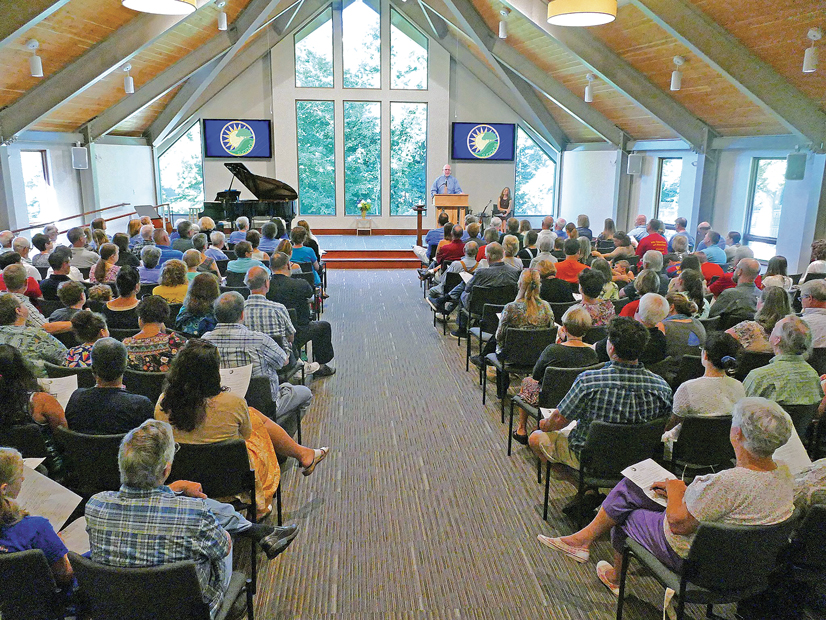 Instead, the locals decided to become a lay-led fellowship. They invited speakers to their services, including Fred Rogers and Eleanor Smeal, who went on to become president of the National Organization of Women. But as the congregation grew, improvisation led to disorganization.

“We had a bad moment when someone called and said her father had died, and no one called her back,” Gloria recalled.

So it evolved: Members who were social workers stepped up to become pastoral caregivers. Rev. Jesse Cavileer became an adviser and led services once a month. When a member asked him if he thought the congregation should hire a full-time minister, Cavileer, knowing his flock, said “You might need a minister, but do you want one?”

It wasn’t until 1991 that the Rev. Kirk Loadman-Copeland, a member who had recently completed seminary, became Sunnyhill’s first full-time minister.

By 2014, members had called Rev. Jim Magaw, formerly a professional musician and fundraiser, to lead the congregation.

“The best minister I’ve ever seen,” said John Armstrong, who joined Sunnyhill with his wife Judy and young family in 1981. Armstrong has served as board president, assisted in producing Sunnyhill Live concert events, stacked pumpkins for the annual pumpkin patch, edited videos, co-written a church history, and more. Currently, he’s head of the building committee.

Soon after Magaw’s installation, his former professional expertise (and the support of Armstrong and many other members) came in handy, as the congregation chose to mount a capital campaign to add a sanctuary and offices to the Roushes’ cottage.

“Sunnyhill has always been a warm and cozy place,” Magaw noted at the 2017 dedication of the new space. “But coziness is not particularly welcome…when you can’t walk down the hallway without literally bumping into other people.”

Members raised more than $2 million for the project. The sanctuary, with its vaulted ceiling and more windows than walls, looks out over what was once an Olmsted landscape. The main room, too cramped for services, is now the right size for after-service coffee and conversation. The new classroom space allows religious education director Jen McGlothin more room to work with younger congregation members.

The outward-focused design of the sanctuary is no accident.

“I think the congregation has become more outward facing,” said Magaw. They’ve always been activists, going back to the earliest Earth Days in the 1970s. But Magaw believes that intensified after the 2016 presidential election.

“It was a pivotal moment,” he said, noting that more than a hundred people came to a gathering held the night after the election. “People felt a need to come together.” Since then, congregants have chartered buses to go to the women’s march in 2017, and March for Our Lives in 2018.

But support for the LGBTQ community, as indicated by the bright rainbow flag flying out front, goes back much farther. “Unitarian Universalists have had same-sex wedding ceremonies since the 1980s.

“Our rainbow flag has really meant something to people,” he adds.

Among them, of course, is the pandemic. The congregation was able to gather outside for several Sunday services over the summer, but otherwise it has meant going all in on Zoom. Six days a week since March 2020, Magaw has offered a daily video meditation. Sunnyhill’s Bible study and other discussion groups continue to gather virtually. McGlothlin offers “RE @Home” for younger members. The 10 a.m. Sunday service will continue to be streamed for the foreseeable future. Membership currently stands at 320 adults, and over a hundred children.

Magaw is encouraged. “As a minister you always hope to see the child dedications (similar to baptism) and memorial services even out.

“It’s hard to be a pastor when you can’t see or be with the people,” he conceded. “But because this church was strong going into the pandemic, it will stay strong.” 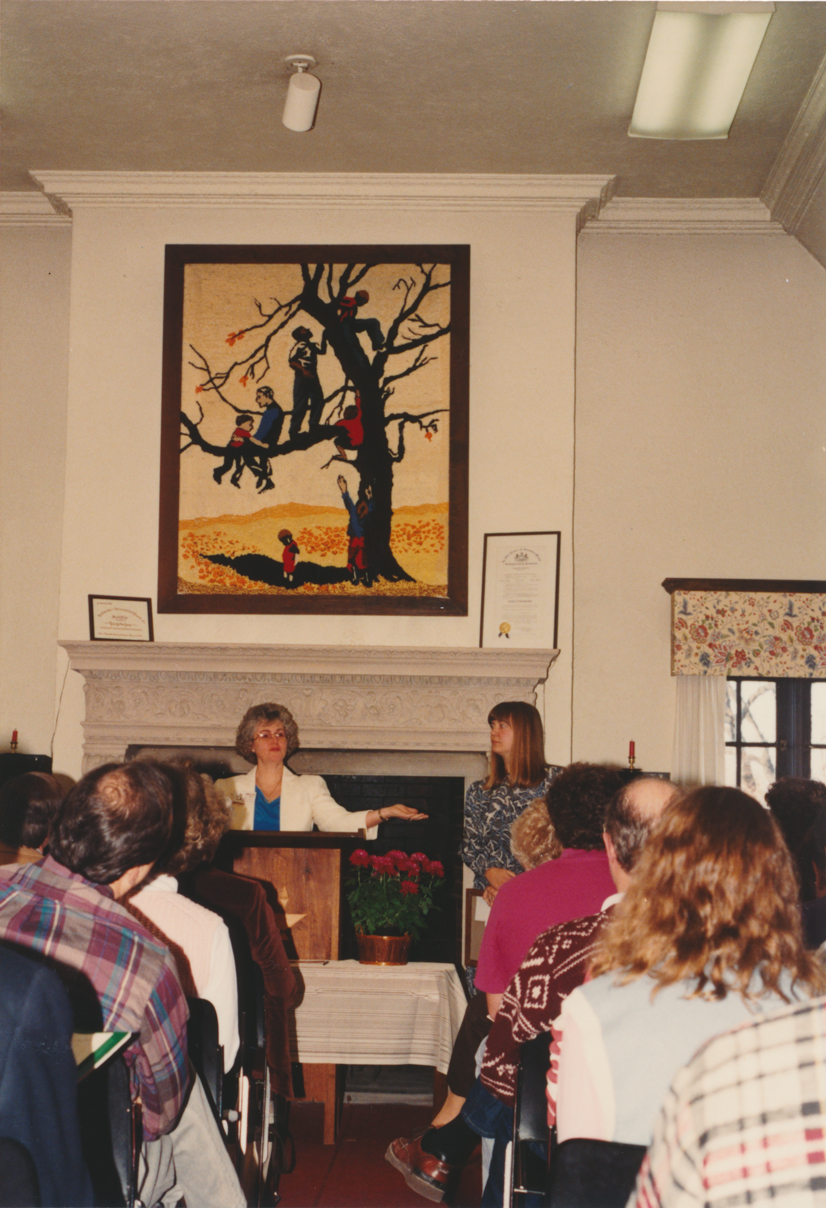 To get a sense of the soul of Sunnyhill Unitarian Universalist Church, the “people tree” tapestry is a good place to start.

It started out with a photograph taken at the first Earth Day celebration, in South Park in 1970. It shows several South Hills (not yet Sunnyhill) church members high up in a huge tree with expansive branches, ideal for climbing. Vijay Chandhok is up there, along with several other dads and kids.

A woodcut was made of the picture, which was treasured by members. From there, the idea of a latch hook tapestry was conceived. The creation of the tapestry is part of Sunnyhill lore.

A video made in the 1980s, available on the Sunnyhill website, features some of the church’s founding members reminiscing about the church’s beginnings. Snippets of the tree climb are included. There’s also footage of young and old, bent over the latch hooks and yarn.

“Anytime of the day or night, we were working on the tapestry,” one member recalled on the video.

“I don’t think anyone who wasn’t there could have any idea what it meant to us,” Shelly Chandhok added.

The finished product, five feet long and four feet wide, has hung above the Sunnyhill fireplace almost as long as it’s been a church. During an earlier expansion, when the fireplace and wall were moved back 18 feet, the tapestry moved with it. Though building committee chair John Armstrong said that more renovation is to come, “the fireplace and the tapestry will, without question, be a part of any new construction.”

From its place of honor, high above a 100-year-old fireplace, any stitching imperfections on the tapestry–unavoidable since enthusiasm counted more than skill during the creation–are invisible, not to mention unimportant. What’s seen is the tree, the kids and the dads, families coming together, a lot like the church they were creating.