Jamie Moore, of Vernon Drive, is one of those incredibly fortunate people who totally lives what he loves. And what he loves is food in all it’s incarnations, from seed to plate and everything in between. He’s amassed enough knowledge about his favorite topic, including becoming a Certified Organic Crop Inspector, to be a guru. That vast store of information is invaluable in his position as Director of Sourcing and Sustainability for the Hospitality Group, Inc., a division of Eat ‘n Park.

Sustainability has interlocking definitions. “On one level, it’s how we can build closed loop systems for our food supply,” says Moore. “For example, I work with farmers to grow canola seeds to press into oil to sell to Eat ‘n’ Park for French fries; the farmer then picks up the used oil and converts it to biodiesel fuel. A global example of sustainability is not depleting the oceans of fish because we need to maintain a continuous source of food.”
Sourcing is more targeted and immediate. “Somebody in the organization will make a food request, lamb chops for example,” says Moore. “It’s my job to find them. I know local growers that meet company standards. From there I have to find out which one can deliver the order in the specified timeframe.”

Another request can be to secure ice cream without milk or eggs. With all his contacts, though, Moore has had one failure.

“In 2007 we had a request for someone who was on a fruitarian diet,” details Moore. “He would only eat fruit and nuts that have fallen from a tree or harvested without killing or harming the plants.” 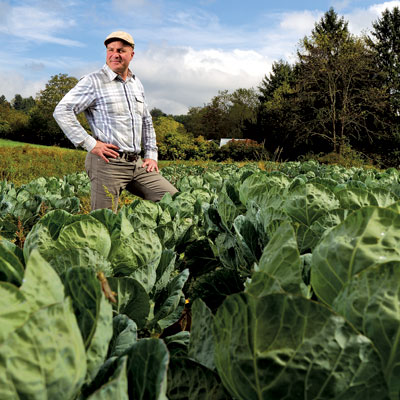 [1]Moore’s workday starts at 5:30 with an intense exercise program. And that’s about the end of anything that resembles a routine day. He could be at his office in Homestead consulting with management and chefs, or traveling to meet with clients, providers, students, or visiting farms where he might watch operations or assist with planting. Squeezed in between all that are responsibilities as a member of the board of directors for PASA, the Pennsylvania Association of Sustainable Agriculture, lectures, writing and doing cooking demonstrations.

What about personal time? He cooks for friends’ parties. Moore also spends twelve hours one Saturday a month in the Mt. Lebanon Baptist Church kitchen, preparing meals. Sundays he reads the most current national food magazine.
“I find recipes that I can make for the week,” Moore says. “Then I head to market. I start off making either sauces or stocks, then cook the lunches and dinners, mostly risottos and one dish meals.”

Moore also cooks up jams, makes Italian salamis, pickles cucumbers and experiments with making beer. He’s gone to the extent of boiling grain to get his own yeast. “I like to see how things work from scratch,” he explains.

A native of Greensburg, Moore knew that he wanted to work with food from the time he began helping his grandmother, Angelina Caparelli, cook when he was a child.

“I would sit in the kitchen on Christmas Eve with my grandmother while the rest of the family watched football in the other room,” remembers Moore. He helped her with that holiday’s Feast of the Seven Fishes, a tradition he tries to continue.

“Cooking was just something I always did. In fact, people asked me cooking questions.” Moore continues. “I was also a latchkey kid. My mother asked me to do the cooking and my sister to do the cleaning.” By the time he was eight, Moore had graduated to making omelets for the neighborhood. “I had to stand on a stepstool to do it.”

The path from neighborhood omelet chef to today’s total food immersion professional was a gradual but definite progression. Moore trained as a chef in the navy, then graduated with a degree in Hotel, Restaurant and Institutional Management at Penn State where he met his wife, Michelle. After graduation, he worked for Hilton hotels in Washington, D.C., moving to Pittsburgh as Director of Purchasing for the Hilton. But he always wanted to work exclusively with food. In 2000 he was able to do so when began his career with Eat ‘n Park.

Much of Moore’s wisdom is useful for home cooks who want to live a healthy, sustainable life style. It requires constant vigilance.

“There’s a lot of consumer confusion,” says Moore, who advocates reading labels carefully before purchasing. There can be “absent labeling,” which means that information isn’t stated. “The growth hormone RBST (Recumbant Bovine Somatropin) is not required to be listed, although it’s not in organic milk.” he continues. A bottle of a juice drink may say, for example, organic carrots on the front, but the ingredient listing on the back includes apples without specifying whether or not they are organic.

“Natural isn’t even a good guideline because it means nothing by USDA (United States Department of Agriculture) standards.” says Moore. “You can put natural on anything. I found “natural ingredients” on a boxed, non-refrigerated butter product. Natural? Really?”

The waters get muddier because many local growers use CNG (Certified Naturally Grown) certification, which is not under USDA auspices, instead of organic.

“There are “dirty dozen” lists which are good tools, but instead of being a slave to lists and requirements, eat seasonally,” advises Moore. He personally uses a straightforward purchasing hierarchy. First select local, then USDA USA grown organic, then finally USA grown conventional products. A spray made with a dilute white vinegar/water solution helps to remove pesticide residue.

Moore recommends using the Monterey Bay Aquarium Seafood Watch guidelines when selecting fish. Find a local farmer for beef purchases.* In general, try to know the source of your food.

Not everybody can involve themselves with food to the extent that Jamie Moore does. But we can use his learned advice as a guide. To our personal—and the earth’s—betterment.

Bruschetta: Definition – From the Italian bruscare meaning “to roast over coals,” this traditional garlic bread is made by rubbing slices of toasted bread with garlic cloves, then drizzling the bread with extra-virgin olive oil. The bread is salted and peppered, then heated and served warm.

On a grill (barbecue), cook the red pepper until the skin is charred black. Once the skin is black, place the pepper in a paper bag and set aside for later.
In a shallow casserole or serving bowl, place the remaining ingredients.
Take the peppers out of the bag and chop into ½ inch pieces and add to the other ingredients. Refrigerate for at least 2 hours. This mixture will last for about 1 week.

Cut the baguette into thin slices. In a small bowl, add minced garlic, olive oil and salt pepper. Take the mixture and brush each piece of bread. Add the bread to the grill and toast until both sides are toasted.
Serve the bread with the roasted pepper salsa.