t. Lebanon residents have a wealth of playtime opportunities: With a golf course, an ice rink, a pool and 16 parks, spread out over 200 acres, there’s something for everyone. It’s a great place to play, but can we make it better?

Last year, Mt. Lebanon engaged the firm of Environmental Planning and Design (EPD) to complete a parks master plan and a feasibility study for the possibility of a new recreation center.

Assistant Manager/Planner Ian McMeans headed the yearlong study, working in cooperation with Carolyn Yagle of EPD. Representatives from EPD attended community events last summer to discuss what changes users want to see in the parks, and to gauge interest in a new recreation facility. That outreach combined with an online survey yielded more than 3,000 responses, drawn roughly equally from each of Mt. Lebanon’s five wards.

“We recognize that stakeholders want quality open spaces,” said Yagle. “It’s challenging to balance all the information we received, but ultimately we put everything together and gave the municipality something they can use as a guide for both staff and elected officials.”

Several of the recommendations focused on diversity and inclusion—reaching out to groups that may not use the parks as much, such as older adults, teens and adults without children, and creating programming geared toward bringing more people into the parks.

The parks and sports advisory boards will prioritize the park-specific recommendations, which will then be presented to the Commission to provide any required funding and determine an implementation plan. The work could be performed by municipal staff or put out for bid to retain a contractor depending on the scale and scope of the improvements. Residents provided so much input on Mt. Lebanon Park that it may merit its own master plan, “to ensure park features complement each other and any improvements create a consistent vision for the park,” according to the report.

In addition to specific recommendations about parks, the master plan prioritizes its recommendations into two tiers. Tier 2 priorities are improving coordination with the school district on shared facilities, and deciding whether to develop a separate master plan for Mt. Lebanon Park.

The five Tier 1 priorities are: 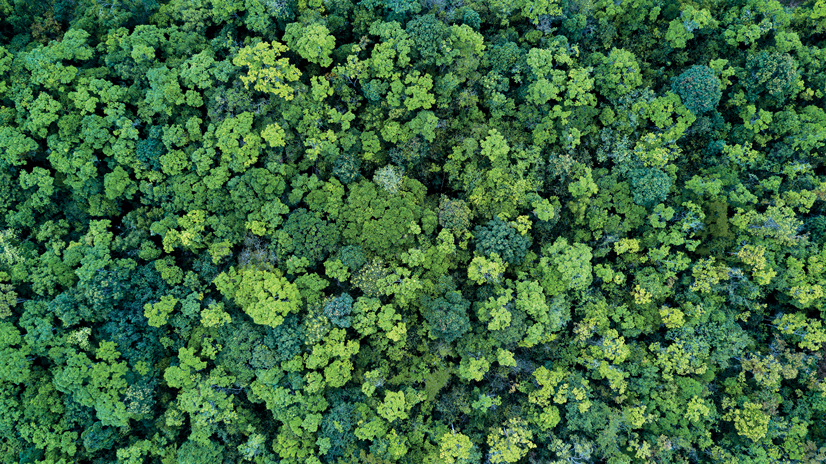 Use GIS (geographic information systems) technology to document a comprehensive inventory of trees, including species, size, canopy coverage and tree health. Other components of the inventory include mapping natural types of land cover, such as tree canopy, lawn, forest or meadow; mapping significant natural resources and areas of high biodiversity; inventorying passive recreational uses and reporting on the conditions of hiking trails. Once the comprehensive inventory is complete, the municipality can devise a plan for implementing any recommendations. Likewise, an invasive species management plan would begin with an inventory of all invasive plant and insect species and an assessment of the level of infestation.

Mt. Lebanon has $30,000 budgeted for the development of a forestry plan. 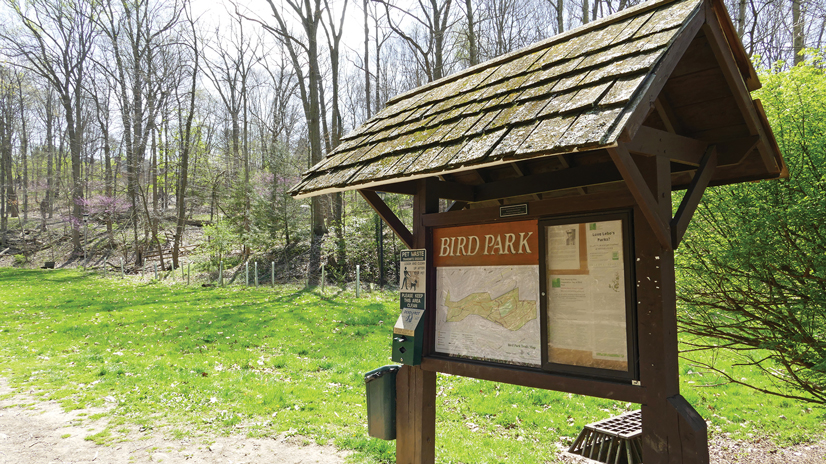 The report recommended “a cohesive signage system to create visual consistency for visitors entering or navigating the parks.” This would include welcome signs at park entrances, and wayfinding signage such as mile markers on hiking trails, which would aid first responders in emergency situations. Connectivity recommendations are geared toward improving accessibility through ADA improvements and upgraded parking, as well as adding bicycle parking and repair stations and improving connections among bike trails. 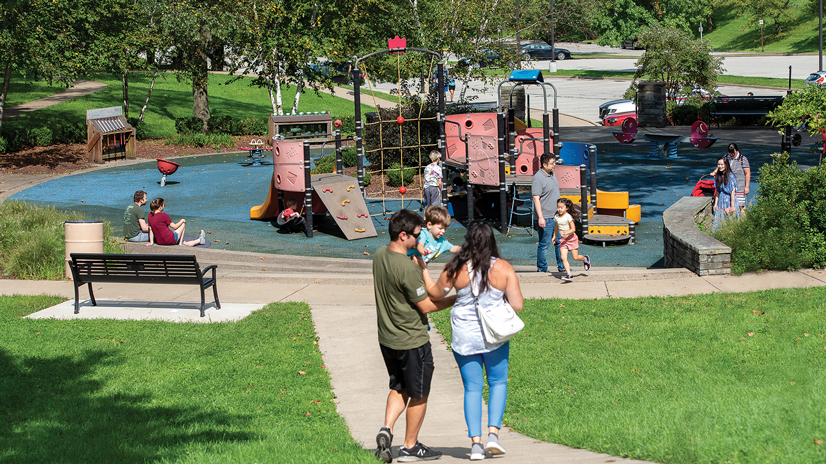 EPD created a matrix to guide Mt. Lebanon in making decisions regarding adding new fields and other facilities, and the maintaining existing park and recreation department property. The flow chart begins with basic staffing questions, and addresses the potential impact of adding additional lighting, dealing with drainage issues, converting  field surfaces, scheduling improvements, and other considerations. 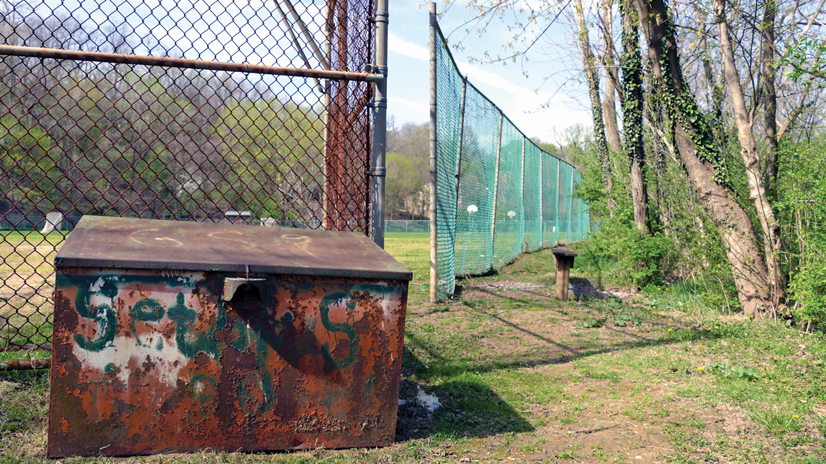 Survey respondents expressed interest in improving the field, which is underused because of drainage and maintenance issues. In 2013, Gateway Engineers proposed a plan to improve drainage and add parking at Brafferton Field, also converting the baseball diamond into a multipurpose practice field, adding a playground and a half-court for basketball. Making Brafferton Field more user-friendly would ease the strain on other sports fields in the community. 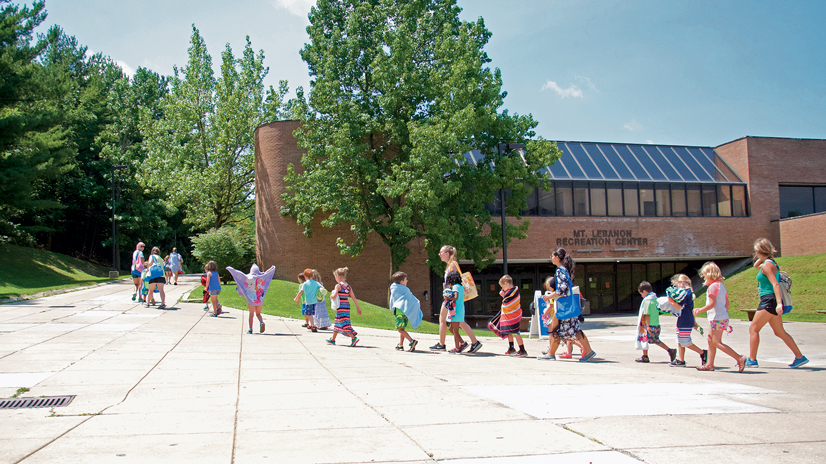 Ideas for a new recreation facility centered on three possible locations: Renovating the existing facility in Mt. Lebanon Park; an uptown location, most likely the South Parking Garage; and building a new structure in McNeilly Park.

Preliminary cost projections for renovating the existing facility is about $47.7 million. This would involve connecting the outdoor swim center with the facility, adding four basketball courts, eight pickleball and volleyball courts and a mezzanine walking track, exercise rooms with cardio and strength equipment and a child watch room, an adventure area featuring a climbing wall and an e-sports area, four classrooms and a kitchen and café. Expanding the existing center would mean changes to the park to accommodate the expansion and the need for additional parking.

An uptown facility would keep a walking track, but the number of sports courts would be half of what the Mt. Lebanon Park facility would contain. Likewise, there would be no space for an e-sports area, and the space could accommodate only two classrooms. Estimated cost is about $33.3 million.

Making Brafferton Field more user-friendly would ease the strain on other sports fieldsin the community.

Building a new facility in McNeilly Park with all of the amenities residents said they wanted to see would be the costliest option, at $87.1 million. The building would accommodate eight basketball courts, 16 pickleball and volleyball courts and a mezzanine walking track. The fitness areas would be similar to those in the first option—cardio and strength equipment in two small and one large exercise room, and a child watch room. In addition to the e-sports area and the climbing wall, the McNeilly Park facility could accommodate spaces for laser tag and miniature golf, along with arcade games and a virtual reality simulator. The space would be large enough for four classrooms, a kitchen and café and two team training rooms.

“Every site has tradeoffs, and the study identified those,” said McMeans.

“Feedback was positive,” said McMeans. “After the site analyses, the Commission can decide where they want to take the conversation in the future.”

The Commission will further prioritize the plan’s recommendations.

“We were just glad to get everyone together in the same room at the same time to discuss this,” said Yagle. “It’s a joy to be able to work with such a forward-thinking community.”

“I’m glad the study gave residents an opportunity to share their opinions and ideas regarding parks and recreation facilities in our community, and I hope it will lead to improvements that will benefit all citizens and visitors in the future,” he said.