The benches in and around Mt. Lebanon library are a favorite writing hangout for Chloe Barlow. Photo by Julie O’Hara.

It all started with the smell of peaches.

Ever since she can remember, contemporary romance novelist Chloe Barlow has enjoyed telling stories, reading, writing and figuring out the world around her. Chloe’s parents say that as a small child she was inquisitive and chatty. Appreciating his daughter’s penchant for storytelling, Chloe’s father, an emergency room physician, would come home from a shift and talk with her about his work. “He’d describe cases to me to see if I could figure out the diagnoses,” she says. This back and forth conversation, she adds, was their version of bedtime stories.

One night when Barlow was 12, her dad shared a mystifying case:  A patient had been rushed to the ER, seizing, foaming at the mouth, with his breath smelling of peaches. Barlow couldn’t imagine what was wrong with the patient or why he smelled like peaches. Dad and daughter chitchatted about it at length and finally, “My dad told me he diagnosed and treated this person for cyanide poisoning!” she says.

This unusual tale sparked the writer in Barlow. “My dad explained that the patient somehow had consumed too many peach pits. There is a small kernel inside of a peach pit that contains cyanide.”  Who knew?  The budding writer’s wheels began spinning as she considered penning a tall tale. “I asked my dad, ‘how many peach pits would it take for a person to die of cyanide poisoning?’” Ten to 15. Again, who knew? 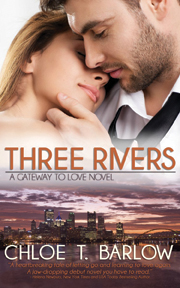 Within months, Barlow had written a captivating mystery that stemmed from this conversation. Her fictional story featured a neglected, lonely girl who befriended an elderly, outcast neighbor and chronicled how, together, they solved a baffling murder—cyanide poisoning with peach pits!

This short story captured a first-place regional award from a literary magazine contest—a competition whose entrants, by the way, were all adults. Barlow smiles and shakes her head as she thinks back, “Here I am, the only kid among a bunch of adults—with my big, goofy glasses on—going on stage, accepting this award!”

Fast forward to the present day, this Mt. Lebanon resident and practicing full-time attorney still feeds her curiosity with storytelling, now Pittsburgh style. Barlow’s planned five-part book series, The Gateway to Love, kicked off earlier this year with Three Rivers, a tale of  love, romance, humor, grief, suspense, mystery and unexpected surprises all set against the backdrop of Pittsburgh’s favorite landmarks. Helena Newbury, a New York Times and USA Today bestselling author described the book as, “A heartbreaking tale of letting go and learning to love again. A jaw-dropping debut novel you have to read.”   It garnered glowing reviews, along with plenty of regional and national fans of and even was featured in Elle magazine’s September 2014 issue. 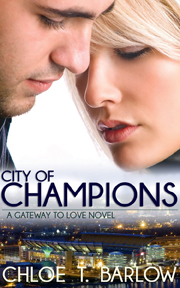 The second book of the series, City of Champions, released last month, should thrill fans of contemporary romance novels with a new cast of characters, replete with intense relationships and enthralling twists and turns. It’s set once again in Pittsburgh, featuring picturesque landscapes, familiar streets and favorite restaurants,

Not unlike her childhood efforts, Barlow does painstaking research to ensure readers can relate to her books. “I watch people. I notice the little things that have meaning,” she explains. Describing how she develops her characters, she says, “I am empathetic…I explore the dangerous sides of peoples’ virtues…how they react to difficult feelings…I explore the ‘what ifs.’”

In Three Rivers, the main character, Althea’s, husband dies. To be sure she could portray Althea authentically, Barlow met with a grief counselor to understand the range of emotions a person experiences with the loss of a loved one. Without this preparation, she says, the story couldn’t have flowed into the captivating romance that unfolds.

As she continues to write the last three novels of The Gateway to Love series and a self-described “Last of the Mohicans meets Outbreak” trilogy, Barlow capitalizes on any spare time she has to get the words to print. “The full plot comes to me quickly,” she says. “The chapters are in place. But if something comes to me, I’ll write it as it’s happening in my head. I write anywhere I can—in coffee shops, even on the Stairmaster. Technology is great!”

Although Barlow claims that the dreaded “writer’s block” doesn’t impede her writing, she admits she had to overcome some nervousness. Her novels are definitely for grownups—no bedtime stories here. “It was hard to open myself up to the world,” she says. “I mean, I write about tough choices and honest feelings.”

With resolve, she concludes, “I did the very best I could do. I wrote my own book for others to the best of my ability. To entertain. I wanted to make people happy.”

Barlow’s books are available on: Amazon (e-book, paperback), EBooks at Barnes and Noble, iBooks, and Kobo. Visit her at www.ChloeTBarlow.com. 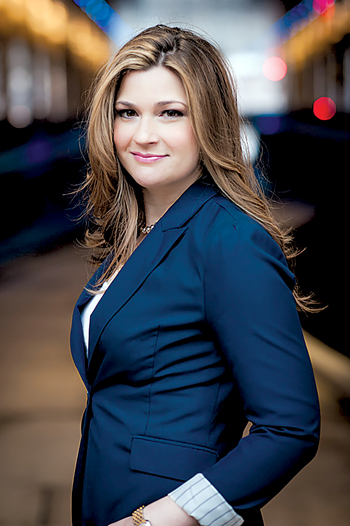 Getting to Know Chloe Barlow

Tell us about your family. My husband, Zak, has been an inspiration for some of the main male characters [in my novels] – he’s protective, stern, playful, intense, and sensitive at times. My Springer spaniel is named Lady. She is named after my favorite movie, Lady and the Tramp. Someday, we hope to adopt a rescue and name him Tramp.

You’ve lived in Mt. Lebanon for more than two years. What do you love about it? It offers a classic, traditional approach to community. I appreciate it here— love the shopping, the farmers’ market, my 1920s mission style home and the sunset views. I always feel like I live in a cabin in the woods. (Chloe plans to use Mt. Lebanon as a backdrop in one of her upcoming books from the Gateway to Love series.)

What is your favorite Pittsburgh landmark? I know it’s cliché, but the view coming out of the Fort Pitt Tunnel. My husband says there’s a reason some things are cliché!

What is your favorite TV show? Walking Dead. I love zombie movies and spooky stuff.

And for the funny stuff?   Modern Family.

What kind of music do you like? I am a huge music fan and prepare ‘soundtracks’ for each of my books – they are featured on my website and at the end of each book. Generally, my tastes are along the lines of adult alternative. I listen to WYEP quite a bit and like to see [artists like] David Gray at Benedum Center.

Tell about a great childhood memory. I loved spending vacations at the Outer Banks with my family. It’s still one of the most inspiring locations for me. So much so, that my husband and I were married there and I will set book five in my series there.

Do you have a most embarrassing moment? This is a tough question for me to answer because it’s hard to embarrass me. I’m pretty klutzy, though. An example was when I was in law school and the heel of my boot got caught in the strap of my purse that was laying on the floor. I went flying through the air and face planted on a desk. I ended up breaking my nose and having to get a tetanus shot. It was not my finest hour, that’s for sure.

If you could drive any vehicle – sports car, convertible, luxury sedan, pick-up truck, vintage car, motorcycle—which would you choose and why? At the end of the day, my sedan is doing it for me. (She laughs.) I’m a no fuss person. I mean, I’d like to have one of each on vacation. But, what I have is fine, so long as I have a good sound system and some technology.

If you could be anything in the whole world (and be good at it), what would it be and why? Honestly, it is to be an author whose books truly speak to people and bring them enjoyment. I also love painting and sculpting. It would be so neat to create illustrations to go with my books.