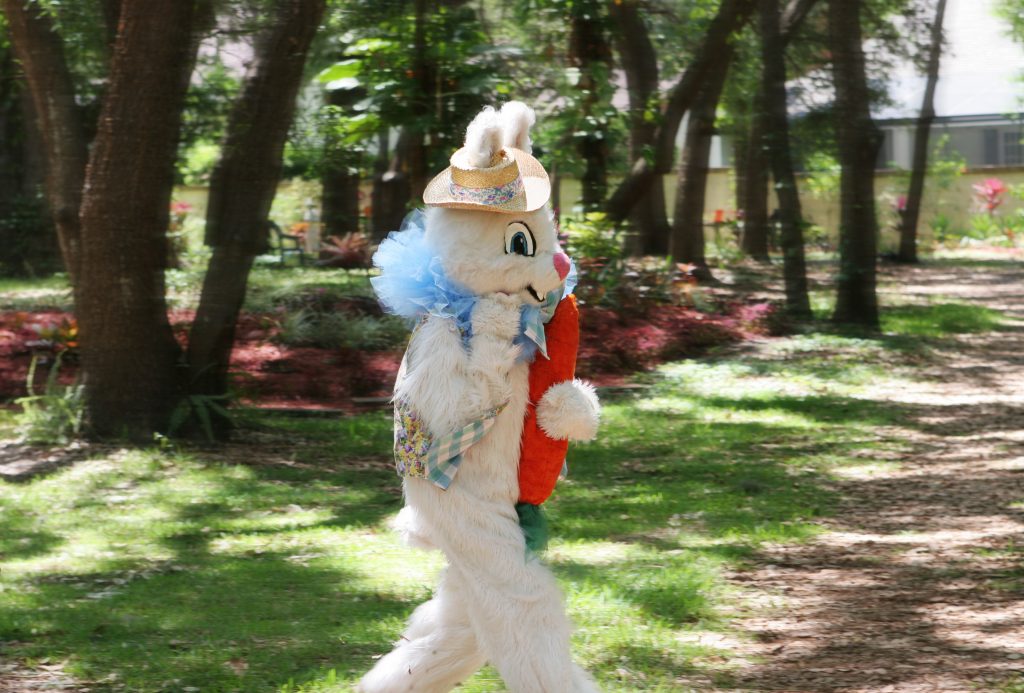 My husband’s cousin Jenny is the Easter Bunny. There. I said it. That has been a huge secret to keep in such a small town. Think of the number of times I had to pass the giant white creature outside of Target, on my way into Sephora to try on lipstick! Those big old eyes seemed to follow me up the escalator, warning me:  “Do not reveal my identity or else…” Or else what, as I’m not sure what kind of wrath could be brought by a leporid.

I found out while at the Mt. Lebanon Aqua Club banquet. See, it was one of those situations where a bunch of parents gather to honor a bunch of kids. While the kids all knew each other, the adults didn’t. At least we didn’t. After my husband and I finished our stint volunteering to set up the room, we took a load off. Soon the room filled with folks and my husband spied his cousin Jenny.

Jenny was kind enough to invite us to sit with her and a group her friends. They were friendly and interesting. One of them was an anesthesiologist. I quizzed her relentlessly about her profession, fascinated that someone who got paid to “put people to sleep” as she called it, was so vivacious. Soon enough, we got around to what everyone else did for a living. I was kind of feeling absurdly boring about being a marketing director already. And what did great web content ever cure for God sakes? And then it got worse.

Jenny’s friend started asking her if she’d had a good day “because it was SUPER busy at the booth.” The booth? I wondered. Was she a toll booth person? That wasn’t someone you met every day. With great casualness that would later haunt me, she replied, “Just another day at the bunny ranch” (or at least that’s what I heard.) It was the way she said bunny that made me ask.

When you say booth, what do you mean, I inquired. “I’m the Easter Bunny,” said Jenny as she reached for a roll. I was agog. This was incredible! I was sitting in the middle of the Mt. Lebanon High School cafeteria with the Easter Bunny. I peppered her with questions. “Is the suit hot? Are the kids terrible or is it great? Where do you get dressed? Do any weird adults bug you?”

She told me the trade secrets (which I take to my grave) and ended the description thusly: “Yeah, I’m the only Easter Bunny with a Ph.D.” Suddenly I realized, even imaginary characters can have an existential crisis.