When you’re watching a football game and a referee says, “The previous play is under review,” odds are the official is utilizing Mt. Lebanon resident Brian Lowe’s DVSport technology. Lowe, president and CEO of DVSport, has powered his company into the forefront of instant replay technology.

Lowe’s success story began in Mt. Lebanon where he was a standout in soccer, football and basketball and also had success in baseball and track. During his senior season in fall 1984, he helped lead the Blue Devils to WPIAL championships in both soccer and football—dual sports, same season—an unprecedented accomplishment.

Soccer helped pave his way to Boston College. After playing one season of soccer there, he decided to take a shot at walking onto the Golden Eagles football team as a kicker. Not only did he get the starting job as a sophomore, but he got redshirt freshman eligibility. Over the next four seasons he became the all-time leading scorer in Boston College football history—a record held for 20 years. In 2003, he was inducted into the BC Hall of Fame alongside the likes of Doug Flutie and Bill Romanowski.

After graduating in 1990, Lowe attempted to make his mark in the NFL as a professional placekicker. He used his leg to be a part of the Miami Dolphins and the Houston Oilers. He later had tryouts with the Steelers and the Los Angeles Rams, but was unable to latch on.

Lowe turned that disappointment into a positive, joining the coaching staff at Washington State University. As a graduate assistant, he worked with quarterbacks Drew Bledsoe and Ryan Leaf, among the greatest passers in school history. After five years in the Great Northwest, he joined Walt Harris’s staff at the University of Pittsburgh, where he worked with special teams and—most important for his future career—ran stats reports and prepared video for the team.

Combining video knowledge with playing and coaching experience, Lowe then took a job off the field with Avid Sports in Massachusetts, a startup company where he worked with engineers meshing video technology with computer data to build a sports product. “The position at Avid Sports was a great experience,” says Lowe, “but the resources of the company proved to be limited in addressing the wider coaching profession beyond just the top tier college and professional market.”

That’s why in 2001, Lowe returned to Pittsburgh and started DVSport. His unique computer software links encoded video with data, so it can easily be stored and filtered electronically. Coaches and players can review video to learn from on-field mistakes and prepare for future competition. 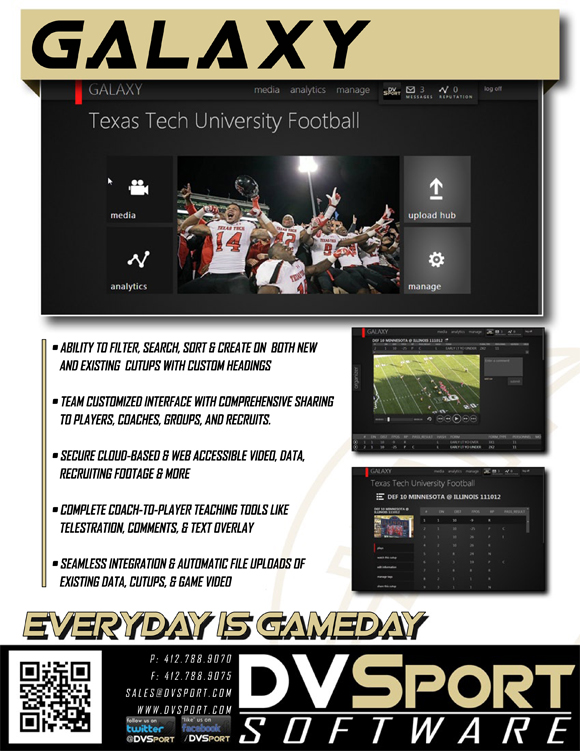 Fittingly, Lowe’s first client was the Mt. Lebanon High School football program. “John Grogan [MTLHS athletics director] and [coach] Chris [Haering] were instrumental in providing DVSport the opportunity to develop video editing and data analysis software,” says Lowe. After proving that the product worked at the high school level, Lowe pitched it to Pitt and the Steelers. They bought in, and from there it took off.

Mt. Lebanon resident and Steelers video coordinator Bob McCartney has embraced DVSports technology. “Years ago, players would ask me to make them a VHS tape to take home,” said McCartney. “Now DVSport technology is available on iPads as a digital file for the players and coaches. Both Ryan Clark and Troy Polamalu watch multiple games each week to prepare for specific opponents.”

Other local schools such as Duquesne, IUP, Westminster, W&J, Robert Morris, and Waynesburg quickly adopted DVSport. Today, 12 NFL teams, eight CFL teams and more than 160 college and high school football programs use the software. With more than 300 clients, the software also has been adapted for other sports. DVSport provides software solutions to Mark Cuban’s Dallas Mavericks of the NBA and to women’s basketball powers such as Connecticut and Notre Dame.  On the men’s basketball side, Gonzaga, Pitt, Connecticut, Davidson, Notre Dame, UCLA and Arizona State are some of the better-known clients.

As with football, Lowe’s basketball division would not have reached such heights without beta testing by the Mt. Lebanon boys and girls basketball programs—something Lowe appreciates. “Without the help of the teams at Mt. Lebanon, I would not have been able to perfect the product and offer it to college and professional programs,” he says. 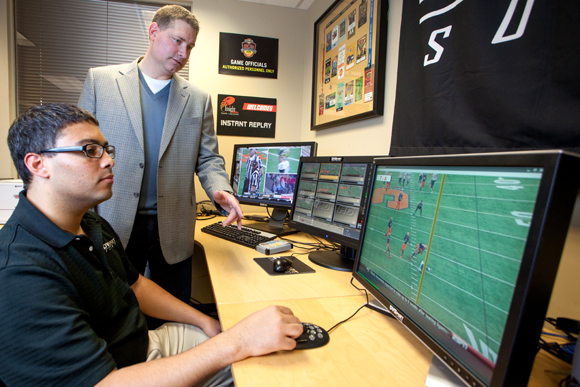 Located at Penn Center West in Robinson, DVSport now has more than 35 employees. The company has exclusive football and basketball deals to provide instant replay service for several major college athletic conferences, including ACC and Big 10.

The instant replay division may be what Lowe’s company is most recognized for, but its other services are gaining momentum. Last season, DVSport signed on with the NFL to provide its new StillShot technology to all 32 teams. StillShot produces still photos of every play during the game to provide instant analysis for players and coaches on the sidelines and in the coaching booths.

This year’s Daytona 500 winner Jimmy Johnson and Hendrick Motor Sports are among a growing number of NASCAR clients, and the Pittsburgh Penguins are testing DVSport’s new iPad LiveReplay on the bench during home games. Lowe also is eyeing the 2016 Rio De Janeiro Summer Olympics. Pending Olympic IOC approval, DVSport could be the official instant replay and video software provider on the biggest stage in the world.