I don’t ask for much. OK, yes, I once asked for a pony, but I was 6 years old at the time. I do, however, require a basic level of comfort. For instance, I don’t think it’s extravagant to turn the thermostat up past 62 degrees in January. My husband may be walking around barefoot saying, “It feels fine in here to me,” but I’m wrapped in Snuggies and still have no feeling in my fingertips.

Comfort vs. luxury began duking it out 11 years ago when my husband, Scott, and I moved into our house. We had dreams of adding a second bathroom and turning the attic into a den, but we found ourselves facing a lot more pressing projects—a backdoor with a crack so wide you could read a book through it, old wooden windows that were painted shut yet still let in cold air, a leak in the chimney flashing that was making the interior walls bubble and an inefficient furnace.

Our 90-year-old house fought us at every turn. We thought replacing the exterior doors would be a quick, relatively inexpensive job until we were informed that the door frames were not regulation size and new special-order doors would cost three times that of “normal” doors. Removing peeling wallpaper revealed severely cracked walls. Digging out a few scraggly bushes in the front yard became a retaining wall rebuilding project.

We began prioritizing. Aesthetic projects—replacing a stained kitchen drop ceiling, installing new carpeting, ordering new awnings for the back porch—lost out to money-saving ones (insulating the attic) and safety issues (removing knob and tube wiring). There were also quality of life choices—such as the need for more than five electrical outlets in the entire house.

We lived with a lot of small inconveniences and annoyances as we addressed the larger issues. Soon after we moved in, the toilet began losing power with every passing flush. But when a plumber’s quote to replace it was roughly the same as our monthly mortgage payment, we decided to live with it. But nine years later, when we were basically living with an outhouse in our house, I knew it was bite-the-bullet time.

Scott insisted he could replace the toilet himself. “I can get a toilet for like $70 at Home Depot,” he said, adding a toilet replacement was “the easiest plumbing job there is.” Frantic to dissuade him, I called up list of his many, many past DIY projects, all of which had misfired with varying degrees of spectacularness; some destined to go down in family folklore like our own private Titanic.

“Please, this involves water and sewage,’ I begged. “I don’t want poop running down the walls into the kitchen. “

As I was making dinner a few days later, water began trickling down the kitchen wall and into a cabinet. Sensing an oncoming deluge, I went to the track for a run. For months I’d been trying to break two and half miles. That night I did three and would have kept going if they hadn’t turned off the track lights.

I will say this, once the water was mopped up, the cabinets dried and the ruined food tossed, the toilet worked…kind of. It flushed, although rather anemically and often requiring several additional flushes to empty the bowl. Scott insisted this was normal as it was a low-flow model designed to save water. “How does it save water if you have to flush it three times to get it to work?” I asked. Although it was July, our house was kind of chilly that night.

Over the next year, it got worse. It flushed, but unless it was really full (don’t think about that too much), it never completely emptied. Scott discovered it worked better if you held the handle down as long as possible. Quick trips to the bathroom became longer than the average TV commercial break. I stopped hosting parties and would visibly wince when visitors asked to use the restroom.

“Okay,” I’d say, “but first let me give you some instructions…” The list included a bucket of water and a plunger.

At that point friends stopped dropping by.

This summer, I hit my limit. “Is it too much to ask that I have a toilet that takes away what I put in it,” I screamed one morning when Scott innocently stepped into the bathroom to brush his teeth.

My tantrum, coupled with a serendipitous discovery of a skilled plumber with reasonable rates (it’s not an urban legend), was all it took. Well, 10 years, a hormonal breakdown and finding an affordable plumber.

My new toilet makes the most wonderful satisfying “whomp” noise as the handle is depressed. Waste disappears in a blinding surge of whitewater that is so beautiful I get goose bumps. For the first few days after installation, I flushed every time I stepped foot in the bathroom—even if I was just tossing something in the laundry basket. For the sake of our water bill, I stopped, but the desire to shout, “And away she goes!” after every flush still lingers.

Thanks to that toilet, I can truly say the most important things in life are the simple ones because I honestly cannot recall a single purchase or gift that has made me happier than my working toilet has.

Then again, I never did get that pony. 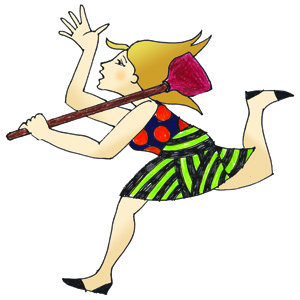