Mike Melnyk is entering his second season as Mt. Lebanon’s head football coach. In 2012, he helped lead the Blue Devils to a regular season record of 7-2—good enough for a share of the conference title and a WPIAL playoff berth. After defeating Butler, 31-7, at home in the first round of the postseason, Lebo fell on the road to Seneca Valley, 32-13, to end a promising year that the Blue Devils hope to build on in this season.

Lebo has to replace many key starters from those who graduated one season ago. “We only have five returning starters on offense and four on defense,” said Melnyk. “I think we have a ‘blue collar’ group of kids. We’ve raised our expectations, and we’re just trying to make them the best football team they can be.”

One of the positions in the spotlight is quarterback. Junior Kellan Stout will take the reins from Tyler Roth, who became the pr most prolific passer in Mt. Lebanon history in 2012. Roth is now entering his freshman year at Princeton.

“Kellan has some big shoes to fill,” Melnyk said. “He’s preparing everyday. We know he’s a good athlete. He finished fifth in the state in wrestling last year.”

Melnyk is looking to two seniors in particular for leadership on and off the field. Alex Bookser is one of the most highly recruited linemen in the country. At 6-5, 295 pounds, he’s narrowed his list of scholarship offers to a final eight—favoring Penn State, Ohio State, Michigan State, Northwestern, Alabama, Tennessee, Virginia and Pitt. Wide Receiver Troy Apke has already made his decision—he’ll head to Happy Valley to attend Penn State next season.

“Both of those guys are Division 1 players for a reason,” said Melnyk. “They can disrupt the game in a good way and make a lot of plays.”

Melnyk expects senior tailback Jake Rolfsen to have an improved season after playing most of last year in a cast. Junior Matt Hoffman is starting as lineman on both sides of the ball. Senior Eric Kinderman, also a two-way player, will make an impact on the defensive line and will also start at tight end.

The regular season opener on Friday, August 30, will find Lebo on the road taking on the 2012 PIAA state champions, North Allegheny. It will be a daunting task to bring down the Tigers on their home field, but it is a challenge Mt. Lebanon welcomes.

“We’ve obviously talked about this game,” said Melnyk. “The guys have used this game as motivation during the offseason. We always say if you’re going to be the best, you have to beat the best.”

Last season, the Blue Devils hosted North Allegheny at Mt. Lebanon Stadium. They lost the game 39-14, but then rallied to win their next seven games en route to the playoffs. 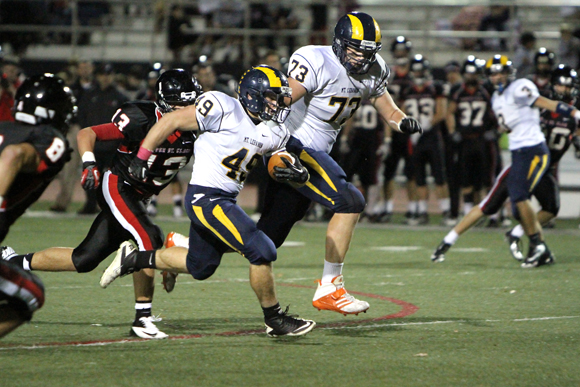 Mt. Lebanon will have to play eight very important regular season contests before they end the year hosting rival Upper St. Clair on Friday, October 25. The two high schools are  separated by just four miles. The players have grown up competing with one another their entire lives. It’s pretty simple. If you’re a Blue Devil, you want nothing more than to take down the Panthers.

In 2012, with the conference title on the line at Upper St. Clair, the Panthers partially blocked a last-second field goal attempt by Lebo. That was the difference in the game, as USC won 21-19. It affected playoff seedings, bruised some egos, and stirred the already heated rivalry up a little bit more.

“The two schools are really mirror images of each other,” said Melnyk. “They have the same kinds of kids, they are cut from the same cloth, and they even drink the same water. There’s a certain amount of bragging rights. It’s just a great rivalry.”

Many folks who grew up in Mt. Lebanon now live in Upper St. Clair and vice versa. In fact, Mt. Lebanon quarterbacks coach Mike Junko helped lead the Panthers to a state championship in 1989. Now his eyes are focused on helping Lebo take down his alma mater. That’s just one of many examples of how this rivalry tugs at the heartstrings in our area.

Melnyk doesn’t think there are many differences between the two programs. However, he said he could just think of one. “I’m a lot younger than [USC head coach] Jim Render,” laughed Melnyk. “I don’t think he’s going to like it very much when he hears that.” 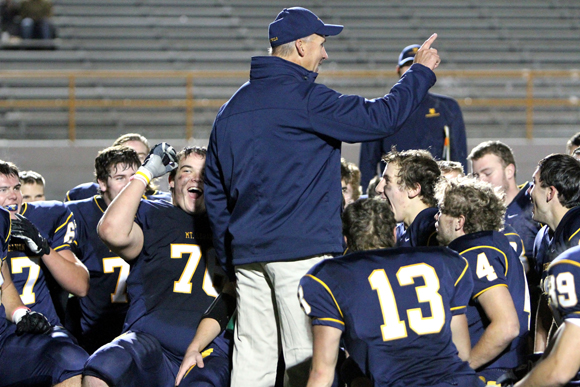