hen Isla Silva was 6 years old, she was drawn toward contact sports. Her mother, Theresa, who participated in volleyball and track growing up in Mt. Lebanon, came up with a plan to help steer Isla toward what she thought might be less dangerous activities.

“I heard about a free two-week trial for the wrestling program. I thought, ‘Oh, sign her up for that. It will get it out of her system,’” Theresa Silva said.

The plan backfired, but in the best possible way. Isla, now 10, has become quite an accomplished wrestler in a youth program where girls have just as much opportunity to thrive as boys.

Isla, of Shady Lane, got her good friend Camilla Hathaway, of Lovingston Drive, hooked on wrestling a couple years ago, and in April both became national champions at the USA Wrestling Girls Folkstyle Nationals in Iowa. Both 9 then, they won in the 10-and-under division, Isla at 75 pounds, Camilla at 90 pounds.

The girls traveled to Iowa with their fathers and an open-minded approach as far as expectations.

“We had no idea where our girls were nationally,” Jake Hathaway, Camilla’s father, said. “We were doing it for the experience and just to have an idea where their level was.”

They liked the answer.

Isla is extremely athletic—at 6 she was climbing ropes in the wrestling room to the ceiling and now is accomplished at walking on her hands and doing aerials, or no-handed cartwheels, Kocher said.

Camilla’s keystone is her tenacity; she outworks nearly everyone else, often hanging out and helping out at practice sessions other than her group’s.

Yes, they wrestle against boys—not only during training but also in meets. Sometimes, they enter both the girls’ and boys’ brackets at meets to get more experience.

“When Isla wrestles these boys … this cute little blond girl stepping onto the mat, and then she beats this boy, some of the parents are shocked, but oftentimes, usually it’s the mom, they will come up and give Isla a hug and tell her how good she did,” said Isla’s father, Jamie, a former safety for the Indianapolis Colts who now helps out with the wrestling practices. 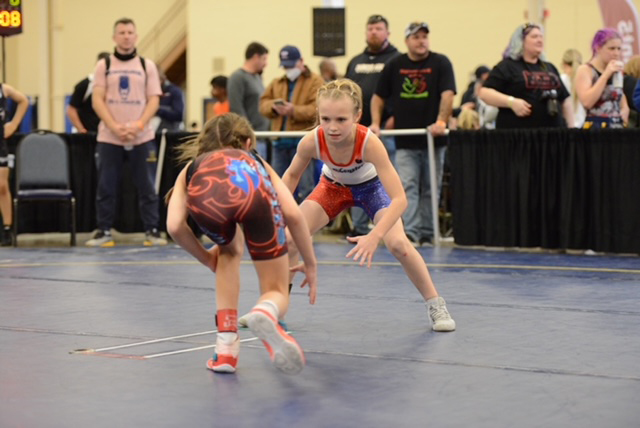 Yes, Isla and Camilla have wrestled each other. “I lost both times,” Camilla said, adding that it didn’t deter her one bit.

“She just loves it,” Camilla’s mother, Leah, said. “She just has this different tenacity now and confidence. She’s very shy, and this has helped that a lot.”

Both girls are involved in other sports, including tackle football, but wrestling would seem to offer a strong path. Camilla reluctantly gave up dancing at the Ballet Academy of Pittsburgh earlier this year even though she enjoyed being in The Nutcracker, according to her mother, because her schedule got too busy.

Kocher pointed out that by around age 14 or 15, the girls could have a chance to make national USA Wrestling teams and compete internationally.

Women’s wrestling became an Olympic sport in 2004, some colleges are offering it as a scholarship sport, and more than half the states have high school girls’ championships—but not Pennsylvania, despite having a strong wrestling tradition with outstanding college programs—Kocher was a high school state champion out of State College, and wrestled and coached at Pitt—and lots of high school boys who go on to do well in college.

Mt. Lebanon Youth Wrestling [1], which runs roughly November through March, serves as a feeder program for the high school team. While girls are eligible to compete on the boys’ team, the hope is that Lebo will add a girls’ team and the state will sanction the girls by the time Isla and Camilla get to that age.