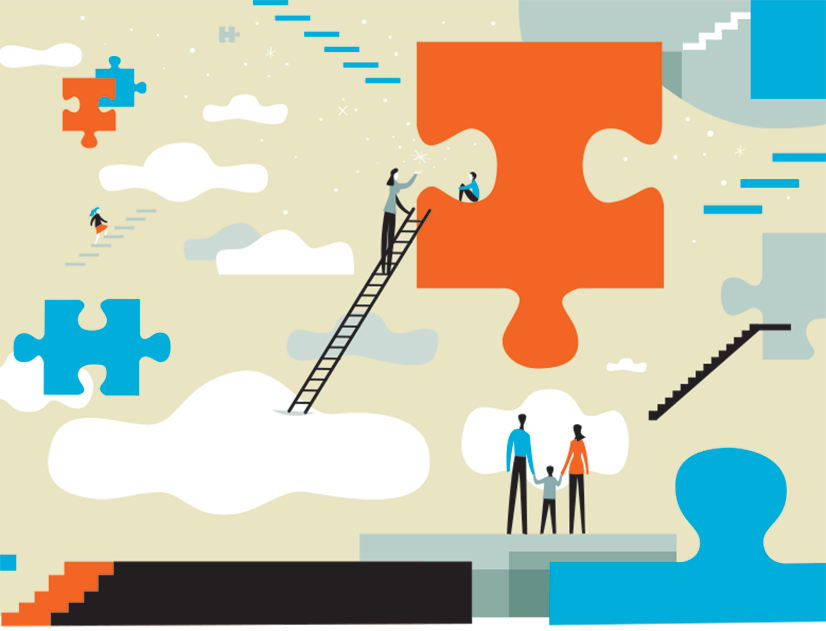 Sunset Hills resident Carolyn Jenkins* first knew something wasn’t right around her son Jason’s 18-month check-up. He seemed hyperactive, he wasn’t developing language, and had no concept of danger or embarrassment. At the time, she asked his primary care physician if he had ever diagnosed a 1-year-old with Attention Deficit Hyperactivity Disorder (ADHD). He laughed.

In fact, whenever Jenkins expressed concern to family members or health care providers, she was brushed off. So she waited. And waited. And waited, while trying to do everything possible to encourage language development.

Finally, Jenkins’ mom, a teacher, talked to a speech therapist at her school who recommended she contact the Alliance for Infants and Toddlers, an early intervention service coordination agency for families who have developmental concerns about children up to 3 years old. So began the evaluation and eventual diagnosis of autism spectrum disorder (ASD) when the now 6-year-old was 2. Jason’s younger brother, Thomas, now 4, received a similar diagnosis at 3. Jenkins wasn’t surprised, as she knew siblings, especially boys, have a higher chance of autism.

“I didn’t really care, truth be told,” Jenkins says. “We were already living with autism every day. In the end, I didn’t care what the piece of paper said as long as my child was getting the services he needed to help him.”

Autism’s diagnostic criteria focus on social and behavioral aspects. Many children are diagnosed with ASD after a comprehensive psychological evaluation with recommendations for treatment, support or further assessments. “During that journey, the parent(s) might become aware of additional needs such as emotion management, executive functioning, feeding/eating, gastrointestinal, learning, motor coordination, seizure, sensory, sleeping, speech and language, trauma, etc.,” Hahn says.

Why are the numbers of autism diagnoses seemingly increasing? In April of 2018, the Centers for Disease Control and Prevention updated the child autism diagnosis rate to 1 in 59, says counselor Paula Kauffman Oberly of PKO Counseling Services on Washington Road. The advocacy group Autism Speaks says that represents a 15 percent increase nationally; two years prior, it was 1 in 68 children.

Oberly says autism is being diagnosed more often because we have improved ways to diagnose children, even at the pediatrician’s office.

Despite what you may have heard, “Many people on the autism spectrum are employed full time in professional careers, are loving parents, do make eye contact during conversations, do have average intelligence, do have meaningful, close relationships, do seem ‘typical’ to community members and do express empathy for others,” Hahn says.

Basic things most children can do independently take twice as long for the Jenkins boys. Getting dressed, eating breakfast and putting on shoes are major hurdles. “Some tasks such as brushing teeth are highly aversive to most children on the spectrum and are struggles every day,” says Jenkins. “Let me repeat that. EVERY SINGLE DAY. Imagine basically holding down your child to floss and brush.” Going to the dentist requires attending the dental clinic at UPMC Children’s Hospital of Pittsburgh, where they’ll be sedated for a basic cleaning.

In Mt. Lebanon’s walking community, getting to and from school is difficult—especially in the rain. It’s impossible for Jenkins to carry an umbrella while she is holding both boys’ hands, which is necessary to prevent them from running into the street. Occasionally, Jenkins will park in the school drop-off area with a handicap parking permit, because parking far away is challenging. “Every day school pickup is a high-stress time for me,” Jenkins says. “It’s a workout physically and emotionally.”

Parents of children on the spectrum assume many roles. They have to be educators, therapists and dentists. Just keeping track of everything is exhausting. Jenkins and her husband work different shifts; she works weekends and he works most every weekday and night. Their child care is expensive and their children can’t attend typical day care or have just any babysitter.

Families dealing with autism typically use many services, including behavioral, occupational, speech and physical therapies. Families also use wraparound services, programs that offer support during real-life settings, like holding a parent’s hand while crossing the street or taking turns on a slide at a park. In Thomas’ case, he has therapy at home with a therapeutic support staff (TSS) worker, with assistance from a behavioral
specialist consultant (BSC).

Thomas’ therapy includes 15-minute segments, such as a table activity, a break and free play, tracing his name and reading. The therapist builds a tower of blocks or shows Thomas a picture of one, and then he has to replicate it, followed by counting, listening to music and coloring. Then they might work on learning to answer questions about his name, address and phone
number for safety.

Wraparound services are hard to get in Pennsylvania. Jenkins says the average wait time to get into a program is eight months. “It’s like waiting for your child who you know has a diagnosis and needs help and YOU need help, but you can’t get anyone to help you or if you can find a private pay company, the co-pays per day add up, you could be facing $1,000 per month. Now some insurances through employers are straight up saying they will pay for NO autism services. Isn’t that crazy?!”

Mt. Lebanon School District has been working with the Pennsylvania Training and Technical Assistance Network (PaTTAN) Autism Initiative Applied Behavior Analysis (ABA) supports for the past several years to implement ABA/Verbal Behavior Intervention. This is an evidence-based intervention for children with autism, which means only using interventions that have proven effective.

Jason started kindergarten last year in an ABA classroom, which uses a curriculum similar to the work he did at home. The classroom is set up in stations. One teacher might work with one or two students at a time for about 15 minutes on each child’s programming. They work on specific tasks like labeling objects, or lettering.

The classroom has several paraprofessionals, therapists and a special education teacher. The team alternates working with each child so the kids don’t get too comfortable working with just
one person.

ABA differs from home therapy because it builds the foundation for classroom learning. Children on the spectrum also work on interacting with peers, sitting at an assembly and going on a field trip—things that can’t be taught individually.

A student with an ASD diagnosis might get extra time to take tests, turn in homework or get to and from class. Help with class notes, or preferential seating to avoid distractions are other
typical accommodations.

All the families interviewed for this story praised the Mt. Lebanon School District. In fact, Doyle says several parents told her they moved to Mt. Lebanon because of the intervention program. Casey Kalahari, whose seventh-grade son has ASD, calls Mt. Lebanon’s faculty and teachers some of the best they could hope for. Jenkins and her husband, both Mt. Lebanon graduates, looked at special education and typical programs since their oldest child isn’t on the spectrum. Mt. Lebanon stood out because it has ABA classrooms. “I have been so impressed with Jason’s teachers,
paraprofessionals, therapists and school staff,” says Jenkins. “They have been so phenomenal!”

Despite the praise, Kalahari says she’s never met a family who didn’t feel that more could be done. “It is hard to hear [all the money spent on] sports when resources are limited for a child who is struggling emotionally, physically and academically,” she says. “The services an autistic child could receive in school can drastically affect that child’s whole life.” 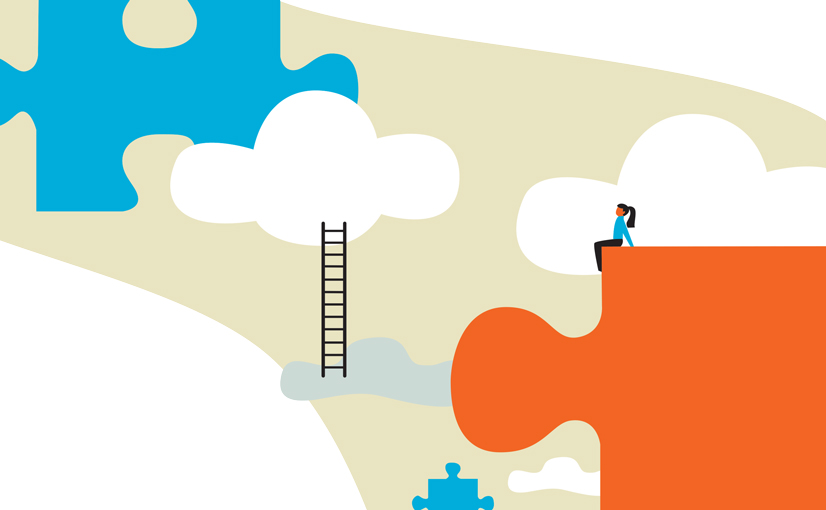 Jenkins says she has terrific neighbors, she feels welcome in Mt. Lebanon and knows if her son were to end up lost Uptown, someone would keep him safe and call her.

Yet living with autism is isolating and lonely at times for the caregivers. Having two children with autism is the hardest thing Jenkins says she’ll ever do or experience. She calls it beautiful and gut-wrenching at the same time. “Just seeing little kids interact with their parents or play Ring Around the Rosie or tag together is enough to provoke tears, because my kids may never get to that point,” she says. “We miss out on a lot of ‘normal’ things.” Because of this, the small acts of kindness that moms and neighbors have performed really stick with her, like the time another mom helped place Jenkins’ remaining groceries on the belt when her two boys were crying and trying to escape the grocery cart.

For these families, knowing that they’re not alone is a great source of strength. Jessica Goodson hadn’t met another parent with a similar child in Mt. Lebanon until recently, but she soon started ALAN (Ausome Lebo Autism Network) for parents with a child on the spectrum. The group meets the third Tuesday of each month at Uptown Coffee.

What can you do to help? Jenkins says if you see these families struggling, pitch in or ask if they need help. Invite them to activities—even if they can’t attend, a nice gesture makes them feel typical and included. Teach your children that everyone is different. “In the end, we are just like you, looking for acceptance and belonging,” says Jenkins.

*All family names have been changed to protect their privacy