For Louie Lambros, it all started with just one question from his friend, Oskar Karst:  “For what other team can you dress up like its namesake, and look cool?” The two friends thought about it. The Mets?  No. The Cardinals?  Nah. The Padres?  Well, yeah, you could dress up, but it really wouldn’t be too cool. But the Pirates?

YES!  And that’s how “Bucco Louie” came into being.

Lambros, Pat Haven Drive, and his friend were trying to decide what to wear to their first game of the 2010 season. At Karst’s suggestion, they dressed like pirates. “We put on everything we had,” says Lambros, “and we even made a few things.”  He enjoyed it so much that even after Karst moved away, Lambros continued to dress for the games.

His uniform has come a long way since those first days. Today, he is in black and gold from head to toe, including a vest with patches on the back from the World Series victories, which his sister helped him make. The front has the Pirate “P” and number 87. “Some people ask if that’s for Sidney Crosby,” he scoffs, “but I tell them no, it was the year the Pirates were founded (1887), and it also happens to be the year I was born (1987).”  Top all of this off with Lambros’s long red beard (which is real), long braided hair, black grease around the eyes and a bandana, and you’ve got the complete picture.

However, the outfit is just part of Lambros’s persona. He makes what he calls a “pre-game pilgrimage” that starts with parking in town or at Station Square, then walking through the Point. “I love crossing the Clemente Bridge and passing the Clemente statue, paying respect to the best player of all time. I take in the beauty of the city. I’m head over heels in love with Pittsburgh, it’s the greatest place in the world,” he says.

A few years ago, Lambros bought a 20-game ticket plan to ensure that he could get post-season tickets. He would sit in his seat for half of the game, then make his way toward the rotunda. “The Pirates are packing them in now and there’s more space up there, plus a nice breeze and a great view.”  It was there he met the Renegades of the Rotunda—other fans who dress in pirate garb—and they invited him to join them. Now he buys tickets to an additional 15 to 20 games. 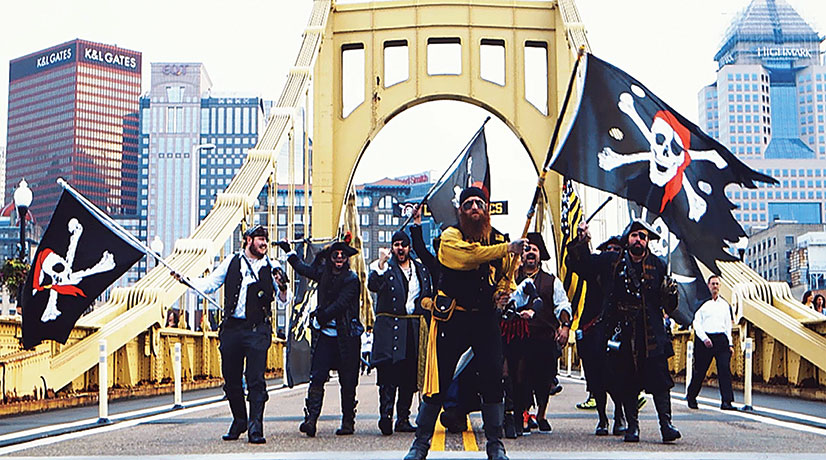 So what is he like when he is away from the ballpark?  Actually, pretty much the same but without the full Pirates regalia. Lambros works for Gateway Engineers, a full-service engineering firm that provides services to many municipalities including Mt. Lebanon. He admits his appearance “is definitely not the most corporate look, adding that “Sometimes they worry about me meeting with clients, but I do a lot of field work, which is outside, with the contractors.”

Once Gateway held a company picnic at a ballgame, and Lambros went dressed up in his Pirates gear. Pirates’ between-innings host Joe Klimchak spotted Lambros and invited him to participate in one of the contests. When his co-workers saw Lambros featured on the scoreboard, “They got a big kick out of that, so they let me slide a bit.”

Clients like him, too:  The borough of Emsworth sponsors a Halloween parade and invited Lambros to participate last year. He marched along with the Pirate Parrot and says it was “super fun.”

Lambros has developed quite a following at the games. He says parents love him and encourage their children to have their pictures taken with him. Sometimes the kids are a little hesitant about approaching this ferocious-looking pirate. “But I carry a little pouch with some gold coins in it, and they kind of warm up to me when I show them that,” he says.

Last season, when Lambros was heading for home after a particularly exciting game when Andrew McCutchen hit a 14th-inning walk-off homer against St. Louis, fans started to gravitate toward him. He was drawing quite a crowd, having his picture taken with fans, when all of a sudden a police car pulled up. He said his first thought was, “Am I going to get in trouble?”  But then one of the policemen yelled out, “Attention, pirate!  Raise your flag higher!” and drove away. It remains one of Lambros’ favorite moments.

He enjoys these times, but also believes some responsibility is involved. “You have to be willing to make the fans’ experience better,” he says. “You’re part of (the ballgame atmosphere), and you have to set a good example.”

No doubt he will, especially if he can keep raising the Jolly Roger higher.