At left: The gracious Athenaeum Hotel has welcomed guests to The Institution for generations. People love to relax in the rocking chairs (far right) that line the hotel’s front porch and watch the world go by.

Seven summers later, I was still thinking about this question and was challenged to find an answer.

The 750-acre Chautauqua Institution rises from the banks of Lake Chautauqua in Western New York—a seasonal “city on the hill.” It’s known as “Chautauqua,” “The Institution,” “CHQ,” and “The Grounds.” This year, it acquired a new identity when The Smithsonian Institute names it the “Best Small Town to Visit in 2014”.

Chautauqua has been described as a village, a resort, a community, a business (if you want to raise hackles), a way of living, a utopia and “home.”  Daily journalists, half seriously, suggest “a lingering Brigadoon.” This gated community, listed on the National Register of Historic Places, emerges in late June for a nine-week learning immersion experience. Religious and political discussion, the cultural arts and recreation attract a crush of 8,000 to 10,000 weekly visitors. The 2014 season began Sunday, June 22, and ends Sunday, August 24, after which The Institution will recede into solitude.

Chautauqua is the evolution of an idea spun in the minds and hearts of Methodist minister Rev. John Heyl Vincent and Ohio industrialist Lewis Miller in 1874. They fervently believed that learning, both religious and secular, should continue for a lifetime. Their vision did not necessarily require a place or time. At the end of his 1886 treatise The Chautauqua Movement, Rev. Vincent contemplated the future of Chautauqua in 25 years. “The Chautauqua of ideas and inspirations is not dependent upon the literal and local Chautauqua,” he concluded, adding, “May they long remain united, and each minister to the strength and glory of the other!” And they have.

If Rev. Vincent’s and Miller’s spirits roam the Brick Walk that links important Chautauqua venues—Amphitheater, Hall of Philosophy, Chautauqua Literary and Scientific Circle (CLSC) headquarters at Alumni Hall, Smith Memorial Library, Bratton Theater and Norton Hall—they must be gratified to see that generations of men and women have kept the literal and local Chautauqua thriving. Though a stroll through Chautauqua’s picturesque grounds may remind you of a bygone era, the programming strives and succeeds in booting nostalgia.  The philosophy informing the season discussion remains as Miller wrote in The Chautauqua Movement: “The churchman, the statesman, the humanitarian must be brought on her platform, and there, free from caste and party spirit, discuss questions, solve problems…”

The weekly themes prod the visitor to think about life today whether considering religion, history, literature, political or social issues. Could there be any more contemporary topics than this summer’s “The Ethics of Privacy” (week three) or “Emerging Citizenship: The Egyptian Experience” (week four)? 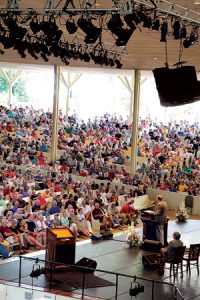 The physical platform to which Miller refers is the open air Amphitheater, the National Historic Landmark built in 1893. It is the nerve center of the Chautauqua program presentation literally and physically. Each weekly theme is explored at the 10:45 am lecture. The day begins there at 9:15 with an interdenominational service and sermon by visiting clergy and ends with an 8:15 pm symphony, ballet, opera, or popular entertainer performance. In addition to the 10:15 lecture, there is the 2 pm Hall of Philosophy lecture, musical performance, or demonstration by one of Chautauqua’s many organizations, such as the Women’s Club, the Bird Tree and Garden Club, the Oliver Archives or the Chautauqua Literary and Scientific Circle (CLSC). And you can walk or bike everywhere. 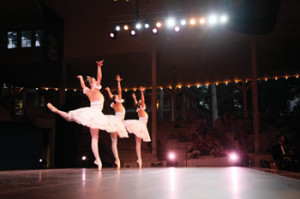 At Chautauqua, celebrity is casual and celebrities are gracious, Three years ago, Ken Burns was spotted waiting in the car line during Saturday “change day.” He revisits this year (week seven) to discuss his films. Jim Lehrer strolled into the Daily and talked with the young journalists for an hour. Last summer, Supreme Court Justice Anthony Kennedy visited unexpectedly and gave an impromptu lecture at the Hall of Philosophy. He had come to watch his ballerina granddaughter perform. One of my high points was meeting and interviewing author David McCullough.

Which brings me to a few of my favorite things: watching or listening to performance rehearsals in the nearly emptyAmphitheater; the listening room on the Smith Memorial Library second floor; the Oliver Archives; the CLSC banners at Alumni Hall; sipping a milk shake from the Brick Walk Café, and the Fourth of July pops concert finale, which awakens the patriot in all.

Since moving permanently from our longtime home in Mission Hills to our North Harmony house on Chautauqua Lake, another favorite thing is bumping in to Mt. Lebanon acquaintances that are regular visitors or own homes at Institution.

If you’re wondering, “Why Chautauqua?” you can get a sense of Chautauqua’s history by taking the guided bus tour. (Daily tickets are available at the main gate ticket office.) But perhaps a better way to understand the lure of this venerable place is to hear Mt. Lebanon people share their favorite things about the Institution:

Dr. Pat Albright: former minister at Mt. Lebanon Methodist Church, says, “It is the inclusiveness of the place.” The memory he and his wife Betty Lou, most cherish is “hearing Marion Anderson sing at Chautauqua!”

Carolyn Byham, a Chautauqua Institution trustee, says she and her husband, Bill, founder of the international company DDI, love the 10:45 lecture and the evening performance, especially the symphony. “We entertain guests from all over the world,” she says, and before leaving, they check next year’s program.”

Amelia Dean, the owner of Jaro Interiors, agrees that the morning lecture is not to be missed and enjoys the Sunday amphitheater worship service. “This is a place where you do not have to rush off—you can take time to be with a visitor, be present,” she says. Her husband, Steve, says, “Don’t forget the Golf Course. It is one of the best!”

Barbara Hois, who teaches flute at Pitt, calls the beach “a special place.” She spends a lot of time at the beach with her children and also suggests that parents “find the Spider Playground behind the Turner Recreation Center—It feels like the last secret place.”

Jeremy Hois, a Carnegie Mellon acting student, suggests, “Take a walk; enjoy the gardens and at least one dawn on the water. For Jeremy, Chautauqua is “a second home, an Eden of relaxation and learning.” Fond memories for him include playing small parts in both “Macbeth” and “Midsummer Night Dream” at Bratton Hall when he was a child.

Several Mt. Lebanon residents, including Kate Junker and Elaine Wertheim, teach in the special studies program at Chautauqua each season. Junker, a yoga instructor, enjoys the lectures, but she also loves the freedom to do as she pleases. “I jump on my bike and go everywhere,” she says. “You never need a watch. It is such a mental break.” Wertheim, and art and film teacher, insists visitors do two things:  “You must go to the 8 am Sunday Sacred Song Service to hear the organ play Handel’s Largo from ‘Xerxes,’ andsit on a rocking chair on the Athenaeum Hotel porch.

“You know the secret of Chautauqua’s allure is, and it may sound odd, the consistency yet variety!”

Just a thought. Maybe the phrase that captures Chautauqua for these Mt. Lebanonites could be, “Tradition is today”!

For an overview of programs, accommodations, recreation, etc. visit  www.ciweb.org

For shorter visits, the Athenaeum, the elegant Victorian Era hotel offers weekly, daily and weekend accommodations. Dining there is a treat.  800-821.1881.

There are children’s programs for all ages from early childhood to Young Adult. For information call 716-357-6290 or email Director of Youth Services, gpapania@ciweb.org.