Craft beer and home brewing have made a splash in the United States and don’t seem to be going stale anytime soon. The national trend is reflected on local menus and by the growing number of breweries popping up in and around Mt. Lebanon.

When Robb Full, his girlfriend Melissa Whittier and his high school buddies, Brandon Smith and Greg Ripper, purchased the Korner Pub on Bower Hill Road, the joint had a long-standing reputation as a smoky dive bar full of old guys and beer kings like Yuengling and Budweiser.

Since the four friends purchased the bar in 2014, the place has become less smoky and less dive-y, And where macro brews once ruled the countertops, there is now a home for craft beer.

In the same year Full and his friends took over the Korner Pub, craft beer sales grew more than 17 percent nationally, while the number of regional craft breweries, microbreweries and brew pubs expanded by nearly 20 percent in two years, from 2012 to 2014.

Full, who previously worked at the Mountain Sun Pub and Brewery in Boulder, Colorado, has overseen the Korner Pub’s change from strictly traditional beer choices to a more diverse menu. He is in charge of the beer selection and aims for the perfect balance of old and new. “We have Yuengling and we have double IPAs,” he says. “It doesn’t matter what it is you love to drink, we have something for you on tap.”

For Full, the choice to add craft brews was simple. “It’s super if it’s locally brewed,” he says. “And if it’s good beer, there’s no reason not to bring it in.”

Full’s experience with craft beer goes beyond his six years at the brewery in Boulder. When he was younger, his dad belonged to a club that sent craft beer samples every month, although, “Back then, I wasn’t old enough to drink or appreciate the craft beer he got,” he says.

He thinks the craft beer and home brewing trend indicates that more and more people want local products. “People just seem to be really into discovering what it is in the beer that they’re drinking,” he says. “Kind of like how people are paying more attention to what is in their food and trying to go local.”

You can’t get much more local when the beer you drink is brewed out back. A brew pub is an establishment that serves beer that’s brewed on the premises. Mt. Lebanon saw its first brew pub open in 2014, when Gary and Serena Olden opened Hitchhiker Brewing Company, 190 Castle Shannon Boulevard, and began brewing right at the pub’s location. Patrons can taste fresh brews by the glass or take home a growler, a 32- or 64-ounce jug. 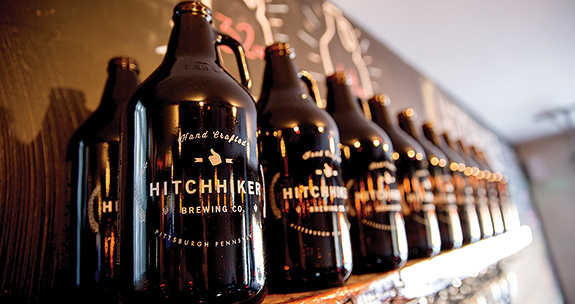 Much like the Korner Pub’s Full, Hitchhiker brewmaster Andy Kwiatkowski’s first experience with craft beer was with his dad, who used to “stink up the house” as he worked on home-brewed batches of beer. “Craft beer wasn’t as popular or prominent back then,” he says. “The only experience I had was what my dad brewed.”

Kwiatkowski eventually discovered his own love of home brewing. He continued to work his job at Verizon Wireless, while he participated in every brew competition he could find. About four years from the time he started home brewing, he accepted the position at Hitchhiker.

Kwiatkowski predicts that the craft beer trend will continue to climb. “Who knows when the bubble is going to burst,” he says. “There’s a lot of room to grow.” He does not foresee the macro brews like Yuengling, Budweiser or Miller Lite disappearing from draft lists anytime soon, however. “There will probably still always be a place for them too.”

What is the difference between a craft and a macro brewery? A craft brewery produces less than six million barrels a year, or about three percent of annual beer sales in the United States. A brewery is considered independent when less than 25 percent is owned by an alcoholic beverage industry member that is not itself a craft brewer.

Tiffany Thompson, who started home brewing as a hobby in 2004, embodies the independent spirit of small brewers up against traditional beer industry giants. With a graduate degree in developmental psychology, she worked as a treatment supervisor at Pressley Ridge and an outpatient coordinator at the Watson Institute before taking a chance on brewing for a living in 2012. She worked as an assistant brewer at Hitchhiker and then last August accepted a position at Church Brew Works in Lawrenceville.

Just like traditional macro-brewed beers, craft beers fall onto a scale ranging from simple to complex in taste and ingredients, says Thompson, whose husband, Scott, was a home brewer before her, while she made her own wine.

As of 2013, there were 1.2 million homebrewers in the United States and more than half began their craft after 2005. Almost 70 percent of home brewers have college degrees or some form of higher education.

Thompson says learning how to brew beer was similar to learning how to cook. It took her a couple of attempts, until she was happy with her end product. The wine making helped, as she already knew how to properly sanitize her equipment and what temperature would work best.

As a woman, Thompson is a minority in her profession, but she has found other female brewers. Thompson says the Pink Boots Society, an organization with more than 2,500 members that seeks to elevate women in the beer industry, has been a wonderful network for her. She also credits other local brewers who gave her the opportunity to show what she could brew: “I was very fortunate that the right people were willing to take a shot with me.”

Her favorite part about being a full-time brewer is the sheer amount of creativity her job allows her. “You would never find this in a corporate position,” she says. “Now I’m just answering to the customers and what they want in their beer…not board members.”

This month Pittsburghers will enjoy Craft Beer Week, April 15 to 24. It’s a great time to try craft beer at many of the local spots that offer it, including The Saloon on Washington Road, Atria’s Mt. Lebanon location on Beverly Road, which have hosted beer tastings and other events in the past, and Bado’s Pizza Grill and Ale House, also on Beverly, which has served up craft beer for more than a decade.

“Around 12 years ago we started bringing in beers that were different, not the traditional powerhouse beers,” Geena Badolato, daughter of owner Frank Badolato, says. Badolato added that her dad had to add more draft systems to the bar to accommodate all the new types of beer they brought to the restaurant.

Bado’s has participated in Craft Beer Week for the past few years and will offer special tastings from local breweries this year. For  a look at the special Craft Beer Week events planned by Bados’ and other area pubs, visit www.pittsburghcraftbeerweek.com.