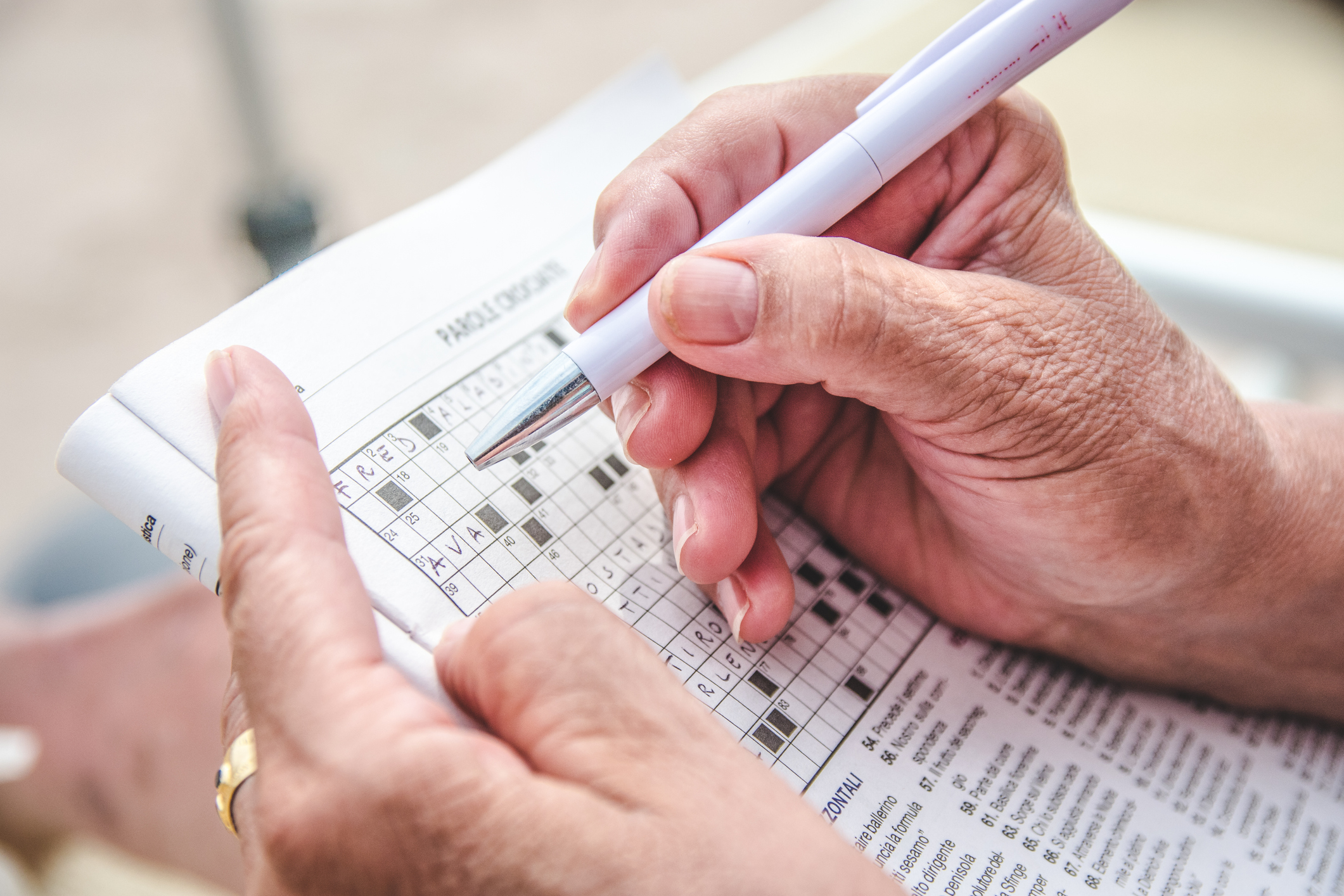 When I tell folks I’m a devout cruciverbalist, they ask if I belong to some quirky religious cult. Not so, I reply. Yet unlike Harry Truman—who once posed the question, “What the hell is a prothonotary?”—they then phrase their inquiry more tactfully. “Well, what exactly is a cruciverbalist?” they say.

A cruciverbalist is one who creates or solves crossword puzzles. Though I don’t create them, I sure love solving them. But that’s a blatant understatement–far more accurate to say I’m fanatically obsessed and hopelessly addicted. It’s not unusual for me to stay awake until 2 a.m. doing a crossword puzzle, doggedly determined to complete it down to the very last letter. When I am thoroughly engrossed like this, I could be oblivious to nuclear annihilation, and my spouse would be perfectly justified in divorcing me on grounds of chronic abandonment.

I crave my daily crossword puzzle the way coffee drinkers crave caffeine. Without it, I can’t function. That’s because I’m also a dedicated verbophile, one who is absolutely in love with words in all their meanings, derivations, pronunciations and interpretations. I bask in puns, anagrams, alliterations and double entendres. And being a verbophile is almost a prerequisite to becoming a crossword aficionado. I attack each new puzzle with exhilaration and expectation. What exquisite challenges await me? Especially when it comes to the daddy of them all, the New York Times Sunday crossword.

At first the Sunday puzzle may seem perplexing or arcane. I mean really, who knows the name of a Romanian-born writer who was once in the French Academy? Or what a World War I biplane was called? Or a former Soviet naval base? How esoteric can you get? But slowly and steadily, I fill in one of the easier answers, then another, and another, plodding along with a glacier-like pace akin to the persistent tortoise in Aesop’s fable, until at long last—maybe hours, maybe days later—the mystifying fog lifts from my faculties, and—ta da!—I figure it all out. What at first seems incomprehensible ultimately comes to light. Once I unveil the secret of the puzzle’s theme and unlock the door to the enigmatic clues, I experience an unparalleled Eureka rush—rivaled only by what Galileo, Newton and Einstein must have felt when they made their revolutionary discoveries.

Okay, maybe I exaggerate. But for a humble cruciverbalist like me, that aha (!) moment feels as victorious as winning Olympic gold.

Did you know people have only been doing crossword puzzles for little more than a century? The first published crossword puzzle appeared in the New York World’s Sunday newspaper on December 21, 1913, and was created by a journalist from Liverpool, England. Not only did Liverpool give us the Beatles, but it also bestowed Arthur Wynne, generally considered the inventor of the crossword puzzle. Wynne’s original puzzle was diamond-shaped without black squares, which he dubbed a “word-cross,” but during the printing process, the typesetter accidentally reversed the term, making it “cross-word” instead. The name stuck.

Although in England, simple word squares started to appear in children’s books in the 19th century as games to amuse a child, in the United States, more complicated crossword squares eventually invaded adult territory, becoming newspaper staples throughout the 20th century and rising in popularity around the country. In fact, the New York Times celebrated 75 years of publishing crossword puzzles in 2017 by inviting celebrities to create some, including luminaries like Bill Clinton, Rachel Maddow and Weird Al Yankovic.

I imagine the only thing harder than solving a crossword puzzle is constructing one, considering the linguistic hijinks and acrobatic phraseology entailed. But over the years, I have developed my own tricks to aid in crossword-solving. When doing a crossword, I always have a dictionary and a globe within reach, and naturally, Google Search on my smartphone! I know that clues with question marks mean the answers are puns, and it’s always easier to figure out a word if I have the first letter. It’s essential to consider multiple word meanings when analyzing clues. For instance, the word “bar” could mean bar of soap, candy bar, beer garden, or  something monkeys swing on. Knowing a few basic expressions in other languages goes far, and memorizing the Greek alphabet is infinitely useful. Clues about Star Wars, Star Trek, Lord of the Rings and Harry Potter frequently pop up, putting me at a disadvantage because I never watched/read any of the above. But most of the time, it’s a safe bet that Yoda, Princess Leia, Mr. Spock and Hogwarts are the likely answers.

Inserting one wrong answer—which I have done many, many times—throws the whole solution off. Frustration mounts and bewilderment turns to despair as I am stymied in my tracks. Like the time I wrote “neck” instead of “fret” for a part of a guitar or “apse” instead of “nave” for a feature in a church. Hope and enlightenment come only after I see the error of my ways. Even though a crossword puzzle is a big box with lots of little boxes, you often must think outside the box to get the answers! Sometimes there are words within words, phrases within phrases, words that go diagonally instead of vertically or horizontally, words that are backward, and more than one letter inside certain squares. But untwisting those contortions is definitely worth the trouble. Neurologists tell us that working the brain by doing puzzles helps ward off dementia. I’m all for that!

So why not give your brain a strenuous workout by challenging yourself to a daily crossword puzzle? Unravel those clues and flex those mental muscles. Here’s an easy one to get you started: