Pop quiz: What archaic, out-of-touch-with-reality institution is Pennsylvania still clutching in its unbending talons—the only state in the union to do so? If you guessed “The State Store,” you would be wrong, because Utah still has that system, too. So we’re tied for 49th in reasonable methods of alcohol sales.

No, every other state in America (even Utah) trusts its local police departments to use that newfangled technology called radar.
In Pennsylvania the use of radar as a speed control device is solely the province of the state police.

Coleman McDonough, Mt. Lebanon police chief and a retired state police deputy commissioner, has been trying to remedy that situation since taking over here in 2008. In 2010, McDonough testified in front of the Pennsylvania Senate Transportation Committee on the issue.

“In all of the really bad, fatal crashes I’ve seen, speed has either been the causal factor or a contributing factor,” he says.
McDonough says speeding is the biggest traffic safety problem Mt. Lebanon faces.

“Being able to use radar would be an additional safety tool,” he says. The last three state police administrations have favored the use of radar for local police, and there have been a number of bills over the years relaxing the restriction on radar, but most of them have never made it out of committee for a vote.

“The main argument that I hear is that local departments could possibly use radar to set up speed traps and generate revenue,” McDonough says. “But if that’s a problem, write something into the bill that prohibits excessive revenue generation.”

Also, that revenue that everyone’s talking about? Here’s how it breaks down: If you’re caught going 15 miles over the limit, your base fine is $55, and Mt. Lebanon gets half of that. All of the other surcharges, EMS, JCP, add-ons for second, third or fourth offenses, all of that goes to the state. So, say the total damage tops out at $150 or $200, or $400—Mt. Lebanon gets $27.50. If you challenge the ticket and the officer has to go to court, that $27.50 doesn’t even cover court pay.

So, as a revenue generator, speeding tickets are about as effective as the scratch-off lottery ones. 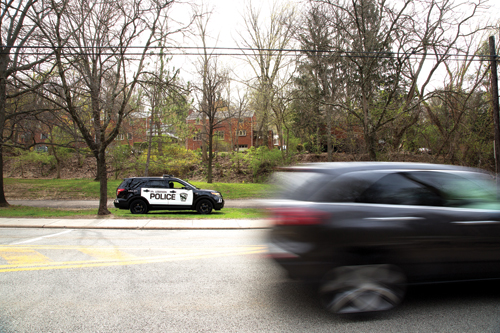 An Excessive Speed Preventer (ESP) is a system of two infrared beams laid across the road surface, separated by a calculated distance. As a car breaks the first beam, the device begins recording time. As the car breaks the second, the recording device stops and, using the known distance, calculates a driver’s speed. ESPs are time- and labor-intensive, as they require lengthy setup and calibration, and operating the device requires at least two officers in cars—one to calculate the speed and stay with the devices, which are expensive to replace if damaged or taken, and one officer to apprehend the speeder.

Tracker, another speed control system, is installed in most of the department’s patrol cars. While less labor intensive than an ESP, Tracker requires a lot of sight distance to perform effectively, and in a part of the country with as many hills and slopes and twists and turns as we have in western Pennsylvania, the places where itcan be used are limited.

“The topography’s against us,” says Lt. Duane Fisher, head of the Mt. Lebanon Traffic Enforcement Unit.

The third system is the one touted on many signs throughout the commonwealth, signs that read Speed Enforced by VASCAR. Vascar (Visual Average Speed Computer Recorder) is basically a guy with a stopwatch. A stopwatch that still needs to be recalibrated every 60 days, as opposed to a once-a-year check for radar.

Although all of these systems work—Mt. Lebanon Police have given out an average of 1,215 speeding citations a year over the past five years—each comes with limitations that radar doesn’t have.

“A WHOLE OTHER LEVEL”

Fisher says the five worst spots for speeding in Mt. Lebanon are Gilkeson, Washington and McNeilly roads and Cedar and Mt. Lebanon boulevards.

Under state law, drivers must be clocked at least 10 mph over the posted limit if monitored by a non-radar device. With radar device, that number shrinks to 6 mph. Imagine the number of speeders who fall within that 6-10 mph range over the course of a busy day.

“Try going 25 on Cedar,” says state Rep. Dan Miller. “You’ll have cars crawling all over your bumper.” Miller, a Mt. Lebanon volunteer firefighter and former commissioner, has been an advocate for relaxing the radar ban since way before he became a Pennsylvania legislator last year.

“As a volunteer firefighter, I’ve been called out on my share of crashes,” he says. “I’ve always supported the use of radar as another safety tool. That’s why one of the first bills I signed onto when I came to Harrisburg was one permitting local departments to use radar.”

The latest version of legislation that would allow local departments to use radar is House Bill 1272. Miller is one of 24 co-sponsors of the bill, which was introduced in April 2013 and has languished in committee ever since.

“I’m pretty vocal on this issue,” he says. “We need to get some movement in the house and the senate.”

At the local level, Commissioner Kelly Fraasch is making getting radar for local departments a priority.  “As I discussed this issue with residents, I would say about 95 percent of them weren’t aware that our local departments couldn’t use radar,” she says.
Fraasch has put together a website to educate residents about the issue.

Fisher says radar would be a more effective way of enforcing speed on residential streets because of its portability and the fact that an officer can set up with a radar gun out of sight.  It’s a pretty much a given that drivers slow down when they see a police car—even if they’re not speeding.

“When you have officers using a speed device out in the open, you will stop speeding in that place on that day,” Fisher says. “If drivers don’t know where the [radar] devices are, you can take safety to a whole other level.”