Mt. Lebanon’s year-old sports advisory board is a testimony to just how important sports are to residents of all ages. Its 13 members represent 11 sports organizations and include two at-large members.

In a nutshell, the board’s role is “to make recommendations regarding improving sports programming and facilities available in Mt. Lebanon.” That might sound pleasant, but it’s very hard work considering the various and often conflicting issues among the sports organizations and the challenge of operating programs and facilities cost efficiently.

Noting that there were 3,600 youth registrations for field based sports in 2013 and not enough field space or well-maintained fields to accommodate them, last year the board presented the commission with a proposal for field improvements. (Read the recommendations here [2]).

The board’s goals were: to increase usable field space; to include non-municipal contributions to offset the costs of improvements and to consider both initial and long-term costs. Among the board’s specific recommendations was that the municipality install 110,000 square feet of artificial turf, preferably organic infill, on Wildcat and Middle fields, which flank Cedar Boulevard. 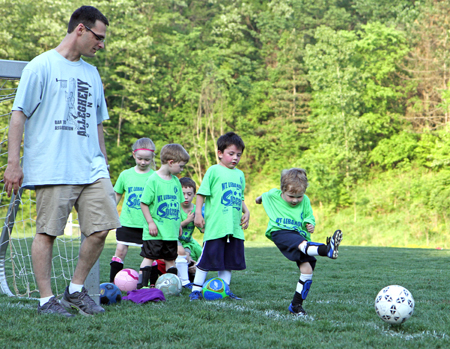 [3]The proposal was controversial, with some residents opposed because of the approximately $1 million price tag and others citing health or environmental concerns. After much discussion, however, the Commission agreed to allocate nearly $750,000 from the unassigned fund balance for the turf project with the stipulation that the sports organizations raise an additional $250,000. By February 24, the organizations had contributed $102,500 and contributions from other sources brought the total to $106,500, according to Franklin.

A newly formed Turf Task Force that includes sports advisory board members Franklin, Dalesandro, Auer and White along with Donnellan, Municipal Engineer Dan Deiseroth and Grogan has been charged with all issues pertaining to turf, such as field usage policies, fund-raising, organic infill and bid specifications.

Franklin, a Mt. Lebanon native who played on local fields as a youth, has been a strong supporter of field improvements for years. He is confident that the Turf Task Force can raise the needed money from three kinds of donors: sports organizations, individuals and sponsors. All donations will be managed by the Mt. Lebanon Community Endowment, which means the gifts will be tax-deductible, safeguarded and available when needed.

The fund-raising campaign is off to a good start. “We felt it was very important to have commitments from the sports organizations that use the fields before we started knocking on doors,” Franklin says. “With contributions from baseball, football, softball and (expected from) lacrosse and soccer, we are significantly on our way to achieving our goal of $250,000.”

There are a few national grants available for turf; however, Franklin thinks it is more likely that sponsorships will come from local companies who will donate in exchange for signage at the fields.

General community fund-raising will target parents of children who will use the fields, he says, noting that none of the committee members has children who will benefit from field improvements: “At the end of the day, it’s very much a youth initiative. But Franklin hopes also to raise money from adults who played on those fields as children and from people who will view the new turf as a fun spot for pickup sports, when nothing official is scheduled, just as people use the high school turf.

The time frame is tight—the Recreation Department would like to see contractors at work by August—so help with fund-raising is welcome. If you can volunteer some time, contact Franklin at davefranklin4@gmail.com [4]. [5]