By this fall, rainouts on soccer, baseball, football and lacrosse games played on Wildcat and Middle fields “should be significantly reduced,” says Recreation Director David Donnellan.  The Commission voted November 25 to fund the installation of artificial turf on the infields and outfields of Wildcat and Middle, which line Cedar Boulevard and are part of the municipal recreation complex.

The Commission allocated $750,000 in funds for the project—$637,400 from the undesignated fund balance and $112,000 from funds originally allocated for other recreational use. Sports organizations that are heavy users of those fields will be required to raise an additional $250,000 for the project and to also participate in fund-raising for the eventual replacement if the project is to move forward. There will also be an hourly fee for using the new turf. Members of those organizations who spoke to the Commission prior to the vote indicated that they are committed to raising the funds.

Donnellan is pleased with the Commission’s decision. “In terms of providing a consistently playable and superior athletic surface, this will unquestionably be an improvement,” he says. “An artificial surface will require fewer weather-related cancellations, allow more efficient scheduling and extend the season.  It will be a wonderful asset for the community.”

Currently, the only field in Mt. Lebanon with artificial turf is at the high school stadium. Wildcat and Middle fields’ grass surfaces have been a constant problem for sports teams, not only because heavy rain often puts a field out of use for several days, but also because heavy use makes it impossible to care for the grass properly or to ever let a field “rest.” 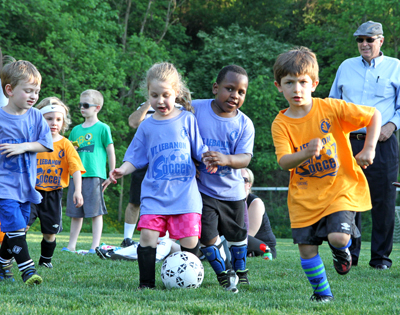 The Commission would like, if possible, to use a turf product with organic infill.  Once installed, turf would require much less maintenance than grass.  The high school turf maintenance consists of a regular “fluffing,” using a special machine so that the fibers don’t get matted and the use of a second machine with magnets that extract anything metal that is embedded in the turf. The plan is for the school district to maintain the turf, while the municipality would perform regular park maintenance of things such as bleachers, trash containers, parking lot, etc.

Donnellan has put together a task force that will present specific recommendations for the project to the Commission on February 11.  In addition to Donnellan, the team includes Municipal Engineer Dan Deiseroth, High School Athletic Director John Grogan and representatives from the Mt. Lebanon lacrosse, football, baseball and soccer associations.

The Commission’s directive was that the task force: create a strategy for field use and a fee structure to cover the non-municipal field user fee; develop a strategy for funding the initial non-municipal share; draft a maintenance agreement with the school district; develop a list of turf vendors, including those with organic infill, and create an RFP schedule with construction targeted to begin by August 1, 2014. Watch for a lebomag.com online article following the task force’s February 11 report to the Commission.