Mike Zmijanc, Pinewood Drive, retired in 2003 after 39 years teaching creative writing and American lit at Aliquippa High, but “Coach Z,” as everyone calls him,  has continued to lead the Quips football team to victory after victory. Head coach since 1997, he claims four WPIAL Class AA titles and one PIAA championship (In this season’s WPIAL finals,  the Quips were runner-up to South Fayette, which went on to claim the state title). He also coached basketball from 1996 -2003, winning three WPIAL and one PIAA title. This year, the Steelers nominated him for National High School Coach of the Year. 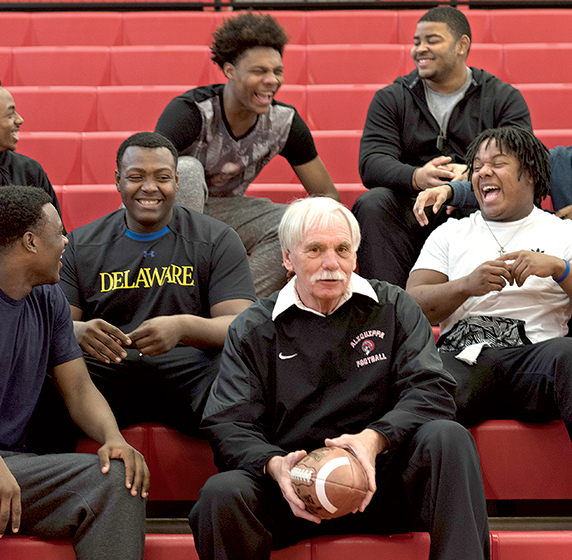 [1]YOU NEVER PLAYED FOOTBALL. HOW DID YOU BECOME A FOOTBALL COACH? I played basketball and a little baseball, but never any football. I was coaching junior high basketball when Don Yannessa, the head football coach at Aliquippa, asked me to work with him. I told him I never played, and he said “I’ll teach you everything you need to know.”

HOW HARD WAS IT TO LEARN FOOTBALL? Well, a lot of the angles and the foot maneuvers were the same as in basketball. I just had to learn the terminology, but driving to the basket and the way a running back moves are pretty similar.

WHAT’S THE BEST WAY TO MOTIVATE KIDS? Motivation is self-induced. I tell the kids, “Nobody’s making you be here. If you want to be here, if you want to do this, then let’s make sure you do it right, and do it well.” I don’t think I’ve ever had a kid with a bad attitude, unless it’s because he’s not playing enough.

WHAT’S THE BEST COACHING ADVICE YOU EVER GOT? Not everyone is me. Not everyone is going to want to put in the same amount of time and energy into something just because I’m excited about it. The second best piece of coaching advice I got was: “Save your sanity.”