Mt. Lebanon native Andi Perelman has been with the Pittsburgh Penguins since 2014, progressing from new media coordinator to manager, director and senior director of new media. She has a master’s degree in sports industry management from Georgetown University. 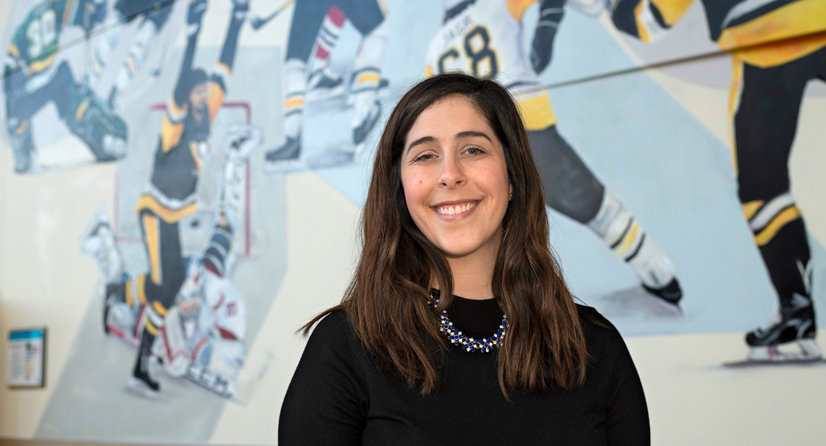 What’s the best part of your job?

I work with energetic, creative people, and I get paid to watch hockey. It’s hard to get better than that. The best though, is probably the special one-to-one moments with fans.

Two stories that stand out as favorites are the stories of Dwan Street and Kelly Sowatsky; both have special meaning to me for different reasons.

Dwan Street is a Penguins fan who lives in Newfoundland. Last year, she lost her hockey equipment in a serious car accident. A friend of hers tweeted at the Penguins to see if we could help. We were all immediately in agreement that we had to. We sent the equipment as soon as we had it—some brand new from Dick’s Sporting Goods, and some from the team vault.

She was so gracious and overwhelmed with emotion. She tweeted that when she saw the 412 area code pop up on her phone, she started crying immediately. That’s the type of moment that makes a lifelong fan and gives the Penguins the chance to bring our fans into our family.

Sometimes it feels like I get a chance to play fairy godmother in my job.

Penguins fans have a community. It’s very common to see season ticket holders who become friendly with the fans who sit next to them. When Kelly Sowatsky came to a Penguins game on March 31, 2018, she wasn’t there to just watch hockey. She also brought a sign that said, “Calling All Penguins Fans! I Need A Kidney! Kidney! Kidney! Gratefully Yours, Kelly.” That sign listed her phone number. When the new media team saw her sign during warmup, we wanted to help. We tweeted a photo of Kelly with her sign that read, “Penguins fan: Seeking hero.” I remember saying to another employee, “wouldn’t it be crazy if this actually worked?” Jeff Lynd, a Pittsburgh native living in Delaware, saw the tweet, he texted Kelly and said he wanted to get tested to see if he was a match. Less than one year later, Jeff and Kelly returned to PPG Paints Arena together as donor and recipient. I met them both and had the pleasure of watching them meet the team in the locker room. Two Penguins fans, brought together by hope, generosity, and a tweet. It was truly incredible.

So, it’s the ‘bibbidi bobbidi boo’ moments. That’s the best part of my job.

How do you measure your success? What’s a new media win?

I measure success by the hard numbers, but more importantly by the goal of the content. We want to create content that serves both our fans and our partners. We really look at each content piece individually and think about what it is trying to do. Do we want impressions or conversation? Do we want foot traffic or data collection? And then we benchmark, track, and continue to improve.

The Pens have won two championships since you’ve been there. Did you get a day with The Cup? How did you spend it?

I haven’t had the pleasure of getting my own day with the Stanley Cup, but I’ve had some pretty amazing experiences with it! I rode the incline with the Cup, strapped it in to a golf cart to deliver it to Mario Lemieux on the golf course, posed with Sidney Crosby and the Cup the night we won in 2017, and surprised fans with it at Eat ‘N Park on Father’s Day. I’m definitely happy with that–hopefully my summers are filled with more Cup-time in the coming years.