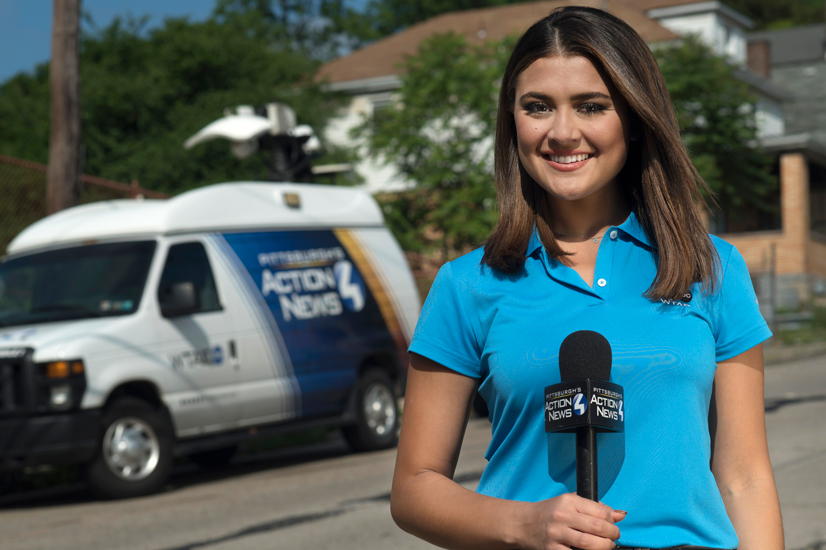 Though 100 percent deaf in both ears after contracting bacterial meningitis at age 4 (she hears with a cochlear implant), Mt. Lebanon native Elena LaQuatra is defying all odds. As a teenager, she was Miss Pennsylvania’s Outstanding Teen in 2007 and Miss Pennsylvania Teen USA in 2010. She was Miss Pennsylvania USA in 2016 and represented the state at the Miss USA pageant. In college, LaQuatra was a contestant on Greece’s Next Top Model, a coach on an episode of MTV’s Made, and appeared in a Super Bowl commercial alongside NFL legends. She earned a broadcast communications degree from Point Park University and was hired as reporter and anchor for Erie’s ABC news affiliate before returning to Pittsburgh last year to become a reporter for WTAE-TV.

Tell us about a piece of advice you were taught that has stuck with you.

I was taught to always be an overachiever in the workplace and give it 100 percent every day. The news business is especially competitive, with so few on-camera journalists per city. If you don’t give it your all every day, there’s hundreds of other people who happily will.

Why is volunteering so important to you?

The importance of helping others is something my parents instilled in me when I was young and something I’ve done through my life. In holding various pageant titles and now in my job with WTAE, I’m frequently presented with opportunities to give back. I always take advantage of them. To me, there’s no greater feeling than knowing you made a small, but positive impact on someone’s life.

What do you wish the community knew about people who are deaf?

People who are deaf or hard of hearing are capable of doing and accomplishing anything. I don’t consider my deafness as a disability, rather an ability because I have superhuman hearing, which is pretty cool! Secondly, if a person who is deaf or hard of hearing says “what?” or asks you to repeat yourself, that usually doesn’t mean they need you to talk louder. Often, it’s a matter of them needing you to articulate your words more clearly, speak more slowly, or make sure their view of your lips isn’t obstructed since many rely on lip-reading.