Foster School will celebrate its 75th anniversary on Saturday, October 8, with a community open house from 1 to 4 p.m. that will include entertainment, reunions among alums, a display of historic photos and memorabilia, and the opening and sealing of time capsules.

“I hope that Foster alumni and everyone who has been impacted by this school will be able to relive some memories and enjoy the special day,” says Foster Principal Jason Ramsey. 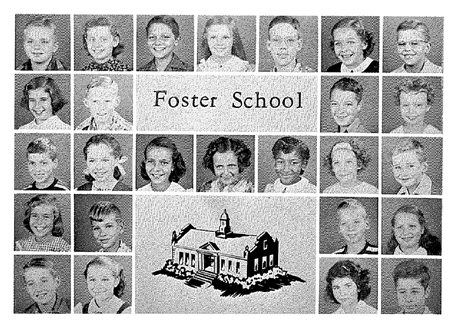 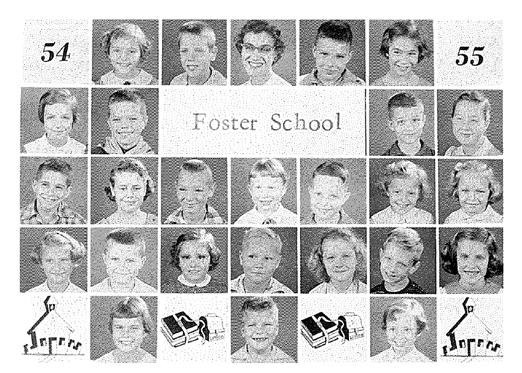 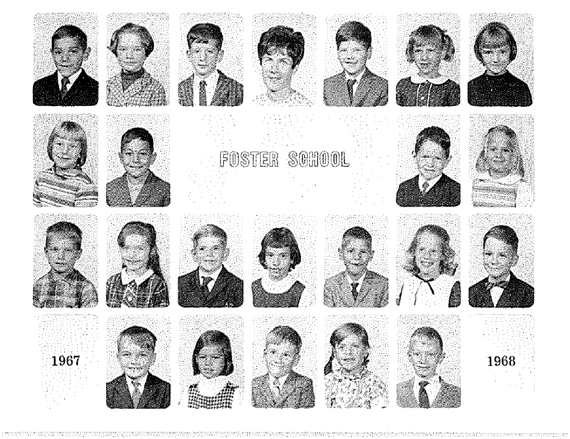 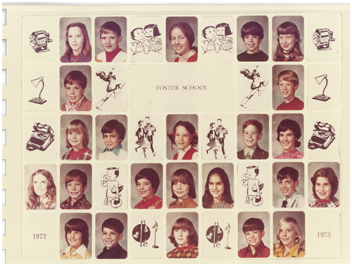 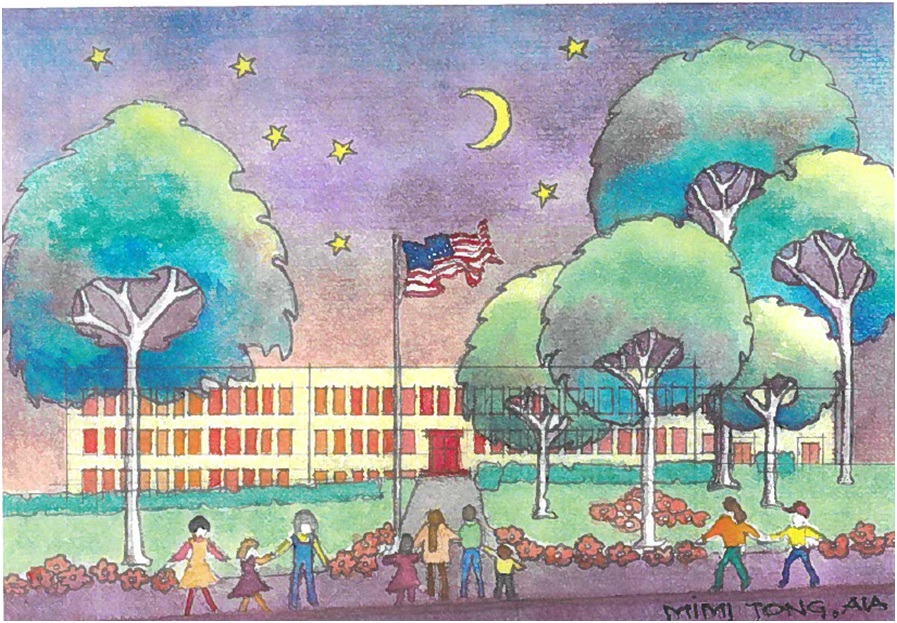 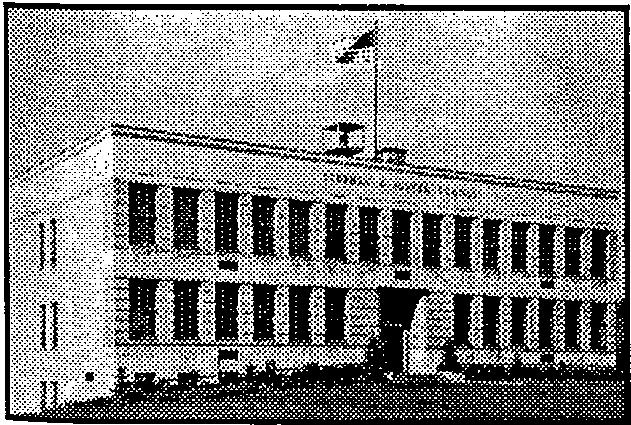 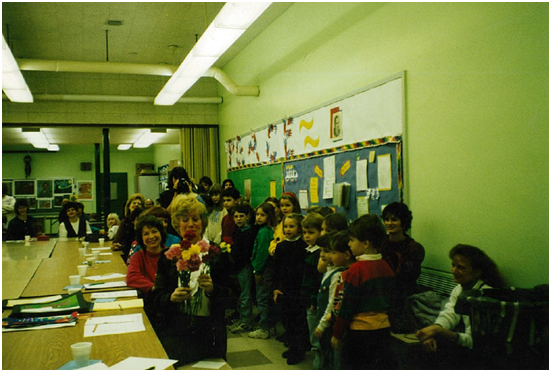 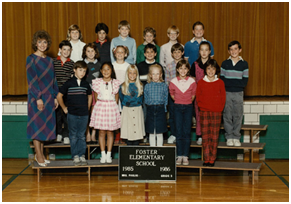 Like much of Mt. Lebanon, the Hoodridge area now defined by Foster School was mostly farmland before the Liberty Tubes opened in 1924, creating a building boom that attracted young families and created the tight-knit neighborhoods we now enjoy.  Beautiful, sprawling trees dominated the landscape. The row of old apple trees still standing across from Foster School today are remnants of the orchard on the former Lochinger Farm where the school was built, says Peggy Cary Smith, 90, now of Providence Point.

Peggy’s parents, Dorothy and Emmett Cary, built their home on Hoodridge Drive three doors from the intersection of Vermont Avenue, then a red dog road, in 1924.  They expected a neighborhood school to be built soon, and the school district did start to acquire land in 1929.l   But by the time Foster opened, Peggy was at Mt. Lebanon High School, where she met her husband, George Smith, in physics class.  George died in 2011.

Peggy says Mr. Lochinger was a truck farmer and drove a horse and cart through town selling the corn, potatoes and other produce he grew. She recalls that Mrs. Lochinger, whose maiden name was Bupp, would sit in a rocking chair under an immense oak tree and use a long, bent-handled wooded spoon to stir the applesauce and ketchup she made in a large kettle. The Lochinger farmhouse stood close to where the school now stands. Behind it was the outhouse and behind the outhouse was a spring.  “Father warned me never to drink out of that spring,” Peggy says.

Emmett Cary often hunted on the grounds where Foster would be built, bringing home rabbits or other small game for dinner. And Peggy rode her pony, “Patches” freely around the expanding neighborhood.

Things were more relaxed back then when it came to animal control.  “One night the phone rang, and Mother said it was the police calling for me,” Peggy says, laughing. “I answered, and the officer asked sternly, ‘Young lady, do you have a pony?’ When I said, ‘yes,’ he said, ‘Well you better go look for it because we found it roaming and tied it to a telephone pole.’”

When the first students arrived at Foster in 1941, there were only three teachers in the still-unfinished school, each teaching two grades, in contrast to today’s 51 faculty and staff. Though the school was named for native Pittsburgh composer Stephen Foster, it sometime was referred to as Mt. Lebanon’s “Country Day School,” a name that embodied the quiet neighborhood, removed from busier parts of town.  One of the things students from the ‘40s, ‘50s and 60s remember fondly is ice skating on the Foster tennis courts, which were flooded (probably with fire hoses—Markham and Howe also were flooded) and made available for free skating in the winter. This was, of course, long before residents demanded a flawless tennis surface or an ice rink was built at the recreation center in Mt. Lebanon Park.

With an emphasis on building community and forming lifelong friendships, the school played an integral role in the early students’ lives—and it continues to encourage strong bonds today.  In fact, “[Foster] still often seems like the extension of some residents’ backyards,” Ramsey says.

The school building has been expanded and renovated several times. Changes included adding a new gymnasium, almost doubling the office space and building a new playground. The most recent project in 2003, which took place as part of the renovation of all seven elementary schools, involved gutting the entire building and remodeling the interior to accommodate modern teaching and learning styles.

Over the years, Foster has maintained “an emphasis on forming good habits early in life as well as a healthy balance of academics and fun,” according to retired Foster principal Barbara Float.  The school’s motto, I will always be kind, courteous, and respectful, “may seem a bit oversimplified, says Hannah Brem, a 2016 Mt. Lebanon graduate and former Foster student who now attends Emerson College. “But, having graduated high school, that motto is still the most important thing I’ve ever learned.”

At the October 8 Open House, there will be shared laughs and memories as people of all ages with ties to Foster tour the building. Welcoming remarks start at 1 p.m. with the high school marching band and other special guests, and the school will be open for self-guided tours and refreshments.

A special event will be the opening of a time capsule prepared by students 25 years ago. Following that, memories [1] Foster alums have shared will be sealed in a new capsule to be opened on the school’s centennial in 2041.

It may be hard for today’s students to imagine that the papers slipped into the time capsule 25 years ago were hand-written—there were no computers, cell phones or any of today’s ubiquitous devices—let alone to picture student life in 1941 when Foster opened. Yet, today’s 275 Foster students have much in common with the generations that came before them.

“Foster kids are good kids,” says Brem. “We played grade-wide kickball games most days at lunch, stuck up for each other and overall had a strong community.”