At the Media Preview for the 2014 Pittsburgh Craft Beer Week, it was pretty easy to play “Brewer or Journalist?” Not as easy as “Firefighter or Journalist?,” played during a Keystone Press Awards celebration/firefighter’s convention one weekend, but still pretty easy.

Most of the brewers were long-haired, long-bearded and almost all of them wore T-shirts advertising their product.

This is the third annual celebration of craft beer in Pittsburgh, with more than 150 events on the schedule right now, and more to come. Events kick off with a Gateway Clipper Beer Cruise on Friday, April 25, and continue through Sunday, May 4–longer than a week but so far nobody has complained.

As of now, the only Mt. Lebanon event is at Brews Brothers on Mt. Lebanon Boulevard, the tapping of a firkin (Gaelic for “big thing of beer,” most likely) of Dulachan IPA, a specially dry hopped ale from Lavery Brewing in Erie, Thursday, May 1, from 7 to 10 p.m. 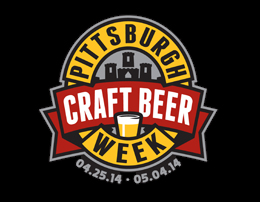 Lavery also partnered with East End Brewing to produced one of the 11 “collaboration” beers that will be featured throughout the week, a blending of complementary flavors between two brewers. The Lavery/East End production is called Rojo Ahumado, and is a smoked red ale with chilies. This beer pairs very well with the soft pretzels they were giving away at the media preview, and also with part of a jacket-pocket chocolate chip cookie from some wedding last month.

Another collaboration, between Export’s Rivertowne Brewing and the Roundabout Brewery in Lawrenceville, was still in the keg during the preview, but will be popping up all over town throughout the week. Dyana Sloan, co-founder of Roundabout with her husband, Steve, says of all of the places where they have brewed beer, including Florida, Hawaii, California, New Zealand (where Dyana’s from) and several other places, Pittsburgh has been the most welcoming craft brew community.

“By far the best brewing community I’ve ever seen,” she says. “Of course we’re competitive, everyone wants to make the best beer, but it’s not a cut-throat thing.”

Events are being added to the calendar all the time. To keep up, visit pittsburghcraftbeerweek.com/calendar/. You can search by venue, event type or neighborhood.