Not too long ago, a Pennsylvania Boulevard resident noticed a young family at the T stop near her house. Mom, dad, small baby in a stroller. They caught her eye because they stayed on the platform for several stops, as passengers got on and off. Concerned, the resident ventured out and began talking with them, mainly, she said, because of the baby.

It turned out the family was going through a rough patch. They had just had to move out of their apartment and had no place to go. So the Pennsylvania Boulevard resident made a call to what might not be the first place you think about—the Salvation Army.

The Salvation Army Pittsburgh Temple Worship and Service Center is located on McNeilly Road in Mt. Lebanon where the old Toner Institute used to be. Along with a food pantry, a fitness center and a basketball court, the Army has a full-time social worker on site. She was able to direct the young family to a shelter, where all three of them could stay together, and she was able to find them some additional help to get back on their feet.

“The first thing we are is a church—we’re not shy about that,” says Maj. Paul Moore, who along with his wife, Sherry, also a Salvation Army Major, directs the Pittsburgh Temple. “But from there, we do a lot of social services. If we can’t help, we’ll direct you to the help you need.” Most programs at the center are open to anyone, not just to church members.

It’s no coincidence that the Moores are married and happen to be in the Salvation Army. It’s one of the rules. Because the army is organized along military lines, with each position assigned a corresponding army rank, and frequent transfers from place to place, the army requires both halves of an active serving couple to be members.

“It’s funny,” says Sherry. “We thought New York was the melting pot until we came here. Here, we serve people who come from Iraq, Syria, Nepal, Uzbekistan. Not what we were expecting.”

“This is a really easy place to minister,” says Paul. “Pittsburgh is really rich with people who love each other.”

In addition to Sunday services (complete with a brass band—they never had one of those at St. John the Baptist), the Salvation Army’s programs include a children’s singing company, an open dinner for children on Tuesday evenings, men’s basketball and a variety of programs for men, women and teens.

[2]Gary Brown, Crestvue Manor Drive, serves on the Salvation Army’s National Advisory Board. Although his family has been involved with the army all of Brown’s life, it wasn’t until the aftermath of the 9/11 tragedy that he began volunteering a lot of his time. He believes their humility is a double-edged sword.

“The fact that they’re so humble is their greatest strength, but also their greatest weakness,” he says. “Last year they helped 30 million people in the U.S. alone, but you ask most people what they do, they’ll say ‘ring bells at Christmas and serve coffee at fires.’”

The Moores hope to start an after-school tutoring program and are looking for people who can tutor in English and math from grades 1 to 12. The center also needs volunteers for its Tuesday night programs, which commonly sees between 25 and 35 children each week. And they need food to stock its food pantry, especially in the summer. 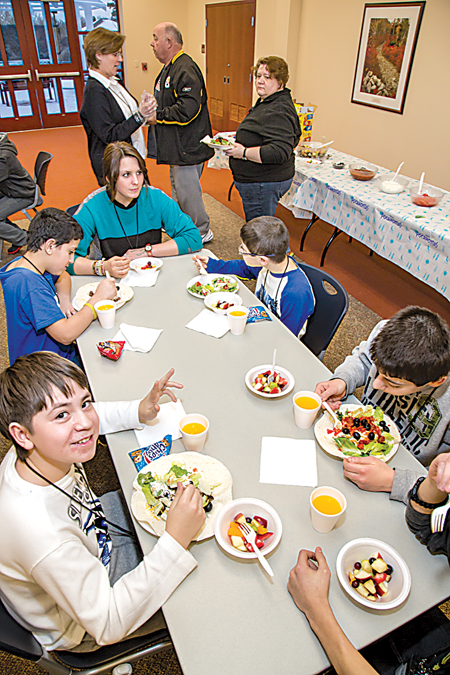 [3]“We get a lot of donations of everything around the holidays, but it tends to taper off as the year goes on,” says Paul.

Among summertime needs are backpacks and school supplies for the temple’s new Back to School program. Last summer, the first year of the program, the temple helped 125 families with donation of backpacks, clothes and shoes. They even got a barber to come on site and give free haircuts.

“That was a pretty successful program, one we’d like to expand next year,” says Paul.

If you have any spare food, clothing, shoes, coats in the wintertime for Project Bundle Up, you can drop them at 1060 McNeilly Road, or if you would like to volunteer, stop in or call 412-207-2127.