Mt. Lebanon’s Public Information Office (PIO) has conducted surveys periodically over the years, to provide insight into how well our office is serving residents’ communication needs. Our last survey was more than two years ago.

A recent survey conducted online in March and April 2013 is a testimony to how quickly communications—and in particular Mt. Lebanon communications—have changed.  For many years, we offered a print magazine 10 times a year. That magazine remains our “flagship,” but today we also have a  municipal website, www.mtlebanon.org; an online magazine, www.lebomag.com, a Facebook page, www.facebook.com/mtlebanonmagazine, a Twitter feed, twitter.com/mtlmagazine; LeboALERTS, leboalert.mtlebanon.org and an mtl-TV/YouTube video channel www.youtube.com/mtlebanonpio. 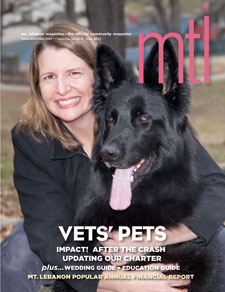 We are no longer mtl magazine, but mtl media—a significant change in that the various PIO media share the same goals but use different means of communicating the messages, thus reinforcing the other media and also delivering information to residents in the ways they choose to receive it.

Our survey, which 234 people completed, is not statistically valid, as the people who took it self-selected—they could be people who really like or really don’t like our communications, as opposed to a random sample. Still, their responses give us a sense of how the community feels about the information we make available and how people have responded as our communication tools have changed.

Perhaps the best news for us is that despite our new media, a huge number of respondents—66 percent—said they preferred to read the magazine in hard copy and 19 percent said they would prefer to read the magazine both in print and on a device, the second most popular choice. The support of 85 percent of respondents for the print edition is significant because magazines in general—including national brands published by houses like Conde Nast and Hearst—continue to survive as the result of strong print advertising bases, getting only 2-3 percent of their revenue from online advertising. Presenters at the recent national MediaNext magazine conference in New York indicated that publishers expect online revenue to grow slowly, perhaps only to 10 percent of total revenue over the next three or four years.

Readers currently can view mtl on their Smartphones or iPads. In 2014, we hope to roll out an app for a tablet version that will make reading the magazine online more user-friendly.

Other good news? At least two people read the magazine in the majority of households and 83 percent of respondents said they read the magazine “always” or “regularly,” with fewer than 4 percent indicating they never read the magazine. Nearly half the respondents spend up to one hour reading the magazine, with 31 percent spending less than half an hour and 22 percent spending more than one hour. Time spent reading the magazine is down slightly from our last survey; however, the magazine is smaller than it once was (due to a combination of factors, including that fact that time-sensitive or additional information can now go online), so it obviously should not take as long to read.
Interestingly, 35 percent of readers keep the print magazine around for several months; 35 percent keep it for a week or less, and 30 percent keep it until the next issues arrives. In past surveys, more people said they kept the magazine for up to three months for reference; however, today many readers know they can review current and archived back issues at www.lebomag.com.

Survey results indicate that the print magazine is achieving our goal of sending people to other municipal media for information, reinforcing important information wherever they land. In addition to reading the print edition, 80 percent of respondents said they had visited the municipal website, 58 percent signed up for LeboALERT, 37 percent visited mtl online and 35 percent visited mtl’s Facebook page. Twitter was our least popular communications option, with only seven percent saying they used it. And only 11 percent had watched mtl-TV/YouTube videos, a number we’d like to see grow. Still, considering that about 82 percent of respondents were between 40 and 60-plus and only 2.6 percent were in their 20s—reflective of the Pittsburgh area’s older demographics—this result is not surprising. We definitely will be working to draw more people to our complementary digital media in the coming year.

Information gleaned about the sort of content people prefer helps us gauge coverage.  On a scale of 1 to 5 with 1 being the best, none of our content earned less than a 3 (which went to health and fitness—are we all couch potatoes?). The things people like to read about best, in order of priority, are: community events, history, public safety, residents’ accomplishments, house and garden, cooking and dining, people profiles, education, arts and entertainment, environment and humor.  Only slightly less popular were local government issues and commercial districts, a bit surprising in that these traditionally have been among people’s top picks.

Eighty-four percent of respondents rated the content and design of the print magazine as excellent or good. The majority of the folks who had visited www.lebomag.com rated the online magazine as excellent or good, but only slightly less than half the respondents said they visited the site regularly, and 59, 89 and 76 percent of respondents, respectively, said they had never visited our Facebook page, Twitter Feed or mtl-TV/YouTube channel and could not rate them. (On the plus side, 35 percent visited Facebook at least occasionally with eight percent visiting daily.) Considering Mt. Lebanon’s demographics, we would not have expected the majority of respondents to use the new media regularly; still the results indicate that we have work to do in familiarizing residents with our online resources.

One question asked if people had taken any actions as the result of accessing any mtl media. Responses confirm that our municipal communications program is a community asset. Sixty-one percent of respondents had attended a special event uptown; nearly 54 percent had visited www.mtlebanon.org for more information and 53 percent had discussed a community issue with a neighbor. Other actions people took included signing up for a recreation program (41 percent), attending an event /program at the library (37 percent), passing along a copy of the magazine or sending a link to someone (35.5 percent), contacting a municipal department (34 percent), contacting a commissioner (18 percent) or stopping at the service center in the municipal building (18 percent).

Our advertisers should be pleased to know that their ads are working. Seventy-one percent of respondents said they had made a retail purchase as the result of seeing an ad, and 40 percent had visited an advertiser’s website. Also as the result of seeing ads, people had tried a new restaurant (57 percent), attended a cultural event (41 percent), made a home improvement (22 percent) or consulted an architect or contractor (16 percent). They also called an advertiser listed in the classified section (17 percent), contacted a real estate company (10 percent), made an appointment with a health care professional (10 percent) and considered retirement living options (8 percent).

So who answered our survey?  Ninety-two percent were from Mt. Lebanon and everyone was from the Pittsburgh area. All were at least 21 years old, and nearly 40 percent were between 30 and 49, a target market for advertisers. Ninety-five percent owned their own homes.  Average household income ranged from under $25,000 to over $200,000, with the largest segments being from $100,000 to $124,999 (21 percent) and $200,000 and up (19 percent). Respondents said they try to maintain a healthy lifestyle (80 percent), are well informed about local, national and international issues (75 percent), are technologically savvy (56 percent), frequently donate to nonprofits (56 percent) and are active volunteers (47 percent).  One third say they are looking for fun things to do in the Pittsburgh region and are interested in continuing education opportunities.

Eighty seven percent said they dine out locally at least twice a month and 83 percent have tried a new restaurant in the past year. Seventy percent attended a cultural event in downtown Pittsburgh and 58 percent attended a professional Pittsburgh sports event. Forty-six percent visited a new health care professional; 42 percent made a major home improvement and 41 percent worked out regularly at a health club or studio. Other things readers pursued include consulting a financial professional (34 percent), purchasing a new car (30 percent) and enrolling themselves or a family member in a new school or enrichment program (24 percent). Twenty-three percent have moved or are actively considering moving to a new residence.

Thanks to everyone who took time to complete our survey. We value your opinions and will take your responses into consideration as we plan the content of our various media and look for support from our valued advertisers in the coming year. We are very pleased with the results. 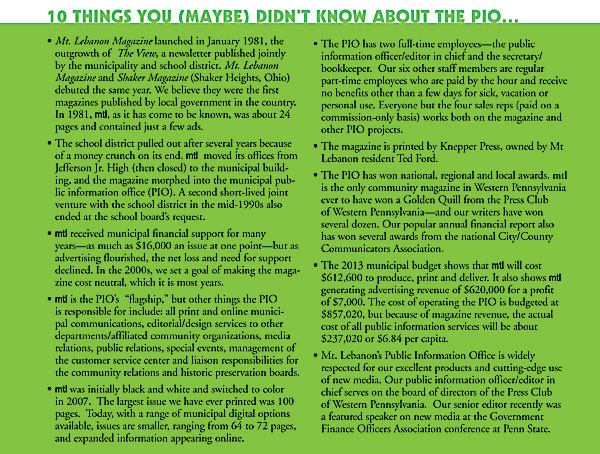