Suzan and Gary Schultz, Outlook Drive, have been hosting an annual food drive at their home in support of the Greater Pittsburgh Community Food Bank (GPCFB) since 2011. This year, on Sunday, June 10, they raised $9,095 and collected 978 pounds of food. Over the course of eight years, they have raised a total of more than $27,000 and brought in 6,100 pounds of food for the food bank.

So what does it take to organize a successful community food drive? Suzan Schultz answers your questions in an interview below.

Why did you start a food drive?

It was twofold—I had the idea after reading an article in the PG about the staggering amount of communities that are food-insecure right here in Western Pennsylvania. Also, I was new to Mt. Lebanon, so I thought it would be a great way to meet my neighbors.

Is it difficult to organize? What steps did you have to take to set it up?

Having a food drive is not difficult, but you have to be willing to put yourself out there, and you can’t worry about rejection. You just have to fill out a form with Greater Pittsburgh Community Food Bank … They have kits on their website to help you, which includes their official logo for you to use in advertising.

Due to my work schedule, I keep mine simple—one day, four hours. I make homemade cookies and set up a little concession area that my young neighbor, Ava Pesacreta, has helped me with the last five or six drives. She adds life to the day and has a little cash kitty to allow people to donate for the cookies and drinks. I also place signs in our immediate neighborhood on the day of the drive that children on our street have made. I tie balloons to help them stand out, and that helps remind people of the food drive. We get a few new contributors each year because they see the signs and stop over.

It has been an awesome way to meet new people. There have been a couple times that it has rained, and we still sat in the driveway under the tent, but traffic was slow. However the last few years the weather cooperated … This year, the weather was perfect for the four hours of our food drive before the storms moved in, so the neighbors came out. They visit with other neighbors and other people I’ve solicited outside our neighborhood, and it’s always a nice small community day. Probably the most rewarding part for me is seeing the children push their wagons down the street with donations!

What have you learned from organizing your food drive?

I have learned so much by being involved with the GPCFB. I think most people perceive that the people who rely on the food bank are either unemployed, single parents with no drive, etc. But that could not be further from the truth. The truth is many of the families they support have parents that have two (or even three) jobs to make ends meet, and they are still having a hard time paying bills and feeding their families.

What has the response been like from the community?

Most of the community members who know about it support it … My biggest drawback in growing this yearly food drive is lack of time on my part, but I hope to change that someday, because I don’t plan on ever stopping making people aware of hunger. Raising money for the food-insecure is something I’m very passionate about. I personally need to make more of an effort to try to engage people to help me grow this food drive.

I find the best way to get donations is to personally ask people to contribute. It’s easy to ignore a Facebook post. Lately, I’ve been working on getting more tax-deductible monetary donations instead of food items, mostly because through GPCFB wholesale purchase program, they can purchase $5 worth of groceries for every $1 donated. But also, loading items into my truck and delivering them to their facility is back-breaking work! In the past, when I had more than 900 pounds of items, and they told me that was one of the biggest one-day drives they ever had. So each year I’m encouraging monetary donations—none is too small. Of course, none are too big either! But that being said, we accept all donations that are non-perishables and not used.

How has your food drive grown over the years? 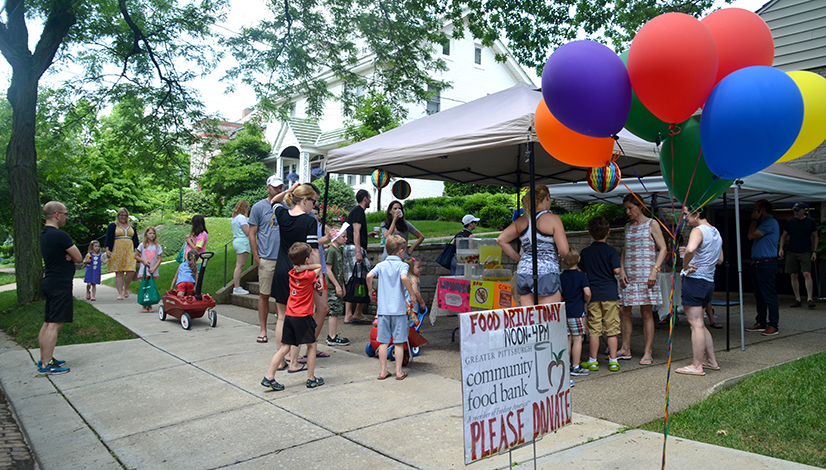 For my first drive, I contacted only the people that lived on my street, because I had their emails from our neighborhood email list, and the few people I knew in Mt. Lebanon at the time. That was December, 2011, and I collected $400 and 543 pounds of food. I decided to continue with the annual drive, but moved it to June. I learned that summers are particularly difficult for GPCFB to keep up with the needs of families, because children are not in school. Sadly, school lunches are often the only meal some children get. That breaks my heart. Last year, our food drive collected $4,935 and 765 pounds of food, and this year, it collected $9,095 and 978 pounds! To date, we have donated more than $27,000 and 6100 pounds of food total. I’m proud of the efforts people have made to continue this annual grass roots event.

What would you say to someone who is considering organizing a food drive?

DO IT!!! Call me and I will help you plan! Let’s show our surrounding communities how wonderful Mt. Lebanon is, and how we care about helping those who are less fortunate. GPCFB serves over 120,000 people a MONTH! They need all the help they can get.