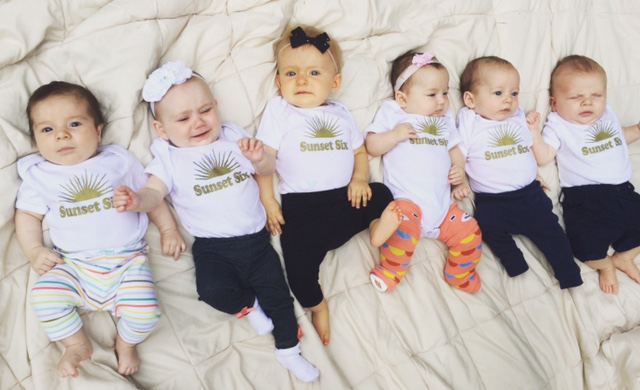 “Move down to Sleepy Hollow when you are ready for babies,” says Jena Pattison with a laugh. “There are babies everywhere and more coming.”

She’s not joking. In fact, on her section of Sleepy Hollow Road in Sunset Hills, six babies were born to five sets of parents within approximately six months of each other, from January to July 2016.

And it doesn’t take much imagination to guess the nickname that the parents have chosen for this beautiful band of babies.

We could say “there must be something in the water.” Or we could think back nine months from the babies’ birthdays, roughly April to October 2015, and wonder if there was anything *ahem* “special” going on at the time…

It was a delightful, unseasonably warm, Pittsburgh summer. The Pirates AND the Penguins made it to the Playoffs. OMI’s reggae-inspired song “Cheerleader” made it to the top of the charts. Pope Francis visited Pennsylvania (you may find this suggestion odd, but there actually was a documented baby boom nine months after Pope John Paul II visited Ireland in 1979. John Paul was the number one name in Ireland that year).

The most likely explanation for the Sunset Six is that Sunset Hills is a notoriously family-friendly neighborhood. Actually, I suspect after we publish this story, we will hear about many other instances of multiple births in a short period of time in close proximity to each other in Sunset Hills.

“It’s just such an awesome neighborhood. It’s so Leave it to Beaver,” says Sara Addler, a Sunset Six momma. “We help each other out. We watch each other’s kids. … The older kids in the neighborhood want to watch the younger kids and hang out with them. … Sometimes, we even get together and bring our baby monitors and everyone has wine. It’s just an awesome, close-knit group of people.” 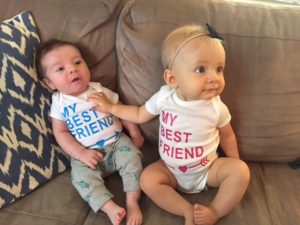 Sara chose Sunset Hills so that she could be close to her best friend, Jena. Friends since kindergarten, they went to high school together in Springdale and later lived in the midwest at the same time—they lived in different states, but they still figured out how to have frequent girls’ nights. Then, when the Pattisons moved to Mt. Lebanon six years ago, the Addlers followed four years later.

Now they live on the same street, and they both have a three-year-old and a one-year-old, all of whom are obviously destined to also be best friends forever. “Everyone says it to their best friend when they are younger—‘We are going to raise our kids together someday’—and here we are,” says Sara with a shrug.

However, Sara and Jena’s lifelong friendship, and the fact that all of them live on the same street in Sunset Hills, is not the only tie among the Sunset Six parents. Sara is an HR director at the same company as Tom Flavin, the father of the Sunset Six twins. His wife, Ashley, had the same doula as Sara and Jena, all of whom were pregnant around the same time during both of their pregnancies. Patty, Betsy and Sara were all delivered by doctors at the same practice at West Penn Hospital. Oh, and Ashley and Sara were actually due on the same day during their second pregnancies, but the Sunset Six twins came early.

Confused yet? I certainly am. But enough about the parents! Meet the adorable subjects of this story, who will someday take up approximately one-fourth of a kindergarten class at Howe School.

Parent Occupation: Alex is a chiropractor and Jena is a supermom of 2 (soon to be 3, in August). They own City of Bridges Chiropractic in Brentwood.

About Remi: “Remi is a free spirit. She’s full of energy, loves doing anything her big brother does and is a sweet girl. … She’s the oldest of the [Sunset Six]. For her first birthday, we had a wild flower-themed party, since she is our wild flower!”

Why Lebo? “My husband is a Maximized Living Chiropractor. We opened our clinic in Brentwood six years ago. … I grew up in a small town, but it wasn’t the same feeling as Mt. Lebanon. [Mt. Lebanon’s] a real neighborhood, where neighbors help each other out. We are excited to have our kids grow up in this environment.”

Piece of Advice for New Parents: “I learned with my second that you kind of just have to go with the flow. With the first, you want to do everything on a schedule, and it never goes that way. With the second, you are much more laid back. I feel like I can be a little high-strung, so I definitely changed in a good way after having kids.”

Parent Occupation: Patti is a fifth-grade teacher. Brian is a fabricator.

About Kate: “She loves dogs, lambs and books. Her favorite color is red. She is always happy and friendly with a side of sass. She is silly and loves to laugh and giggle. … She ends up being the center of attention wherever she is, because she loves people. Kate is very active and is always moving, except when she is sleeping, which I am thankful that she is good at! Kate is also determined and strong-willed. Kate has been taking swim lessons since 6 months old and loves the water. She is fearless and will jump into the water from the edge (Mom usually shuts her eyes when she does this).”

Why Lebo?: “We have lived here for 10 years. We enjoy our friendly neighbors, the tree-lined streets, the community atmosphere and the architecture of the homes.”

Piece of Advice for New Parents: “Set a schedule and routine for feeding, playtime and sleeping, and stick to it. Make sure everyone involved knows it. This has worked great for us.”

Parent Occupation: Tom is a technical consultant and Ashley is an artist

About the Twins: “Theo is very giggly and easy-going, and loves to eat and play in the bath. Maya is very smiley and sweet, and loves to be held. They enjoy playing on the floor while they smile and chat with each other. … They are very happy little people and are both very infatuated by their older sister, Aubrey, who gets everyone laughing when she plays with them. With all three kids giggling, it is hard not to laugh along with them!”

Why Lebo?: “We love being close to our family and being a walkable distance to school, restaurants and parks. Everyone here is very friendly and neighborly.”

Piece of Advice for New Parents: “My advice for new parents would be to try to relax and have fun! They are tiny for such a short period of time, and most of the things we stress about don’t matter too much. Embrace and enjoy!”

What’s it like having twins?: “Having twins is both amazing and exhausting. Add a toddler to that and you push your patience level further than you knew it could go. My mom is a twin, and I always thought it would be so cool to have twins, though I never imagined it really happening. I really feel lucky and still stare at them in awe over my giant cup of coffee in the mornings. My hands are full, but so is my heart.”

About Landon: “Landon is a really happy laid back kid with an awesome belly laugh. He loves to play peek-a-boo, knock down towers built out of blocks, be read to, bounce in activity gym and play ball with dad. He thinks he’s a budding comedian with his antics and vocalizations. We are so glad summer is here so we can get out for our daily walks!”

Why Lebo?: “We chose Mt. Lebanon because of the closeness of the community. We loved the character and charm of the neighborhoods and Uptown. We like the accessibility to the city and that we could walk Uptown to grab a bite to eat or a coffee on the weekends.”

Piece of Advice for New Parents: “Take each day as it comes, and don’t worry if things don’t go as planned.”

Parent Occupation: Ross is a special education teacher and Sara is an HR director

About Jude: “Jude is such a sweet boy!  He has a pretty laid back personality, but is also very active. He is currently crawling/cruising everywhere and getting into everything! The boy also LOVES to eat! His favorite foods are eggs, raspberries and Cheerios. He would be the perfect baby if only he would start sleeping a little better ;). He loves to watch and play with his big brother Abram and play with his monster trucks when Abram is not around.”

Why Lebo?: “We wanted our kids to have a group of friends and grow up together. This was something we wanted for our family, and [Jena and I] being best friends was a huge aspect. It’s why we wanted to move back to this area.”

Piece of Advice for New Parents: “Have a sense of humor. Right now, we are getting literally zero sleep. … Divorces happen at 2 a.m., when you are screaming at each other because you are at wit’s end. Then you wake up and forget about it. … But you have to laugh at everything and have a lighthearted view and focus on the good things. There are lots of good moments.”