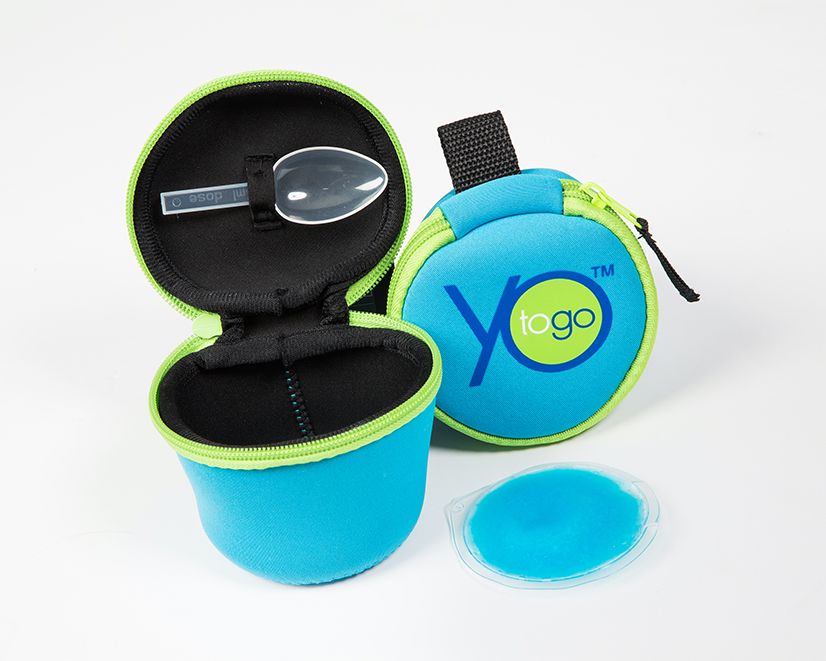 YOGURT! EVERYWHERE YOU GO!  What an awesome thing it is to be healthy and to have great habits, like eating fresh fruits and vegetables and easy protein sources like Greek yogurt. Only problem is, yogurt doesn’t travel well. Put it at the bottom of your purse, and the condensation will attract lint and paper clips like a magnet. Put it in your gym bag, and it’s just too close to your shoes and socks. Stray too far from the fridge, and it can get rank quickly.

Childhood friends Cyndi Tommasi and Jennifer Laitta Moore have solved that problem, with their YoToGo cups: portable neoprene containers with a small ice pack and miniature spoon that perfectly hold containers of Greek yogurt.  The cups keep the yogurt cold for a minimum of three hours and a loop helps it attach to a carabiner if you want to clip it to a stroller or bag. They come clean in the dishwasher or washing machine and the little spoons can be replaced.

The containers do echo the shape of Greek yogurt but because neoprene stretches, you can fit a Yoplait in there. You also can use it for hummus cups, fruit cups, ranch dressing, or any other small item you want to keep cool.  The container is collapsible and easily fits in a jacket pocket.

You can get  them  online at www.yotogo.net [1]or in the Strip District at In the Kitchen, in pink, blue and black, for $9.99 each.

Moore, who lives in Georgia but grew up on Park Entrance and Folkstone, came up with the idea and brought in Tommasi, who lives on Washington Road, with her husband, Gene. (The couple has two grown children, Liz and Nick.) Both YoToGo partners went to Westminster College and have backgrounds in sales. Tommasi has worked at General Mills and owned two businesses that she has since sold.

What will the pair do if yogurt containers change shape? No worry. They have several other products in development. Stay tuned and stay cool.

Stewart Putnam, Kingsberry Circle, has been named a BoardSource Certified Governance Trainer. Putnam, who just completed a two-year term as chair of the national board of the Alzheimer’s Association, is available to share his expertise in board structure, performance assessment, board-staff partnerships and other areas of governance with the boards of other nonprofit organizations. In addition to board development work, Putnam supports organizations in strategic repositioning, change management, leadership coaching and focus group facilitation. Prior to his service to the Alzheimer’s Association, Putnam was president and CEO of St. Mary’s Hospital in Rochester, New York, and president of Unity Health System’s Health Care Services Division, also in Rochester.

TALKING HISTORY The Historical Society of Mount Lebanon is sponsoring a series of history programs at Mt. Lebanon Public Library.

At 7 p.m., on Wednesday, January 11, join Ken Hohman, author of Paperboy Days:  Adventures of the Last Great American Paperboy, for a nostalgic trip to Mt. Lebanon in the 1970s and ’80s. Chronicling the highs and lows of delivering the Pittsburgh Post-Gazette for almost eight years,  Hohman’s high-spirited memoir and tribute to the vanishing trade of newspaper delivery earned praise from the Pittsburgh Post-Gazette and Pittsburgh City Paper. The evening includes a reading, book discussion and audience Q&A. Hohman also will be selling and signing copies of his book.

On Wednesday, February 15, also at 7, meet President Ulysses S. Grant (or at least a guy who’s spent years re-enacting him). Gettysburg resident Kenneth Serfass returns to Mt. Lebanon Library to present his living history talk about our 18TH president. Serfass, a retired U.S. marine and living history professional, has portrayed Grant for a History Channel documentary and is the bandmaster for the Antebellum Marine Band. Elected president in 1868 and re-elected in 1872, Grant stabilized the nation during the turbulent Reconstruction period, prosecuted the Ku Klux Klan, enforced civil and voting rights laws… and responded to charges of corruption in executive offices more than any other 19th century president.