On May 14, 1988, LuAnn McNickle left home around 11 p.m. with her then husband to pick up their daughter, Katrina, at the nearby Assembly of God Church in Radcliff, Kentucky. Katrina, 12, had joined friends for a daylong church bus trip to Kings Island Amusement Park about 20 miles northeast of Cincinnati.

She had saved her own money for the trip to the park, about two hours and 40 minutes north of her home in Hardin County near Fort Knox, Kentucky, where her father was stationed with the Army. Her parents were eager to hear all about the day.

The bus was late, but LuAnn didn’t worry—experience with three children told her it always was hard to round up a crowd of kids and keep on schedule. Both parents fell asleep in the car and jolted awake at about 1 a.m. to find themselves central characters in the worst drunken driving crash in American history.

Just before 11 p.m. that night on I-71 near Carrollton, Kentucky, a black Toyota pickup truck driven by a drunk driver travelling the wrong way on the highway had crashed into the former school bus carrying Katrina McNickle and 66 other passengers, including a driver and three chaperons. Twenty-seven people on board died; 34 were badly injured; only six escaped unscathed.

No one was killed on impact, but when the pickup hit the bus, the front door jammed and within seconds the bus burst into flames. The only exit was at the rear, where passersby and first responders worked frantically to pull people from the vehicle, as it quickly became engulfed in flames and smoke. The bus exploded before everyone could get out, trapping and killing 27 people, mostly children.

The story of the crash and the survivors’ stories are the subject of a documentary produced by award-winning filmmaker Jason “Epp” Epperson of Eppic Films that will premiere this month to commemorate the 25th anniversary of the crash. Titled Impact: After the Crash, the film’s webpage, www.theimpactmovie.com, says it will  “take viewers back to that fateful night—including a dramatic and powerful re-creation of the crash—and then explore how those who lost family and friends have over the years both suffered and recovered from their pain and losses.”

Katrina McNickle was one of the survivors.

Her parents did not know that, however, when they awakened, learned of the crash and rushed home to begin calling hospitals the injured had been transported to, looking for their daughter.

LuAnn, a retired education specialist for the army who tutors in South Hills Interfaith Ministries’ (SHIM) after-school program, has lived on McCully Street in Mt. Lebanon since 2000. She recalls feeling sick to her stomach that night in 1988, as her husband began dialing. Thankfully, the first hospital they called—Carroll County Memorial Hospital, the one closest to the crash site—located Katrina and put her on the phone. Her injured leg would require extensive rehab, but she was alive.

The McNickles started driving to the hospital, still not comprehending the extent of the tragedy, and en route came to the crash site. “I asked the police officer who was guarding the bus for directions to the hospital, and he gave me a look as if there was something he wanted to say but couldn’t,” says LuAnn. “I realized later that he did not know we knew our daughter was alive, and we did not know there were 27 bodies still on the bus.”

It was only when they saw their daughter at the hospital, covered with black soot and with melted plastic stuck to her lips, that they realized what a horrific thing had happened. “It was devastating,” LuAnn says. “I had such conflicting feelings. I was joyful that my daughter was alive, but I had to restrain it—other people’s children were missing.”

It could have been the other way around. One of the last to board the bus, Katrina had been sitting in the front seat. But when the bus stopped for gas, a girl who was feeling sick asked to trade seats so she could be near the door. Katrina was delighted to move father back, close to her best friend, Katrina Muller, whom she had met when their families were stationed in Germany prior to arriving at Fort Knox. Most who died were seated towards the front.

Among the 27 missing and later found dead were children of three of the four Fort Knox families the McNickles had known in Germany, including Shannon Fair. Her parents, Janey and Larry, later led the court battle that resulted in higher safety standards for school busses. They maintained that the poorly designed former school bus, purchased and regularly maintained by the church, was as responsible for the deaths as the drunk driver. Kentucky now has among the strictest school bus laws in the nation, requiring nine exits on each bus and regular inspections of pre-owned school busses.

At the hospital, Katrina’s main concern, LuAnn says, was for her best friend, who was so badly burned  “that she looked like a monster” and had been airlifted to Kosair Children’s Hospital in Louisville. Katrina refused to go home until her parents took her to see that the other Katrina was alive. When they arrived at the hospital, Katrina was in surgery, but her mother, Mickey, comforted the McNickles, a gesture of kindness LuAnn will never forget. Katrina Muller recovered, but needed skin grafts to her face, hands and right arm. The two Katrinas lost touch for some years, but recently have reconnected through Facebook, LuAnn says.

Although the days and weeks following the crash are blurry, LuAnn remembers attending heartbreaking funerals and memorial services and is thankful for the family counseling services provided by Fort Knox’s Ireland Army Hospital and the weekly art therapy and group meetings for survivors offered to students at Hardin County’s James T. Alton Middle School. “The whole community pulled together,” she says.

She also is thankful that Carroll County, where the crash occurred, recently had conducted an emergency management drill that uncannily involved a similar type incident.  “People think drills aren’t important,” she says, “but all 40 of the people who were pulled off that bus survived.”

Families dealt with the trauma in their own ways, LuAnn says. Some chose to move far away as soon as the lawsuits settled. LuAnn, like Janey Fair and many others, became active in Mothers Against Drunk Driving (MADD), advocating for stiffer penalties for drunk driving and serving as victims’ advocates. Janey Fair, who died in 2008, remained one of LuAnn’s close friends.

The experience changed Katrina almost immediately, LuAnn says. Katrina went back to school and worked hard through gymnastics to rehabilitate her injured leg but curiously cut off her ponytails and adopted a new look—“it was almost as if the crash had made her an adult,” her mother remembers. Shortly after the crash Katrina announced that what she really wanted in life was to be a mother. 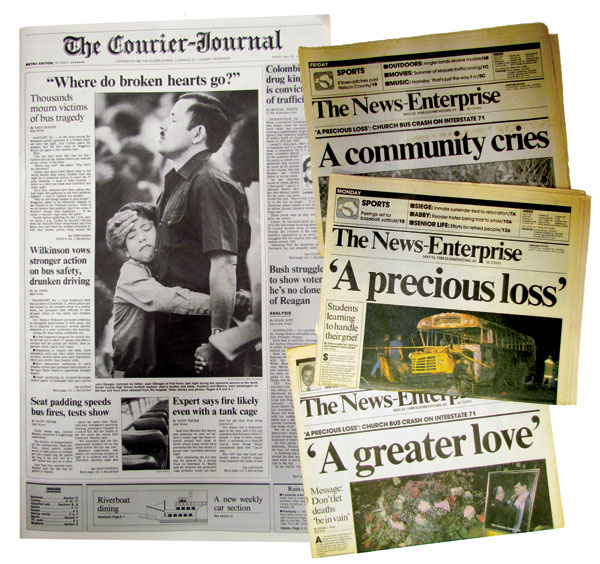 There were hard times to come—“I remember Katrina coming home from school sobbing because a girl said, ‘You should have died, not my friend,” LuAnn says. Katrina experienced night terrors.  She married at 16 and had a baby soon afterwards. “I might not live to be 18,” she explained.

When she married, Katrina promised she would get an education, and she did. She now works as a registered nurse in the intensive care unit at University Hospital in Louisville, is happily married to her second husband and has four children and a new grandchild. She has moved on, but has not forgotten, says her mother: “Now her nightmares are about her children.”

There are many references to Katrina in Kunen’s book, and she and LuAnn have spoken and written for MADD. Katrina appeared in People magazine and on the Today show with other survivors in 1998, the 10th anniversary of the crash. Since moving away 13 years ago, however, LuAnn has lost touch with many of the people who shared the experience.

“I am hoping when the movie comes out, I can learn more, “she says of the documentary, which focuses on crash survivor Harold Dennis, who went on to become a University of Kentucky football star, but “also will reveal numerous other personal stories of loss and historic rejuvenation, of fear, love, struggle and hope.”

LuAnn and Katrina were not interviewed for the upcoming documentary, so it makes sense to ask LuAnn the same question some survivors will answer on the big screen.  How did you get through it?

“With something like this, some people’s faith grows stronger; others, it tears them away,” LuAnn says. “My faith played a big part in my life.  Tragedy grew it.”

LuAnn and Katrina will join others who  shared the life-altering experience, when they attend the private preview of “Impact: After the Crash” at the Historic State Theatre in Elizabethtown, Ky., on May 14, the 25th anniversary of the crash.  A public premiere will follow on May 15 at Hardin County Schools Performing Arts Center. Director “Epp” Epperson says the  film will then go on the festival circuit and is likely to end up as a television documentary. DVDs will be available. For updates, visit www.theimpactmovie.com or www.facebook.com/impactmovie.