For 10 days in the summer the Kearns household feels like backstage at Radio City Music Hall—15 to 20 singers, dancers and actors nervously rehearsing for a big moment in the spotlight while costumes are furiously stitched and scenery painted. But for this special theater troupe, called Six on Stage, all the participants are in elementary school and the production is entirely kid-run. Sisters Molly and Grace Kearns were part of a child-led theater group when they lived in New Jersey and brought the idea to their Lynn Haven Drive home when their family moved here in 2008. The first production, 2009’s tribute to the Wizard of Oz, included just a few friends as well as the two sisters. It’s “a great tradition to do with Grace,” says Molly.

Molly, a sophomore at Mt. Lebanon High School, is the director, choreographer, and music coordinator and Grace, a fourth-grader at Markham, is an actress; the sisters are planning their fifth annual production for August. This year, they’ve picked “Seussical” with two weeks of performances planned for before school starts.

With such complex past performances as “Alice in Wonderland,” “Annie,” and “The Little Mermaid,” the sisters begin the process of coming up with ideas, music and dance moves a year in advance, until summer rolls around when it becomes more of a group effort.

They have a creative and imaginative crew, making their own scenery, drawing backdrops on canvases and turning household items into props and costumes. Scripts are gleaned online but the girls spend much time editing them, supplementing them with sheet music and then pre-recording the piano so they can sing along to it. 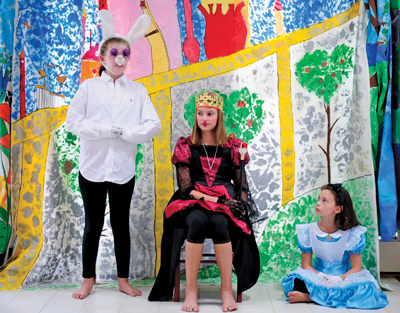 The lower level of the Kearns’ home is transformed into a night at the theater. A windowed and tiled room is their stage, with an adjacent family room serving as the seating section for the audience of family, friends, neighbors and teachers.

Each family who participates in the production contributes $20 toward supplies and costumes to produce a quality show.

“Instead of selling tickets for admission, the girls ask each audience member to bring an item to donate to An Angels Place in Brookline,” says Michelle Kearns, Molly and Grace’s mom. The girls are looking for sponsors in the hopes of being able to hold it in a larger space. “At some point they would love to expand and find a larger venue so they can include more friends,” says Michelle Kearns.

For information on how to get involved in the production and performance dates when they’re announced go to www.facebook.com/SixOnStage.