A lucky few get to see their work change lives for the better. And seeing it firsthand like Josh Caputo, who develops prosthetic limb technology, makes him feel he has a satisfying job.

“The best days for me are when I have a new patient come into the lab and wear our robotic device,” Caputo says. “To just see how life changing that is for them is awesome. They always ask to take it home.”

When he was choosing a college, Caputo was inclined to leave Pittsburgh because he wanted to become independent. But he changed his mind after touring a CMU robotics facility. It was then that he decided that he wanted to pursue a career in robotic engineering.

“It was so moving to see the robots, the real physical thing, and touch them and look at them,” he says.

At CMU, Caputo worked on a project that focused on the development of prosthetic limb emulators. Professor Steve Collins, who oversees the program, says Josh was a leader within the lab group.

“Josh is a very smart and hardworking person,” Collins says. “And he’s been very productive as a Ph.D. student. And he’s worked on the most important project of the group we’ve done.” 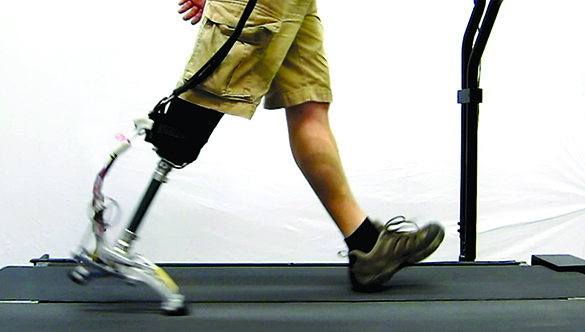 Caputo started Human Motion Technologies in May 2015. He and robotic engineer Rob Curran, another CMU alum, build the technology in the basement at his home in Morningside.

Curran is thrilled with the opportunity to work for a startup with such potential.

“I think it’s pretty cool, especially that we’re building things that will let people run faster than before,” Curran says. “In terms of the system we have, it’s pretty simple. But it takes a complex analysis. It’s a fun challenge.”

The technology is in an early stage. Right now, the devices they’ve developed are powered by off-board motors, which mean the motor sits on a table that connects to a prosthesis being used on a treadmill. Right now, his primary market is universities that use the technology to further their research into prosthetics.

Caputo is proud to own a company that can help transform so many lives for the better.

“Patients see the potential that it will eventually turn into a device they can wear in their daily life,” Caputo says. “They walk on it and feel they can walk better. Giving people that glimpse into the future is exciting. There’s really no other device that can do that.”