When Ada Mae Grashow was four years old, her dad kissed her goodbye before he left for work, as he did every morning. But this time was different.

On that day three years ago, Ada uttered a single syllable that made her parents cry.

It’s a simple word for many 4-year-olds. Ada, now 7, wasn’t most 4-year-olds. That year, Ada was diagnosed with Phelan-McDermid Syndrome, a genetic condition that affects learning and memory processes. The disease caused a regression in Ada, an “unlearning” of basic tasks. She works hard to turn the page of a magazine, or open doors on her own or tell her mom and dad how she’s feeling.

But Ada endures, often with a smile that continues to amaze her parents, Jon and Katie Grashow of Indiana Township. Before the regression, Ada “was the happiest person I ever met,” says Katie, formerly  Katie Beardsley of Rockwood Avenue in Mt. Lebanon, where her mother, Eileen, still lives. Once Ada was diagnosed, Katie adds.  “I would ask myself ‘how are you even functioning?’”

Ada has short brown hair that curls this way and that, and large silver-blue eyes. She lost her speech, but her eyes communicate when she’s happy, sad, overwhelmed or delighted. Through those two blue portals, Grashow catches glimpses of the world her daughter lives in.

“Ada’s world is very delicate, very fragile,” Grashow says. “It feels magical because when you’re living in that world you truly embrace it and the tiniest things can be the most lovely.”

Once, Ada knew about 150 words and five motions in sign language. She liked to make jewelry, paint and build towers out of Legos and blocks that would amaze the other children at her preschool. Then in a few months, those skills vanished.  “When she lost everything she was depressed because she was so aware of the things she couldn’t do, so she was scared to try things,” Katie says.

Katie and Jon were baffled by Ada’s struggles. When Ada was diagnosed, they could begin to understand what she was going through. “I felt like I didn’t know how to talk to other people about it. Jon and I felt kind of crazy, isolated, like we were floating in outer space and then we landed on this planet, but we didn’t know what it was called and we didn’t know the language,” Grashow says. “But the more we let Ada teach us, the more we can bring our two worlds together. We said ‘okay, let’s dive into this world.’”

Last October, the Grashows invited the community into Ada’s world through the World of Mae 5K Run and Walk. Last year’s event raised $12,000. This year, World of Mae on October 10 at Hartwood Acres will include a run and walk that’s wheelchair accessible, face painting, hula hoopers dressed as fairies and magicians.

Ada has slowly regained some abilities.  Music therapy classes and horseback therapy help her express herself. She learned how to ride an adaptive bike. World of Mae funds will go toward things like a new fence to keep Ada in the yard as she continues to regain her abilities to walk and run, and Ada’s therapy sessions. “We don’t know what tomorrow may bring,” Katie says. “We don’t know if she will ever talk again. If she ever says momma someday, that would be icing on the cake. But seeing her flourish and shine again and that brightness in her eyes and really feeling connected to her, that’s what matters.” 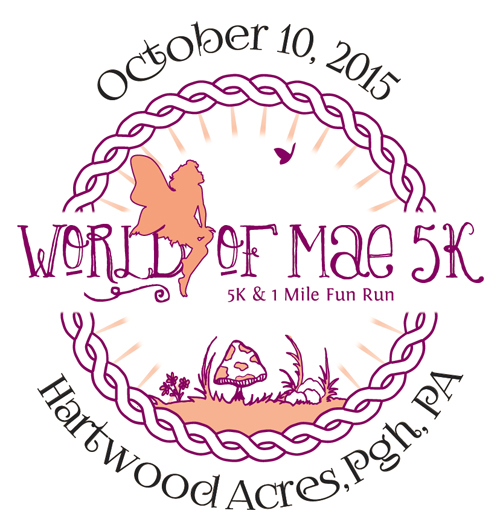 [2]The Grashows don’t have a monetary goal for this year’s event. They hope one day to use the funds from World of Mae to open a center for people with special needs to come with their families. Just like the World of Mae, Grashow wants the center to be a space for everyone to feel happy and fulfilled.

“So many times we celebrate accomplishments with… parties. But what about a kid who will never have a graduation party? What about the accomplishment of just sharing happiness or making someone else happy? That’s what we want to do. We want to create a place where happiness and peacefulness and empowerment are celebrated.”

Register for World of Mae 5K at www.runsignup.com/Race/PA/Pittsburgh/worldofmae [3]