Noises in the attic? Half-eaten tomatoes on the vine? Beady little eyes staring out from underneath the shed? In the South Hills, we have a crew for that.

South Hills Cooperative Animal Control (SHCAC) employs five full-time officers, all certified by the National Animal Care and Control Association. They have the authority to write citations, file animal bite reports, quarantine animals who are at risk for having rabies and euthanize animals. The officers are Mt. Lebanon Police Department employees, with an office in the Public Safety Center and a kennel at the Upper St. Clair Municipal Building.

If you have an animal issue, call 911 or the non-emergency number, 412-279-6911. The same call-takers answer both lines and take messages after normal business hours, which are 7 a.m. to 9 p.m. weekdays and 7 to 5 on weekends. If your after-hours call is urgent, dispatchers will send police.

“I’m always impressed by their work,” he says. “Police officers in all of the SHCAC communities have come to rely on Animal Control to handle most types of animal complaints, which allows officers to spend more time on enforcement and other crime-related issues.”

While there is no such thing as a typical day, animal control officers have a pretty good idea of what kind of calls they will be getting based on the time of year.

In the summer the calls for bats in houses spike. In the fall, the deer rut wreaks some havoc. In the winter, animals are looking for a warm place—like your house—to wait for spring, when they have their babies.

“Any wild animal you touch needs to be tested for rabies.”

Officers will try to get the animals out of your house if they’re in living areas, but they can’t go into attics or up on a ladder. A wild animal call will most likely result in setting some kind of a trap, such as a box trap. Animal Control will lend you the trap, which comes with instructions, and ask you to call them if you catch anything. Last year, residents set 152 box traps and caught 147 animals.

One animal that SHCAC can’t touch is a skunk. Skunk spray can permeate the inside of a truck and put the vehicle out of commission. Animal Control will refer you to a private wildlife removal service for that.

On the day we spoke, Officer David Lehman had just returned from a call—a dog owner whose dog ran into a raccoon in the backyard. That call that could have been prevented if the owner had simply checked the yard before letting the dog out.

It’s a popular misconception that any daytime raccoon sightings mean the animal is rabid. While raccoons are primarily nocturnal, it’s normal for them to be active during the day as well. Signs of rabies include staggering or moving erratically; appearing to be oblivious to noise or movement in its surroundings; runny eyes and matted hair; and any other strange or threatening behavior. Call Animal Control if you suspect that’s the case.

In 2018, the Allegheny County Health Department confirmed rabies cases in 25 animals: 12 raccoons, nine bats, two cats, one fox and one groundhog. So far this year, the rabies count is at seven, including one raccoon found in Upper St. Clair. The officers do not routinely test animals for rabies.

“It’s specific to the situation,” Lehman says. “Any wild animal you touch needs to be tested for rabies.”

Although this may seem to go without saying, Animal Control knows that it needs to be said: Don’t touch any wild animals, alive or dead. Just don’t.

There are a few things, in addition to checking your yard before letting pets out, that you can do to avoid a wild animal invasion. The main thing: Keep food off the ground.

“I’d say about 75 percent of our wild animal incidents are food-related,” says Capozzoli.

If you have inside-outside pets, only feed them inside. Food bowls on the patio are bound to attract animals. If you have bird feeders, be sure to clean up any food that spills onto the ground. Even pet waste can be a food source. And please don’t feed the deer. Mt. Lebanon has an ordinance against it. Bringing more deer into your yard increases the chance of disease transmission, and decreases the deer’s healthy fear of humans.

The ground underneath sheds, decks and other structures are prime spots for burrowing animals. Rats can nest in brush and compost piles, and can burrow into wood piles that are on the ground. Storing wood in a box or other container off the ground prevents animals from taking shelter there.

Rats can enter your house through holes in wood, brick, pipe—even the venting for your dryer. Once inside, they’ll roam around, chew through wood cabinets and help themselves to food in cardboard containers. Store grain products in glass or metal containers.

Animal Control has a homegrown recipe for ridding yourself of unwanted occupants living under the deck or in the attic: Mix a cup of ground cayenne pepper with three to five whole habanero peppers in water and spray it around the entrance. Be careful using this inside, because it could have the same effect on you as it does on the animal. Reapply after a rainstorm.

Just seeing a wild animal is not necessarily cause for alarm. Unless the animal is a nuisance, damaging property or putting pets or people at risk, the advice is: Coexist. But even if there is nothing Animal Control can do, it’s still worth a call.

“We can give you some tips, relate some experiences someone else in a similar situation has had,” says Capozzoli. “Call us. We can help.” 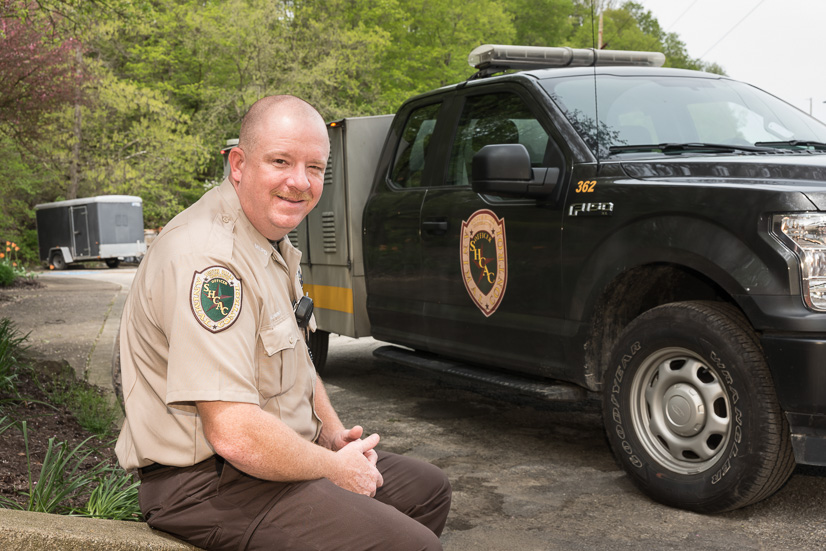 The best part of the job is reuniting pets with owners, something Animal Control has had great success with since its founding. The kennel at Upper St. Clair has been in operation since 1978. Last year, of the 26 lost pets picked up in Mt. Lebanon, 24 of them were returned to their owners. “People are, understandably, extremely distraught when they contact us, and it’s always a great feeling to send their pets home,” says Lehman.

Call Animal Control if your pet is missing. Check the animal control section of the police department website, www.mtlebanonpd.org for photos and descriptions of animals housed at the kennel to see if yours is there. Still, Animal Control doesn’t like to broadcast too many details about the animals they pick up, because there are people who will claim them even though they aren’t theirs.

If you would like SHCAC to post a missing pet poster, email the details, the name of the pet, the last known location of the pet, and a picture to shcac@mtlebanon.org.

Shorten the time you’re away from a lost pet by chipping them—and remember to keep your chip registration information up to date.