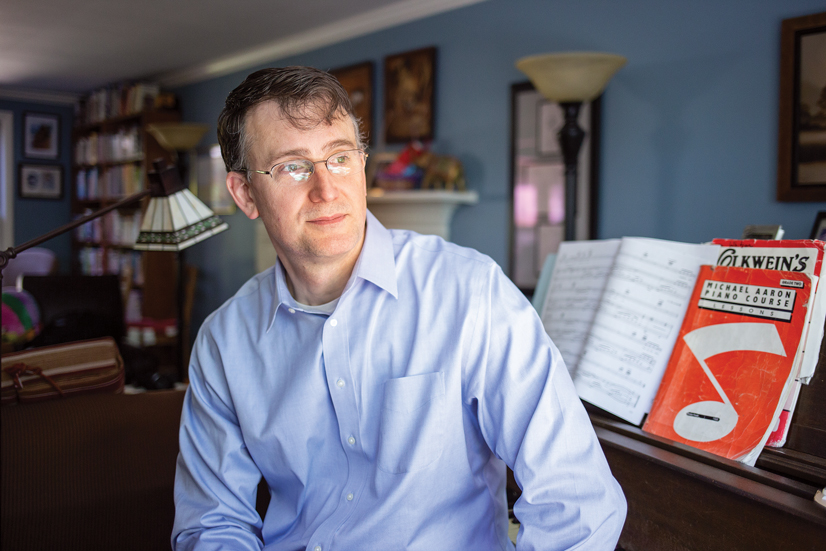 don’t like to talk about that superhero stuff, but everything else seems fine,” Keith Whitson, Abington Drive, quipped when I explained to him that I would figure out the angle of the story after our interview—For example, if he were to tell me he runs around in a cape, fighting crime at night, I’d probably focus on that a bit more than his legal pro bono work.

He jokes, but when you think about the fact that he has represented more than two dozen immigrants seeking asylum free-of-charge over the past decade, you realize he might actually be the real-life equivalent of a superhero.

“This truly is a good place to raise a family … There’s a great sense of community,” says Whitson, an Allentown, Pennsylvania, native. He moved to Pittsburgh in 1994 and has been in the same neighborhood in Mt. Lebanon since 1996. He coached Mt. Lebanon recreation leagues in youth basketball and soccer, when his kids were younger. “My hobbies have always been whatever my kids are doing, and my community service work that I do.”

His service projects include being a board member of the Women and Girls Foundation and the Jewish Family & Children’s Service’s Legal Services for Immigrants and Internationals program, as well as being an active member of the Pittsburgh Legal Diversity & Inclusion Coalition. But probably his longest-standing community service efforts have been through the Allegheny County Bar Foundation, where he currently serves as vice president.

“There’s a lot of unfairness and discrimination in the world … By focusing my efforts on diversity, inclusion and immigration issues, I could best try to help eliminate discrimination, overt or institutional, and make the world a little more fair for everyone,” says Whitson.

We had to fit our interview into a 30-minute window, because he was on call for a Master Calendar Hearing for a pro bono immigration case. He couldn’t say more because, even without mentioning names, he has to be careful talking about his clients’ situations—many of them are still fearful of their locations becoming known. He did, however, receive permission to discuss a couple of his more memorable cases from the past decade.

Whitson once helped a Rwandan woman who was seeking asylum for her two daughters. Her husband, who was an officer in the Rwandan Patriotic Front, had become abusive toward her because of her background and political beliefs, so she fled the country and eventually came to the U.S. on a student visa. She was not able to bring her daughters, however, whom she had left in hiding in Uganda. Whitson helped her to apply for asylum for herself and derivative asylum for her daughters. After two years of hearings and countless hours spent working with the embassy in Kampala, Uganda, their asylums were granted.

“I was ecstatic. When they arrived in Pittsburgh to be reunited with their mother, that was such a special moment,” says Whitson. “I feel a bond with them. She and her daughters even joined us for Thanksgiving one year. After all that they had been through, to feel like they could start a new life here, and be safe, is incredible.”

In another case, Whitson represented an Iraqi man who helped the injured during the Iraq War—including members of the U.S. armed forces—while also providing medical supplies to the Multi-National Force. These activities made him a target for various insurgent groups. After almost dying in a shootout, he had to flee to Jordan, where his wife died of a stroke. Unfortunately, he could not stay in Jordan for long, but was too afraid to return to Iraq. He decided to come to the U.S., where Whitson prepared an asylum application for him, and helped him rebuild his life here in Pittsburgh.

“That’s the sort of story you get in every one of these cases,” says Whitson. “The strength of some of these people, after the atrocities they have been through­—it’s really moving.”

Since his normal work at Schnader involves protecting businesses and corporate clients, he relies heavily on the Pro Bono Center at the Allegheny County Bar Foundation to provide him with the resources he needs—from malpractice insurance to training to online legal resources—to pursue these cases.

“At the end of the day, what I do as a lawyer is problem-solving, resolving disputes and coming up with creative ways to remove obstacles,” says Whitson. “It doesn’t matter whether it’s a corporate client [at Schader], or a recent immigrant… who doesn’t have the resources or ability to defend themselves. It’s still problem solving.”

According to the American Bar Association, there is a professional obligation, detailed in the Model Rules of Professional Conduct, for lawyers to provide pro bono services to those who cannot afford them. This rule recommends that lawyers should strive to provide at least 50 hours of pro bono services each year. Some, like Whitson, choose to go far beyond that and offer services in the areas where they can have an impact.

“But it’s not just an obligation. There’s a great need out there, and I’m in a position to help,” says Whitson. “It means a lot if I can help someone find a place where they feel safe for the first time. That changes lives.”