When  Mike Baker walked into the first session of the 2012 Citizen Fire Academy, JoAnne Bova saw a reasonably cute guy in jeans and a green polo shirt. He registered on her radar, but mainly she was excited about the class. Born into a family of firefighters in western New York, JoAnne grew up hearing their stories. Also, as a very active Relay for Life volunteer, an event in which the Mt. Lebanon Fire Department has a very strong presence, JoAnne had gotten to be friends with a number of Mt. Lebanon firefighters.

Mike’s interest in taking the academy stemmed from seeing the department responding to an apartment fire a couple of blocks from his Broadmoor Avenue home. “I saw all these firefighters and vehicles, and I was just so impressed with their coordination, the way they operated,” he says. After stepping down a few years earlier as a Mt. Lebanon High School crew team coach, Mike was looking for something to do in his spare time, something that carried a physical and mental challenge.

So JoAnne, Mike and 11 other adventurers formed up into the CFA Class of 2012. They were divided into teams of four and five. Although JoAnne and Mike were on different teams, they kind of gravitated toward each other at the class sessions, which covered many aspects of fire department operations, vehicle rescue, other types of rescue, self-contained breathing, ladder operations and lots more. Mike and JoAnne became part of a knot of classmates who began socializing outside of class. 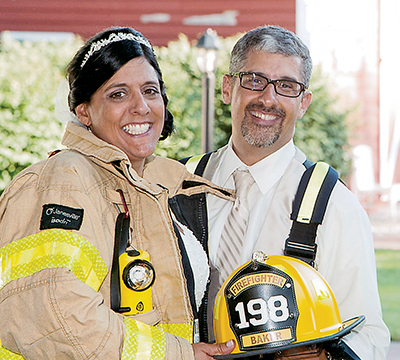 Toward the end of the class, Mike, an IT analyst for Eaton Corporation, decided he wanted to join the volunteer department. JoAnne, a speech therapist, really wanted to join but just could not carve out the significant time commitment. So she did the next best thing: She became Mike’s coach all through his training, making up flash cards, encouraging him through the physical training, and in the process, the two got to know each other better, found out all the stuff they had in common, really enjoyed each other’s company.

In March, 2013, (the 19th to be exact), JoAnne showed up at Mike’s house for a coaching session, and found wine, and candlelight, and something great on the stove, and JoAnne thought to herself “Huh! This is a date! Glad I wore something nice, instead of coming straight from the gym.”

Things progressed from there, and last month, Mike and JoAnne Baker celebrated their first wedding anniversary. Life has been sweet, except for one point of contention: They argue about who gets to clean the gutters.

“I’m just as good as Mike is on ladders,” JoAnne says. “Maybe better.”

This year’s Citizen Fire Academy goes from September 14 to November 5. Registration is open to residents and business owners 18 and older from Mt. Lebanon, Dormont or Castle Shannon. Download an application  or pick one up at the Public Safety Building, 555 Washington Road. Soulmates not guaranteed, but who knows?