Have you ever found yourself stuck tagging along to run mundane and daunting errands? Have you exhausted your quota of complaints and relinquished yourself to the fact that you’re along for the ride to buy a gallon of milk and score some new socks? Do you ever get bored at home?

I created a few pointless, time-busting activities to endure the monotonous and maybe score some snickering smiles. Here are some of the games my family plays to stay entertained in the mundane.

When shopping with someone, if dragging yourself around like an annoyed shadow at the mall doesn’t sound like an ideal way to pass the time, break off and get lost. Then FaceTime the person you’re supposed to be shadowing and make them start a treasure hunt to locate you. Besides watching your smiling face evade their sights, they need to observe your limited surroundings to nab you and continue their daunting task—finding you.

If you’re stealthy and swift enough, you can buy yourself time by dodging around like a ninja and keeping your pursuer guessing. For extra kicks, try to dress yourself in camouflage or all black to see if you can blend in with your environment. Just note that this might work against you if you stop in a children’s brightly colored clothing store. In that case, seek out a tie-dye ensemble.

Perhaps you’ll annoy them enough to abandon their errand and agree to go home.

This one’s perfect if you’re stuck at home (after all, quarantine is still a thing whether we like it or not.). Bonus points if creative kids participate.

Find random stuff around your house to build a spaceship. If your construction site resides in front of the TV, maybe you can find some old episode of Star Trek to create an immersive experience.

The possibilities are only limited in your mind. Grab a laundry basket (a spaceship needs structure, right?). Then toss random things into it. Don’t forget that flying objects require a control panel (can we say cheese grater and iPad?). What about a steering wheel? If you don’t install one, your flight will be doomed to crash in the middle of oblivion. Find a paper plate to ensure smooth steering to your final destination.

These suggestions come from the most uncreative individual in Mt. Lebanon, so it’s likely you’ll trump the idea of traveling with a cheese grater and paper plate plopped in the middle of a used laundry basket. And one last note—don’t forget the helmet!

This started with a road trip out west. It’s simple. Spot a cow, claim a cow. Build an army of cows and your own virtual farm using things you see out the window on your car ride.

The game morphed into a rule-less sophisticated competition where arguments fling around as much as cow patties would during a stampede. Hay bales and even working farm hands spotted in the fields were all claimed to build an imaginary working farm that only existed in the game player’s head. How do you claim something? It’s simple: if you see it, shout out what you’re claiming. Example: “That’s my barn!” Then it’s yours to store away in your imagination. 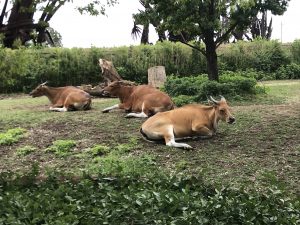 This game incurred countless revisions to the point that it’s now played on a trip to Giant Eagle. For example, a house near Mellon Middle School boasts a chicken coop and it all can start there. The chickens kick off the game (shout, “my chicken” once you see one!). After the chicken acquisition, random businesses are spotted and snatched. For example, if you pass the Mt. Lebanon Medicine Shoppe, you yell out, “my Mt. Lebanon Medicine Shoppe!” And it’s yours, with one caveat: You must justify the need of said claimed item or property. So, if you claim that pharmacy, you better have good reason. It’s acceptable to proclaim that your chickens sometimes suffer unexpected illnesses so a medicine shop most certainly is critical to your operation. The game is played until you reach your destination.

Who wins? The one with the most stuff or whoever argues the loudest and used their smarts to announce a plague hit the other player’s property and all living creatures fell victim and died.

By sprinkling a little light-hearted fun into your everyday unavoidable life, long hours may be a little more palatable. Sprinkle a little silliness into the day—you can create your own games for fun—and maybe you’ll find yourself giggling at the absurdity that your party endured during unavoidable mundane moments.

Does your family have any made-up games you play to pass the time? Share them in the comments below.