Everyone who knew former Mt. Lebanon Municipal Manager Bill Baldwin has a train story to tell.

“If you talked with Bill for an hour, trains would come up,” says Alex Parrish, president of the Mt. Lebanon Lions Club, of which Baldwin was a longtime member. “Maybe less than an hour.”

Baldwin, who died in December 2017 at 81, served as Mt. Lebanon’s assistant municipal manager from 1987 to 1990 and manager from 1990 to 2001. His family requested that donations in his memory go to the Historical Society of Mount Lebanon or the Mt. Lebanon Public Library.

“We all knew how much he loved model trains,” says Library Director Robyn Vittek. “There are only so many books about trains that you can buy.” So, the members of the South Hills Model Railroad Club, of which Baldwin was a founding member, had an idea. How about a trolley? 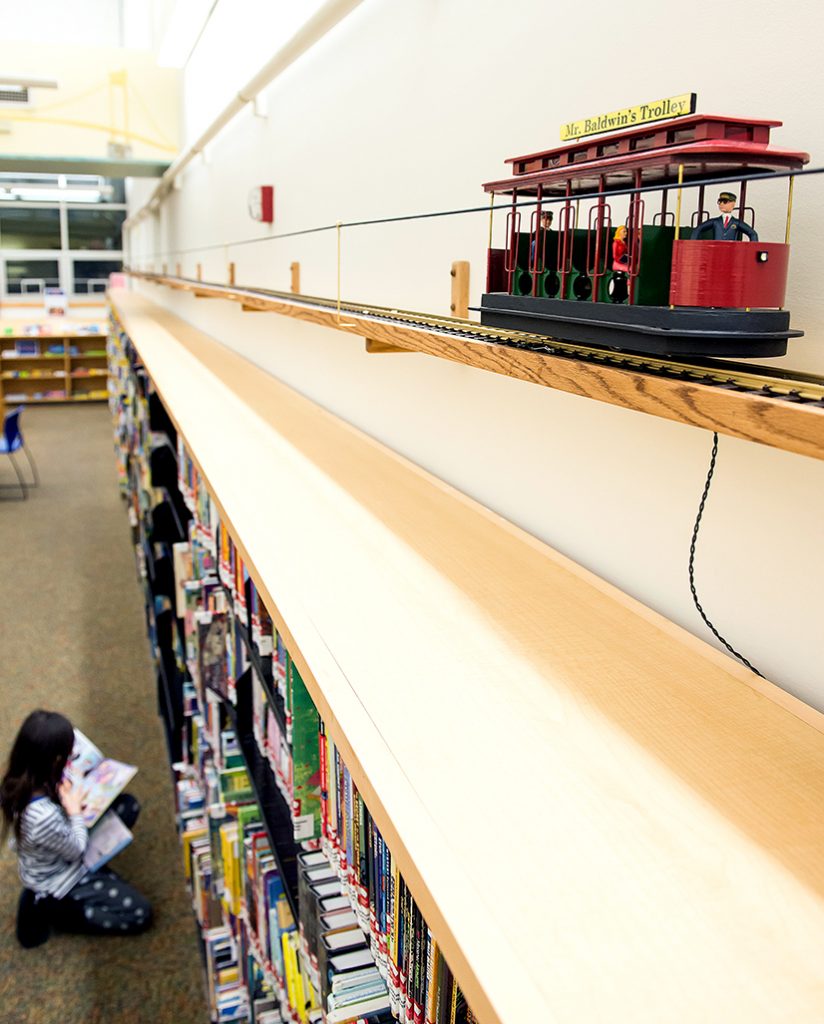 Dave Bodnar, another founding member of the club, knew Baldwin professionally from Bodnar’s days as director of technology for Mt. Lebanon School District. “I go back maybe 40 years with Bill,” says Bodnar. “He had an encyclopedic knowledge of trains.”

The idea was for a model of everyone’s favorite trolley—the one that made the trip from Mister Rogers’ house to the Land of Make Believe. Mr. Baldwin’s Trolley. “You can’t buy one,” says Bodnar. “So, I built one.”

Bodnar built the trolley and installed the electronics that power it on the track that runs along the south wall of the children’s library.

Children (and adults) can make the trolley go by pushing a button. When it reaches the end of the line, it stops and reverses course. The trolley has two conductors and three passengers. Club member Rich Aubel painted the figurines of the conductors to look like Baldwin and the passengers to look like his grandchildren.

Ray Bichler, a carpenter with the Mt. Lebanon Public Works Department, built the track the trolley runs on. Like everyone else, he has a train story. “One year, I took my daughter to see the model trains at the Carnegie Science Center, and out of a back room, here comes Mr. Baldwin,” Bichler says. “He was helping with the setup, and he took us on a guided tour of the whole thing.”

Although the trolley is up and running, the library is still collecting funds for one last touch: a proposed mural by muralist Michelle Ambrosic, which would take the trolley past the library Baldwin loved, the municipal building where he worked, and his home on Lindendale Drive. Donations can be made to the library in memory of Bill Baldwin.

Jean Baldwin was married to Bill for more than 50 years. Their grandson, Alexander Baldwin Konitsky, son of daughter, Maria and her husband, William, of Flint Ridge Road, pushed the button that sent Mr. Baldwin’s Trolley on its inaugural run.

“If Bill was here, he would be telling you everything about this make and model,” Jean says. “Then he’d say, ‘Let’s have some fun and run the trolley!’”