There is a protocol for respectfully retiring America flags that are too tattered to continue to serve as a symbol of the United States. On Memorial Day, local Boy Scouts and Girl Scouts performed an official  flag retirement ceremony at Mt. Lebanon’s Veterans Memorial. If you find your flag is too tattered to fly on July 4, you can drop it off at the South Park Flag Retirement Plaza. Call 412-835-4809 or 412-835-4810.

The American flag deserves respect, even when it can no longer be flown. According to the United States Flag Code, “when a flag is so tattered that it no longer fits to serve as a symbol of the United States, it should be destroyed in a dignified manner, preferably by burning.” 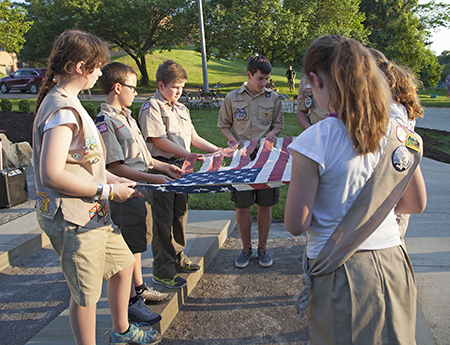 Boy Scouts and Girl Scouts of America are among several organizations that  are qualified to perform a flag retirement ceremony. On Memorial Day, local scouts held the ceremony at the Mt. Lebanon Veterans Memorial for a number of worn-out flags.

The scouts begin by cutting the flag into pieces, taking care not to cut the blue field of stars, since that represents the unity of the 50 states.

While some scouts are performing the flag dissection, others start and tend a medium-size wood fire, preferably in a metal drum or incinerator. Once the flag remnants and fire are ready, the scouts perform their ceremony and maintain a vigil over the fire until all traces of the flag remnants are destroyed. Then, the fire is extinguished and the ashes are buried. The burial can be completed with a moment of silence while a bugler plays taps.

The Boy Scouts also have a flag pavilion in South Park where they perform the ceremony regularly.