Kaitlyn Orstein-Fife, Mt. Lebanon High School Class of 2004, has been named to the Western Pennsylvania Interscholastic Athletic League (WPIAL) Hall of Fame. A swimmer, Orstein-Fife qualified as an All-American 25 times in her high school career. She won a state championship in the 100-meter breaststroke four years in a row and twice won the 200-meter individual medley. She also won numerous WPIAL titles and finished her career with school records in six of the eight individual events. Orstein-Fife enjoyed a successful college career at Washington & Jefferson, where she was a 14-time NCAA Division III All-American. She won eight NCAA titles and held the NCAA Division III national record in the 200-meter individual medley for five years.

West Point graduate Jon Lindefjeld, Mt. Lebanon Class of 2011, has received a Rotary Foundation Global Grant Scholarship to study infectious disease at Trinity College in Dublin, Ireland. Lindefjeld, who has a bachelor’s degree in environmental science, plans to attend medical school following the completion of the program at Trinity. The request for the $35,375 scholarship was submitted to the foundation by the Dormont-Mt. Lebanon-Castle Shannon Rotary Club and the Dublin Central Rotary Club.

The Mushroom Family Learning Center is on the move after 37 years at the Unitarian Universalist Church of the South Hills. The church is planning a renovation, so Mushroom is relocating permanently to the education building at Beth El Congregation, 1900 Cochran Road. Registration for the 2015-16 school years is open and tours are available by calling director Joan Harrison at 412-531-1225. For the first year at least, the programming will remain the same, Harrison says, although the administration will look at areas where it may be able to expand in the future in its new digs. While moving is never easy, Harrison says one large benefit of the new location is its secure entry. The Unitarian church was open to all, but the Beth El building has a security system that will ensure only authorized people can enter the building.

Maeve McEwen, a 2012 graduate of Mt. Lebanon High School and dance major at the University of Michigan, has been chosen to perform in the 20th anniversary celebration of the Richard Alston Dance Company in London from June 10-13. McEwen, who just completed her junior year, will appear in a duet from Richard Alston’s Brisk Singing.

Zoe Deems, a rising seventh-grader at Jefferson Middle School, had a poem ranked in the top 10 in her grade division in a national contest sponsored by Creative Communications. Her poem, In Mourning, about Abraham Lincoln, was selected from thousands of entries as one of the top 10 best in her grade division. The contest was held for students in grades K-12. The top 10 winners in each division—grades K-3, 4-6, 7-9 and 10-12—receive a $25 cash prize and a free copy of the poetry anthology A Celebration Of Poets. Deems also took first place statewide for literature in the middle school division of the PTA Reflections contest this year. 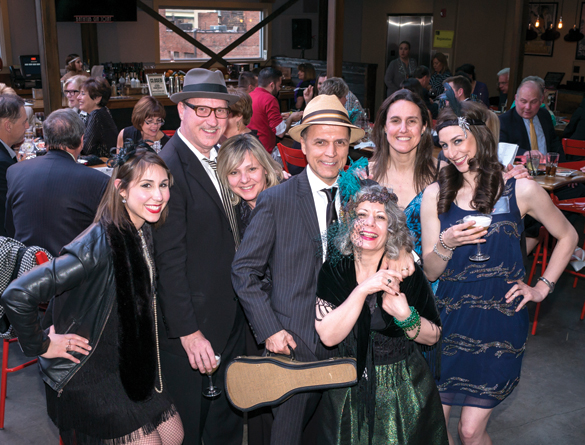 NIGHT AT THE SPEAKEASY was the theme of this year’s Outreach Teen and Family Services gala at Sienna Mercato. Event chair was Ginger Majeski, and former Outreach Board Chair Steve Darcangelo served as honorary chair. Special guest was former Pirates pitcher Steve Blass. KDKA’s Ken Rice was auctioneer for packages such as throwing out the first pitch at a Pirates game, visiting Steelers training camp and a week’s stay on Kiawah Island. The gala netted $38,000 for the nonprofit counseling service which serves young people and their families. For additional images of the event, go to photos.lebomag.com [6]. Above, from left: Rachel Roney, Dave and Patricia Klug, Wayno, Kim Honath, Jean Magazzu and Dusty Nichols.