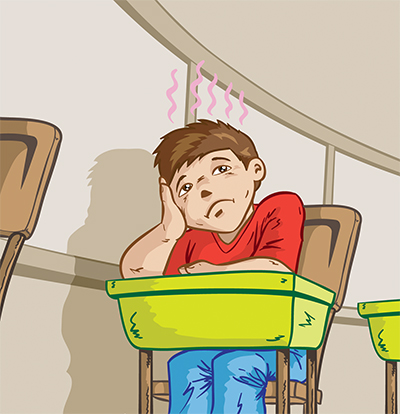 School had become the “s-word” in the Miller* house. Every September they took a deep breath and didn’t exhale until June. In the summer, their son Jake* was a happy-go-lucky kid having fun with his friends and family. However, school was difficult for him both academically and behaviorally—when school started, it was like his light went out. Recently, the school evaluated him for ADHD and as a result prepared an individual education plan to address some of his learning difficulties. The Millers didn’t quite understand ADHD or how to support Jake, so they came to Outreach for help.

The  counselor devoted the first couple of sessions to getting to know the family and educating them on ADHD. As it turned out, Mr. Miller probably understood ADHD better than he realized. He shared a lot of similar traits with Jake and remembered his experiences of failing classes, showing up late and constantly being punished. Mrs. Miller on the other hand, was skeptical. She had witnessed her son concentrate for hours on a video game and felt his lack of attention to chores and the disorganization of his room was the result not of ADHD but of not caring. The counselor explained that the constant stimulation, action, and change of scenery in video games are very appealing to someone with ADHD because they utilize parts of the brain separate from those required to organize, think ahead and focus on detail. For a child with ADHD, picking out important sensory information from among competing internal and external stimuli can be difficult. Jake would sometimes get in trouble for not following directions but would not even know what his parents were talking about.

The counselor helped Jake work through his issues with time, direction and organization by teaching him tricks to remember and prioritize information and tasks. The family also met to jointly agree on a schedule and routine that would take some of the guesswork out of Jake’s day and turn it into a habit. For example, Jake was now in charge of clearing the table after every dinner instead of random weekly chores and he used that open space to work on homework one subject at a time.

However, the work didn’t end there. Jake, like many other kids struggling with ADHD, often felt stupid, discouraged and lacking in confidence in his ability to manage school and social relationships. The counselor helped Jake and his parents identify and build upon his strengths. Jake recognized that his kinesthetic learning style, while not always supported in school, could be utilized at home and helped him see the world in unique ways. He focused on what was going well with his best friend and used insights from this relationship to make new friendships. Jake also joined a swim club and took acting classes. Not only did these things help him expend his energy, but  for the first time in a while, he felt like he was good at something. Now Jake approaches school and manages his ADHD with more confidence.

*Jake and the Millers represent a typical Outreach client. Details do not correspond with specific cases. Outreach Teen & Family Services is a nonprofit, confidential counseling service. We offer counseling and educational programs to youth and parents that are affordable, accessible and discreet; all within a welcoming, supportive environment.