The older Greg* got, the more impulsive he became until at 14 his emotions frequently caused out-of-control explosions of anger, culminating with his punching walls, slamming doors and using a vocabulary that would make Martin Scorsese blush.

As time went on, he had increasing pressures at school, including difficulty with academics, a massive workload, heavy emphasis on sports, social pressure, and of course, the drama of being in high school. “Everything feels very important,” he says.

“It adds a lot of stress. You just feel like you have to do everything 110 percent to be successful.” 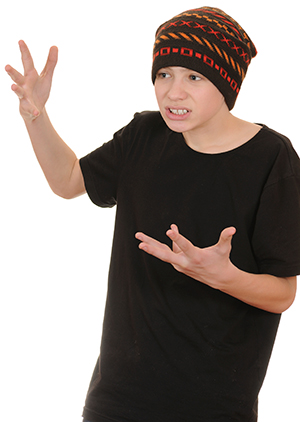 Enhanced by the hormones of becoming an adolescent, Greg’s moods became worse, upsetting his parents and siblings until they ran out of ideas for dealing with him. Heightened by his diagnoses of attention deficit disorder and anxiety, he saw pediatricians and psychiatrists, who gave him medication and some counseling, but it didn’t help.

“We felt hopeless. We couldn’t control the situation. We needed a plan,” says his mother, Missy. “It was unhealthy for our family. We just didn’t know what to do.”

She had always known about Outreach Teen & Family Services, the nonprofit counseling service on Washington Road in Mt. Lebanon, and decided to give it a try. Thankfully, they began to see good results. “He was much more relaxed,” Missy says.

“It felt more like talking than anything,” says Greg. After two years of twice-monthly visits (sometimes more, sometimes fewer), the Mt. Lebanon High School student feels much more in control. “So you might blow up a little, but it’s not as intense,” he says. The sessions are a partnership between him and his counselor. “It’s more of a collaboration. You get to make all of the decisions.”

In this family’s case, the counselor helped them draft a contract, so Greg would always know what behavior was expected and what consequences would follow and so his parents would know when to react (and how to not overreact), to avoid causing emotional escalations in the episodes.

“I feel such an immense difference,” Greg says.

He is far from alone. Last fiscal year 1,031 clients sought help from Outreach, 609 of them from Mt. Lebanon. The organization’s client base is age five to 21 but the bulk of clients are ages 12 to 17, evenly split between male and female.

A 2014 article in the Journal of the American Medical Association says up to 20 percent of adolescents experience an episode of major depression by the time they turn 18, yet few get help.

That’s why this fall is an important time of year for the 41-year-old Outreach, which begins its fundraising campaign this month (Look for an envelope in the November issue of mtl) to help serve more local families.

Outreach’s annual $595,000 budget is funded through a variety of sources, not the least of which is Mt. Lebanon taxpayers, who kick in 18 percent of the revenue. In return, residents get a generous allowance toward getting help through a unique partnership. Residents get two free counseling sessions. Sessions number three through 10 cost residents $15 each and all sessions after that cost $40 each. Clients may also use their health insurance to pay for sessions. (Non-residents pay $40 per session.) For those who can’t afford that, Outreach bills on a sliding scale.
Other funding comes from programs Outreach runs at Chartiers-Houston School District, Bidwell Training Center, Pittsburgh Technical Institute and Allegheny County and from religious organizations, insurance companies and foundations, just to name a few.

But individual gifts are just 5 percent of Outreach’s revenue sources. That’s not high enough, Birks says. “Individual giving is what sustains an organization. We haven’t really let the community know that we need their help.”
Outreach also has community fundraisers, including a gala each spring. The agency’s fifth annual Purse Bash is Friday, November 6,  at the Fairview Fire Hall’s Sunset Room on Washington Pike in Bridgeville.

It’s not just the funding model that’s unique. Outreach operates differently from a typical mental health facility. In most cases, the counselors don’t diagnose kids or give them a label, Birks says, unless it is medically necessary for treatment. Counselors use cognitive behavior therapy to work with clients “to give them skills necessary to deal with life, because it’s just coming at them at 100 miles per hour,” Birks says.

“The counselor I was given ended up being one of the best people I ever met, and our conversations were always meaningful,” says John, a former client who graduated from Mt. Lebanon High School this year. “It was really difficult to find solutions to the problems I was dealing with, and sometimes there weren’t even any solutions to begin with. But in the end, I think that simply talking about what’s bothering you can be a big help.”

Outreach has fought the notion that it is just for kids. In the case of Grace and her children, ages 17 and 14, the counseling was addressed to all three of them, as they learned to deal with anxiety and the life changes that come when a family falls apart. “They taught us coping skills together and separately and taught us how to learn to be a family of three instead of four.”

The most important thing the counselor told Grace was “That’s OK” and “You’re normal,” but most of all, “She said to ‘Just breathe.’ I wasn’t breathing. I was so hyped up.” She knew the kids were being helped because they started to look to the counselor as a refuge. “When things would get really bad, the first person they wanted to call was the therapist, because they knew that was the person to help.”

For another family, accessibility to Outreach was critical. Trent was a freshman in high school and had top grades and lots of friends. Yet his father, Gordon, noticed that something was not right. Trent had a shorter temper and just seemed off. When Gordon and his wife talked to him, Trent told them he needed help because he thought he was depressed.

When they called local mental health providers, they found that the process for getting him care would take longer than they had hoped. “Outreach wasn’t the first place we called. It was the most receptive place we called,” says Gordon. After making the family feel comfortable and after fewer than six months of sessions at Outreach, Trent had some strategies for dealing with his issues; he had learned meditation and relaxation techniques and better ways of communicating with his parents. “The ability to talk to us got better,” Gordon says.

It wasn’t their last visit with Outreach. When Trent, now 19, came home from college for summer break, some of the same issues cropped up. But because his family had moved away from Pittsburgh and then back again, they had no family physician. “Nobody would see him,” Gordon says. Remembering their good experience, they again called Outreach, who fit Trent right back in to their schedule.

“I don’t know if you’d call Outreach a lifesaver. That sounds dramatic,” Gordon says. “But maybe it was.”
When John, 17, came to Outreach, he was looking for ways to combat the intense loneliness he had experienced throughout high school.  As he talked, he began to feel less isolated. “My counselor helped me by taking me and my problems seriously,” he says. “He respected my interests and views, something that most people I know never did for me.”Outreach has 20 counselors, with a minimum of master’s level education in counseling or social work, and an office staff of five. Many of the counselors are licensed, and one staffer has a Ph.D.

“It doesn’t need to be a huge deal that you’re going to counseling,” Greg says, noting several of his friends followed his lead and sought help with their issues. “It’s really just helpful for anyone, even if you have your life together.”

For John, talking with a counselor helped him deal with life until he graduated this year and left high school behind. “The best solution is realizing the majority of problems are only temporary,” he says. “I was only unhappy because of my environment, and so what fixed things for me was eventually leaving. I couldn’t do that during high school, but I persevered until the end. I’m on my way to the university of my choice and will be studying the things I want to make a career out of. As long as people work hard through adversity and never lose sight of their goals, they can succeed.”

For more information, see Outreach’s website at: www.outreachteen.org. Read a history of the agency and some of the programs it offers.

* The clients and families in this story chose to use pseudonyms to protect their privacy.