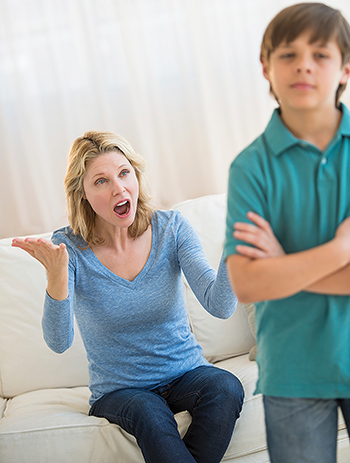 Jan* lay in bed thinking about the day’s events and her interactions with the kids, and feeling guilty and defeated. Being a single mom was hard, but she made herself feel worse when inevitably and despite her best intentions, she would let her anger get the best of her and erupt into a yelling maniac she didn’t even recognize. Not only was she feeling out of control, her kids had begun to scream at each other and use phrases she found all too familiar. Jan couldn’t seem to change this pattern on her own. She decided to call Outreach for a parent consult.

It felt good to finally get things off her chest and tell someone else about her struggle to control her temper. For a long time, Jan felt so ashamed and couldn’t talk to other moms she perceived as being so perfect. She was relieved to find out that the counselor did not judge her and that she was not alone in battling her anger. The first thing they sought to uncover was Jan’s triggers. Typically, Jan would yell when she was overwhelmed with tasks and rushing. If the kids didn’t immediately respond and sometimes before they even had a chance to, she would start yelling. Jan’s perception was that they didn’t listen until she raised her voice, so sometimes she would cut to the chase. Her counselor suggested that it probably wasn’t the yelling that prompted a response from her kids; it was that the yelling signaled she was finally serious and willing to do something about the situation. They knew they could ignore a calm “please turn off the TV” and buy some extra time until mom started screaming and would take away future TV privileges. Jan realized she had to begin stating a consequence calmly and following through earlier before she lost her temper.

Jan also believed that to be an effective parent, she had to respond immediately to issues that arose with her children. She was not allowing herself time to calm down, much less think about the best way to handle a situation. Her new plan was to tell the kids something such as, “Taking each other’s things and fighting is not acceptable; I need some time to go calm down and think about the best way to handle this, and then I will come back and talk to you.” By using this method, Jan was modeling for her children a positive way to handle anger and conflict. She also learned to refrain from threatening her kids with extreme consequences that she never intended to implement. In addition, Jan made a plan to take better care of herself and not let stress accumulate. She decided to join a weekly exercise class and spend 10 minutes resting in her room after work each day before making dinner.

Parents don’t have to be perfect; they can use their own emotions and struggles as teachable and relatable moments. Jan learned to acknowledge her needs and respond to them so that she could be a more effective parent and improve her relationship with her children.

*Jan represents a typical Outreach client. Details do not correspond with any specific case in order to protect client anonymity.

Outreach Teen & Family Services is a nonprofit, confidential counseling service. We offer counseling and educational programs to youth and parents that are affordable, accessible and discreet; all within a welcoming, supportive environment. This column is made possible in part by the Mt. Lebanon Police Association.