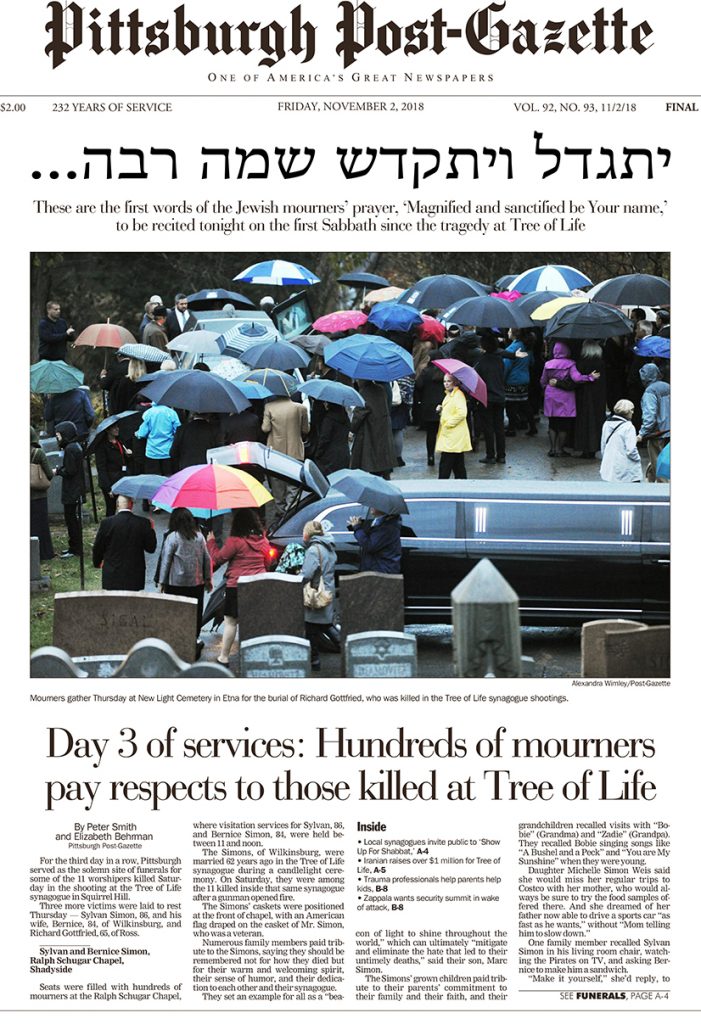 The staff of the Pittsburgh Post-Gazette won the prestigious 2019 Pulitzer Prize for breaking news reporting for its coverage of the Tree of Life shooting last October. The PG received the award “For immersive, compassionate coverage of the massacre at Pittsburgh’s Tree of Life synagogue that captured the anguish and resilience of a community thrust into grief,” says the announcement.

“The staff is humbled by this honor, but we would trade it in a millisecond if only such horror had never been visited upon our community,” says enterprise reporter Michael A. Fuoco, Cedar Boulevard. “Our duty as journalists is to report so that our readers will know, understand and feel, and to do so with compassion and grace. The Pulitzer affirms our commitment to that, not just on days of terror but 365 days a year.”

The award criteria dictate the winner should be “a distinguished example of local, state or national reporting of breaking news that, as quickly as possible, captures events accurately as they occur, and, as time passes, illuminates, provides context and expands upon the initial coverage.” Columbia University administers the award, which carries with it a $15,000 prize. The Post-Gazette’s entry include online and print articles, images and multimedia pieces.

The award went to the entire staff, many of whom live in Mt. Lebanon. Whether the person had a byline or not, many contributed in some way to the award-winning coverage. In addition to Fuoco, Mt. Lebanon’s PGers are: Bob Batz, Linda Wilson Fuoco, Joyce Gannon, Kevin Kirkland, Jim Mendenhall, Marylynne Pitz, Bill Schackner, Jonathan D. Silver, Matt Smith, Peter Smith, Joe Smydo, Will Tomer, Steve Twedt, Kurt Weber, Dan Gigler (Mt. Lebanon Class of 1995, who now lives on the South Side) and Maura Losch (Mt. Lebanon Class of 2010, who now lives in Brookline.)

Michael A. Fuoco also is president of the Newspaper Guild of Pittsburgh, representing 150 journalists at the Post-Gazette. Read the winning pieces at: www.pulitzer.org [1].