Mt. Lebanon Partnership, a non-profit community development organization with a mission of increasing the vitality and vibrancy of our business districts, has a huge job. The 18-member volunteer board does everything from helping to recruit and retain shops to assisting with parking planning to spearheading ideas for improvements for signs and such amenities as benches. But one of the most important things it does is called “placemaking”—creating a strong sense of place so that consumers who are drawn here for signature events such as ULTRAparty, Farmer’s Market, Plein Air or First Friday will return to dine, shop and visit the service providers.

Events are key to the partnership’s mission, and as the partnership has learned, events have life cycles. That’s just one of the reasons the Partnership is reviewing the events it organizes, specifically, First Friday, ULTRAparty and Plein Air Mt. Lebanon to see which events need to be updated and which are still going strong.

First Fridays, which were on a reduced schedule last year because of lack of funding, are back with vigor this year, thanks to a full sponsorship from WesBanco. Held the first Friday of each summer month, from 7 to 10 p.m. in Clearview Common on Washington Road, each First Friday includes a band in the pavilion, and usually a second one near WesBanco on Washington Road. The bands booked for this year include:

July: Fungus (on the main stage to help celebrate the 50th anniversary of the Grateful Dead), and Lost Dogs (second stage)

September: Guaracha (a 10-piece Cuban band with a dance instructor to teach the crowd moves).

ULTRAparty, normally held the first Saturday in August, is changing to a different time and theme. “It’s not going away,” says Eric Milliron, Mt. Lebanon Commercial Districts Manager and the staff liaison to the Partnership. But it will be changing scope, names and dates. “We’ve been losing crowd. The revenues have been dropping.”

For the last seven years, ULTRAparty has closed Washington Road, brought in beer trucks and provided a band in the middle of the street. “We want to try to do a smaller, more nimble event, but with a bang,” Milliron says. Ideas under consideration include an adult Halloween party in October or even an Oktoberfest-style event. But the main idea is to plan an event with “long-term sustainability.”

ULTRAparty made money for non-profit groups and, most recently, a group called Accessible Lebo, which used the funds for accessible play equipment in Mt. Lebanon Park. But closing Washington Road for several blocks and hiring police to direct traffic for hours was expensive. Additionally, the same volunteers tended to work each year and became “burned out,” Milliron says. “We want to keep things fresh.” 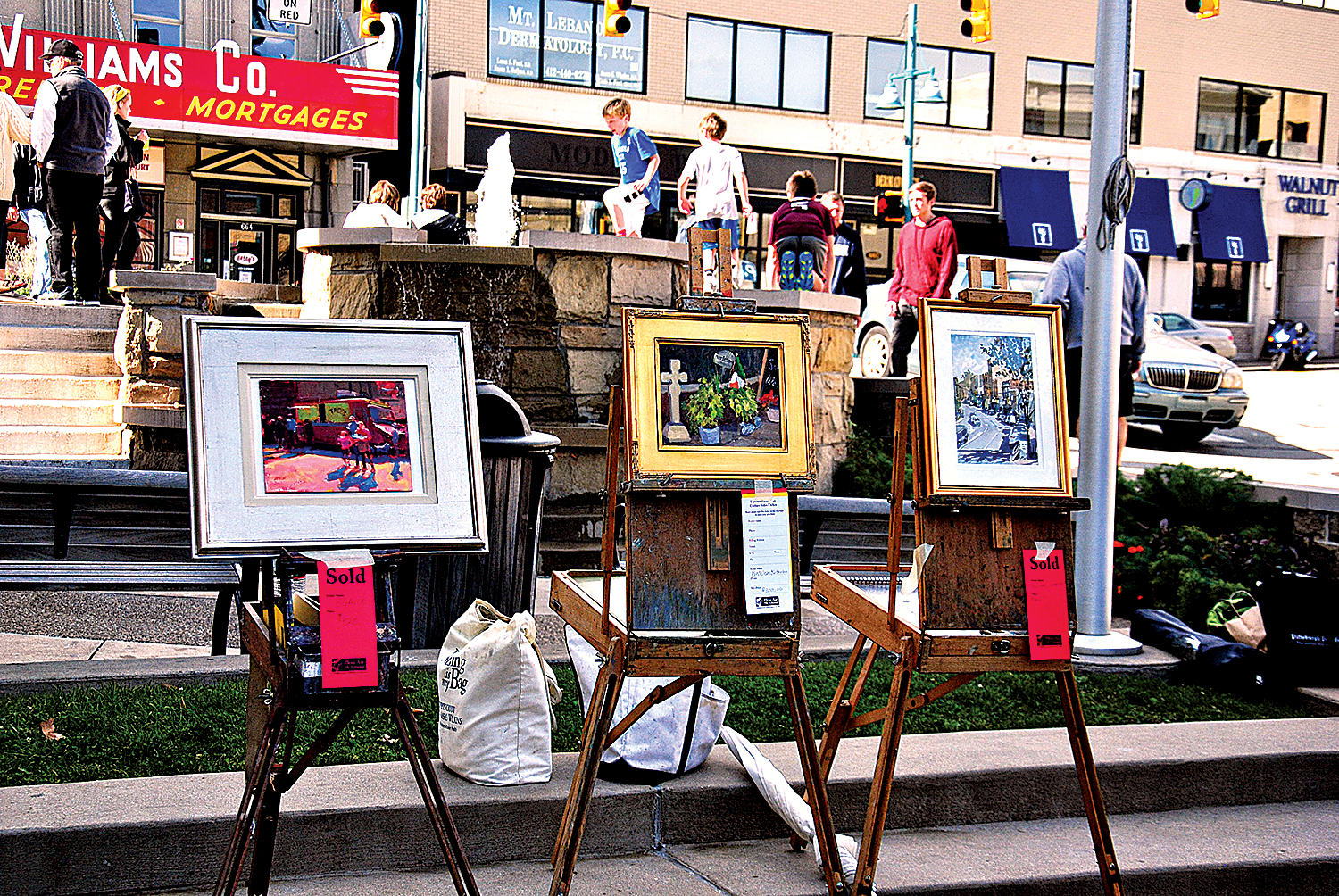 The same is true for Plein Air Mt. Lebanon, a neighborhood festival of the arts, which brought in two dozen painters who parked their easels in Mt. Lebanon and city neighborhoods over the course of a week. Demonstrations, artist lectures and classes filled the evenings preceding the juried competition. The event closed with a formal gala; the Partnership sold the paintings, splitting proceeds with the artists, and a hectic weekend of activities followed. Again, the scope of the project required dozens of volunteers. The event chairs were overwhelmed for weeks and in the end, the festival didn’t end up earning very much money.

“Most Plein Air events have full-time staffs all year,” says Milliron. He is thrilled that Plein Air made a profit for all three of its years. “But there’s only so many gallons of gas in the tank. It’s not sustainable in its current design.”

To remedy that but keep the parts that worked, the Partnership plans to move the event to Spring 2016 and give it a more local flavor. Favorite events, such as the Paint-Out and children’s activities, will stay, but the expensive gala and gallery sales will be eliminated. Artists will be responsible for selling their own paintings.

The Partnership also is throwing more of its time and energy behind the Mt. Lebanon Artists’ Market, which rebranded itself last year and is chaired by Create-a-Frame/Handworks’ Steve and Wendy Denenberg.  The family-friendly market is attracting artists from all over the country, with a juried event, food trucks and music in the Academy Avenue parking lot on Saturday and Sunday, September 26 and 27.

Milliron expects it to be “an annual big deal.”

To keep up with the plans, check future issues of mtl and go to: www.mtlebopartnership.org/.