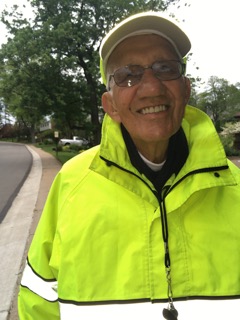 One Halloween when my younger son, Nick, was about 7 and still passionate about trick-or-treating, he walked in a yard over on Moreland Drive and started jumping up and down, screaming like a teen at a rock concert. “Mommy, Mommy look! It’s the crossing guard!”

The person Nick was ecstatic about is Paul Steitz, who manages the Robb Hollow crossing in front of Hoover Elementary every school day. For 11 years, Paul has walked that crossing, smiling and kind to each child and parent.

Many of his charges offer him a thank you or a good morning. Returning every smile and pleasant word, he is a warm and consistent thread in the fabric of our community. He maintains that smile when the temperature is zero and when the rain is coming down in sheets.

If you ask him how he feels about the weather extremes, he says, “I don’t mind. [My employers] give me good clothes.”

It is so easy to drive by and wave without thinking about the gentleman with the slightly shuffling gate wearing those bright-yellow duds. But let me tell you a little about him.

Once upon a time, Paul was a kid from Dormont who joined the Army and went to war. Can you guess which war? Would you believe World War II? Paul who laughs with the children and stands out in the heat each weekday morning and afternoon is 96 years old, according to some sources.

But if you ask Paul how old he is, he says he’s old as the hills. And I suppose if you get up every day and maintain that critical thread of the community fabric that keeps children safe and makes them feel cared for, you can be old as the hills if you want to be.

Between the war and his time as a crossing guard, he got a degree in mechanical engineering at Carnegie Tech (now Carnegie Mellon University). He was hired by a rolling mill manufacturing company in Homestead called Mesta Machinery. The company produced machines that formed massive sheets of steel for automobile manufacturing and other industrial purposes.

He married and bought the house on Moreland (a pleasant little brick typical of our post-war-baby-boom neighborhood). He and his wife raised two boys and two girls, who all attended Hoover School, where Paul now spends a portion of each school day looking after the current crop of neighborhood kids.

When asked why he keeps going to work, Paul says, “I like to do things, be active…It beats sitting watching the TV all day.”

He says the neighbors he sees (especially the ones from Moreland) will stop to visit. He says his pint-sized charges are good company.

His partner on the next corner, Ron Bathurst of Arrowood Drive, says Paul is good company, too.

“It sounds funny to say, but he’s sweet,” says Ron. Ron, who always laughs when he runs into kids at the grocery or a restaurant who can’t identify him without the bright-yellow hat, had the tables turned on him recently when Paul showed up for work in a suit.

“For a second, I didn’t recognize him,” says Ron. “I thought, who is this old guy in a suit waving at me?”

The suit that disguised Paul was for a very special occasion. Hoover Elementary was hosting Congressman Tim Murphy that day in a ceremony to honor Paul for his military service, gifting him with a set of medals he earned in WWII, including a Purple Heart. The children he looks after now were present to applaud him and thank him for his military service.

Then, you’ll get to be on that list of good company that keeps Paul smiling and tightens the weave of our community’s fabric.