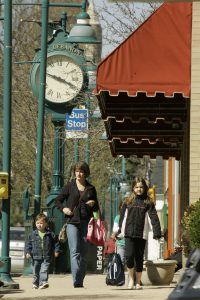 If you decide that it would be great to take a walk on Washington Road early in the morning, you will not be alone. Weather permitting, the sidewalks start to fill up before dawn. Speeds vary—runners, joggers, brisk walkers, slow walkers, dog walkers. Some travel in groups, some solitary. After a while you get to know them, sometimes by name. And they know you, too.

Early people are friendly.  They greet you with enthusiasm as they go by. But not all of them are in motion. They cue up on the sidewalk just before seven, waiting for the coffee shop or the bakery to open. People having breakfast in the hotel lobby sometimes wave as you walk by.  The maid and the porter may be standing out front, catching a furtive cigarette.

And you will probably see me too.  I’m the guy walking the big white furry dog named Izzie. People often talk directly to my dog. Once, when meeting members of the Fire Department at a reception, I found that just about everybody I spoke to remembered seeing the dog.

Inevitably, like in Brigadoon, as the sun rises, the magical world of early morning fades away and the early morning people are seamlessly replaced by a more serious group, hurrying to work and school. These replacements look away. They have the day’s events on their mind. And they don’t usually respond to your morning greeting.

That’s okay.  The sun will rise again tomorrow and I’ll do my best to be there.

Read Cliff’s blog about his dogs.