If you’d like to see some of the most exciting, and the cutest, ice hockey you’ve ever seen, you should check out Mt. Lebanon Hockey Association’s March Mites Meltdown. This free-for-spectators tournament of 19 teams of 230-plus boys and girls age 8 and younger runs this weekend, March 14 and 15, at the Mt. Lebanon Ice Center. This is the first time the Mt. Lebanon Hornets have put on the tournament for this age group, known as Mites. In past year, the Mites have been part of the Hornets’ huge MLHA Classic tournament that happens at Robert Morris University Island Sports Center over Martin Luther King Jr. weekend.

But ice hockey is getting so popular in Mt. Lebanon and in Western Pennsylvania in general, as the Post-Gazette recently reported, that there wasn’t room for the scores of Mites teams this year, and so the Hornets decided to hold this separate little tournament on home ice. For this inaugural event, this 2014-15 season’s record-number seven Hornets Mites teams will be among a field competing in three divisions — Blue, White and Red, with Red tending to to be the oldest, most experienced players.

And yes, even 8-year-olds can have a lot of hockey experience, considering that some begin as early as age 3 and skate/practice/play several times a week.

“What amazes folks the first time they see a Mite hockey game is that these little kids can really play the game!” says Parkway Drive resident Chad Wertz, who co-chaired (with Martha Avenue resident Dave Klasnick) a large cast in organizing this tourney. Wertz is an assistant coach on his son Cooper’s Hornets Mites Blue team and he also has a son, Brayden, who is a Squirt, the next age group up. 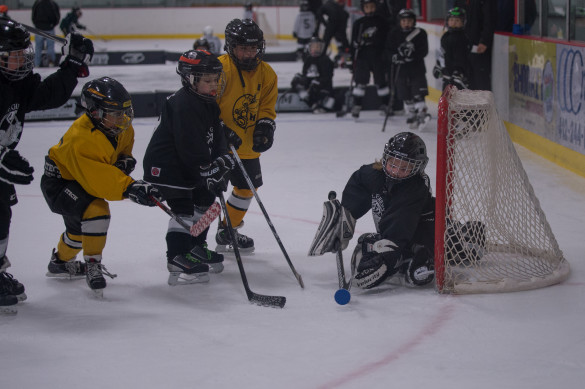 What might surprise you about Mites hockey is that you can watch more than one game at once on the same rink. Per USA Hockey’s American Development Model, the youngest players don’t play on full ice, but rather, cross-ice, with appropriately scaled-down nets. That means as many as three games can be played at one time on a rink divided into thirds with soft black “bumper” barriers.

For the Meltdown, two games will run at a time on Lebo’s main rink, with each team putting out three skaters and a goalie. They’ll play 90-second shifts in games consisting of three 12-minute periods.

The players will be competing for team cups that the champion team in each division wins; all the players in the championship games get individual trophies, too. Every player will go home with a March Meltdown T-shirt and have a team photo emailed to them.

Hockey families and spectators can bid on prize baskets put together by each Mt. Lebanon team, and the Hornets organization also will auctioning Pittsburgh Penguins souvenirs. Speaking of which, the various divisions and pools of teams have been named for Pens’ play-by-play announcer Mike Lange’s sayings, including “Great balls of fire!” (Red), “Huntin’ Moose on a Harley” (White) and “Smilin’ like a butcher’s dog” (Blue). 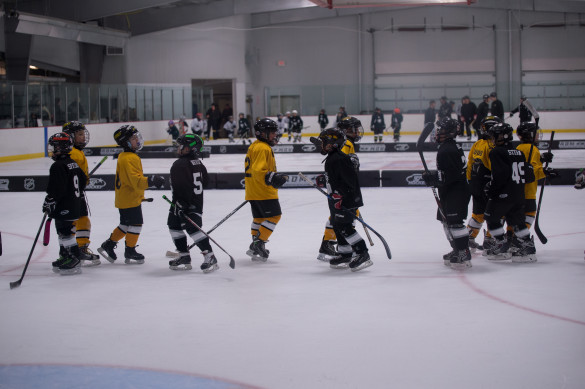 What started out because there wasn’t enough ice at a bigger tournament has morphed into a special experience for these Mite-sized players and their families, says Wertz, who emphasizes that it’s all about having fun and celebrating this winter’s hockey season. “We’re going to wrap it up in style!”

Photos by Igor Semenov of the Mt. Lebanon Hornets Mites Red team (in gold jerseys) playing the Allegheny Badgers, and shaking hands with them after it was over, in Delmont earlier this season.