If you see a bunch of police cars and big trucks off to the side of the road, you’ll know that Mt. Lebanon is in the middle of a daylong checkpoint as part of the Federal Motor Carrier Safety Assistance Program. Funded by a state grant and administered by the city of Pittsburgh, the checkpoints bring together officers from several departments to get dangerous large trucks and other commercial vehicles off the road.

If you were near the 1100 block of Washington Road in August, you saw a big inspection going on, when police from Mt. Lebanon, Robinson, Castle Shannon and West Mifflin inspected 38 vehicles, says Lt. Duane Fisher, who coordinates the program.The police conducted 28 Level One inspections, which checked driver documentation, cargo, and the exterior, interior and undercarriage of the vehicle. Officers examined 10 vehicles with a Level Three inspection, which simply goes over documents and the driver.

Commercial operators have the option of having the vehicle repaired on site or towed. If the driver has been on the road too long, the company may send another driver, but the one cited has to stay off the road for a minimum of 10 hours.

FIREPLACE INSPECTIONS Before you light your fireplace, make sure to get it professionally cleaned. Fire Chief Nick Sohyda says most log-burning fireplaces and chimneys should be cleaned once a year. If you have questions or concerns about your fireplace, call 412-343-3402 and schedule a free inspection. A firefighter will check the firebox and the creosote level. Firefighters do not go onto the roof or up the chimney, however—you’ll need a chimney sweep for that. The fire department also will check your smoke detectors while they are there. 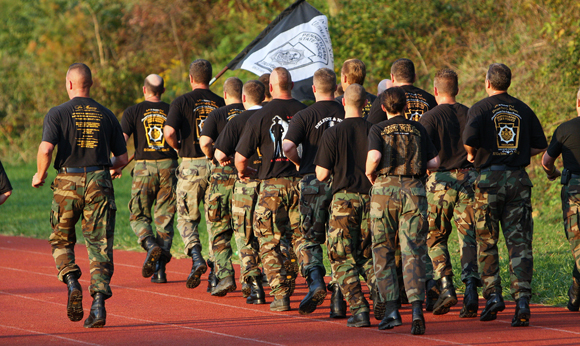 MOGADISHU MILE Registration is still open for the Mogadishu Mile 5K and CrossFit challenge on Friday, October 3 at 6 p.m. at the Jefferson track. Proceeds benefit the Wounded Warrior Project.

TOP HONORS FOR MRTSA The Medical Rescue Team South Authority received master level recognition in the Pennsylvania Department of Health’s Emergency Services for Children, Pediatric Voluntary Recognition Program. MRTSA qualified for the status because it carries an inventory of pediatric equipment as recommended by the state health department, and is inspected to make sure it meets all the standards.

The staff also completes an annual background check through Pennsylvania Childline and the Pennsylvania State Police. The staff must have a minimum of four hours of pediatric continuing education each year, and the agency must provide community outreach programs. Its car seat safety program, CPR classes, show and tell activities at schools and the Mt. Lebanon Public Safety Camp are just a few examples of that outreach.

WATER RESCUE MEDICS Four Medical Rescue Team South Authority paramedics were certified as Swiftwater Rescue Technicians through the Pennsylvania Fish & Boat Commission and National Fire Protection Association. In Mt. Lebanon, the most likely use for this skill would be during flooding of creeks and streams or flash flooding during storms. The course safely teaches the medics how to rescue a flood victim. Over the past two years, paramedics Alan Rowe, Ken Rothhaar, Bill Sukitch, David Terkel and Deputy Chief Jesse Siefert have completed courses such as Emergency Boat Operations, Ice Rescue, Advanced Line Systems and Water Rescue Emergency Response in order to reach the technician level. In addition to local response, MRTSA personnel participate on the Allegheny County Swiftwater Rescue Team, which has been certified in flood management and rescue with a 1A rating, the highest possible rating. Allegheny County has the only team in the state to achieve the rating.

BEAUTY BEHIND THE BADGE Police Chief Coleman McDonough (and perhaps several other department members, if he’s able to bribe them) will participate in the Cops in Couture fashion show at the Mall at Robinson at 7 p.m. October 8. Tickets are $35 and benefit the Law Enforcement Officers Memorial.