PERSONNEL CHANGES Cpl. Dan Hyslop, who has been with the Mt. Lebanon Police Department since 2004, has been promoted to lieutenant. He was most recently in the investigations unit and has been a field training officer as well as a negotiator for the critical incident response team… Lt. Robert Kwiatkowski retired in March after 25 years with the department. Before he retired, Kwiatkowski was a watch commander. He enjoyed working with the field training unit, which he supervised for the last six years. He spent considerable time in the traffic unit. “We will miss his traffic expertise and his leadership,” says Police Chief Coleman McDonough.

BARGAIN BUY Police got one great deal on three sets of scales to weigh commercial vehicles like large trucks. Regularly priced at about $8,000 for a set of two, the department was able to purchase three used sets in great condition for $500 each from state surplus. The small scales, which look like overblown bathroom scales, slide under one axle at a time so portions of the truck can be weighed and then added together to get the total.

Overweight trucks are one of our most significant commercial vehicle violations and are among the most dangerous, says Deputy Chief Aaron Lauth, because a heavy truck overtaxes the entire mechanical system and pushes the capability of the safety system. 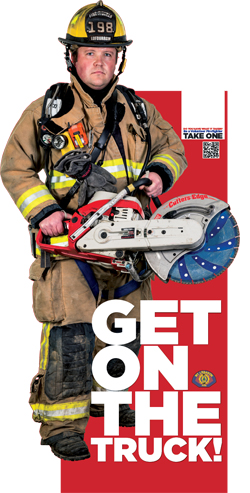 THE SEARCH GOES ON You still have time to win a free birthday party in the Fire Department’s “Flat Firefighters” photo contest. To enter, take a picture of your child or family with each of the six life-sized, standup figures of the firefighters, which are located around town to promote the volunteer fire recruitment campaign. Email the pictures to firecontest@mtlebanon.org or post them as a group to the department’s Facebook page or Twitter with your name and the hashtag #mtlfd. You have until May 31.

Need a hint? Here’s where you can find the figures: Rollier’s Hardware, Public Safety Center, Municipal Building, Mt. Lebanon Library, the Mt. Lebanon Recreation Center and the movie theaters in The Galleria.

Chief Nick Sohyda will select a winner at random from all complete entries, and that family will win a birthday party for 12 kids at the firehouse to be used within a year.

But hey, if you want to win really big, consider becoming a volunteer firefighter and “Get on the Truck,” which is the theme of the ongoing recruitment campaign. The rewards for that are priceless.