Nothing can scare a parent as much as seeing their child take a hit to the head while playing sports. But now, through its new C3 Logix concussion testing system, Medical Rescue Team South Authority can use mobile equipment to help find out quickly if a head injury is serious. The program is part of an Allegheny Health Network program. Last summer, several MRTSA paramedics were trained in the technology, which features iPads, along with other equipment, such as balance boards and harnesses. MRTSA’s participation in the program is free.

MRTSA deputy chief Jesse Siefert says the testing has several components: vision tests, reaction time and balance, using a balance pad and harness. AHN says the exam, called a neurocognitive exam, helps to track vision, reflexes and ability to visually focus on moving objects. For part of the test, the iPad is strapped to the patient’s back, and an app uses an accelerometer and gyroscope to give detailed information about the patient’s posture and stances on firm and soft surfaces.

Athletes are first given a baseline test before any impact happens so that medical professionals can see what the child was like before exposure to the activity. Then, if the child is injured during a sport, a medic can use a mobile unit in the ambulance to give the test again, printing out results for the family.

That data is then compared with the baseline to determine the scope of injury and develop any needed treatment plans. If the patient needs to go the hospital, even one outside of the AHN system, all historical data is available to doctors. “It’s pretty interesting how they’re going to bring all this data together,” Siefert says.

Siefert likes the new system better than some of the older assessments, which involve sitting at a computer. “It’s focused on physical activity instead of computer interactions,” he says of the C3 Logix. “I think it’s pretty valuable. We’re even looking at doing it for our employees.”

The test is intended for ages 10 and up, he says.

While the baseline is meant for kids on sports teams, active children not on a team can still get an evaluation. Siefert says you can make an appointment with MRTSA at 412-343-5111 and have it done at the offices for free. (Highmark charges $10 to $20 for the test but with the launch of the program, MRTSA does not charge.)

FREEBIE How would you like a free car seat for your child? MRTSA has 100 of them, in various stages from infant to booster seat, to give away, thanks to its partnership with the Pennsylvania Department of Transportation’s Traffic Injury Prevention Program, and a group called PA TECHS (Pennsylvania Team Educators for Child Safety.)

Sign up for MRTSA’s free, 30-minute, one-on-one car seat safety lesson, and you’ll leave with a new seat and step-by-step instructions to make sure it’s installed properly. Nine out of 10 child safety seats in the state aren’t installed right. Don’t take the risk that yours is one of them. 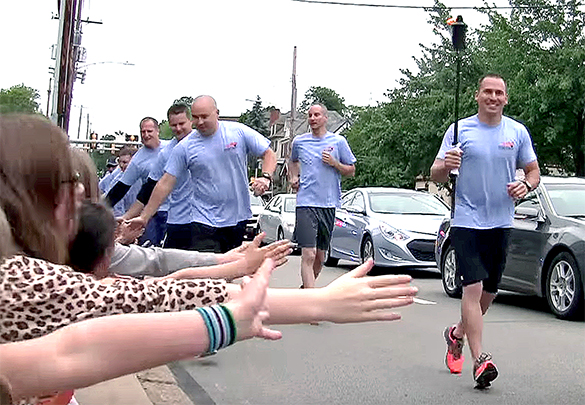 RUN FOR SPECIAL OLYMPICS Mt. Lebanon police will again participate in the Law Enforcement Torch Run to benefit Special Olympics. On May 31 at 9 a.m., starting on Washington Road near the Mt. Lebanon Public Library, officers will run the torch for the summer Special Olympic Games, to be held in State College June 2 through June 4. The department’s segment will wind circuitously through the streets of Brookline, Beechview and Mount Washington and finally to Station Square. The public is welcome, with plenty of good spots available along Washington Road to cheer them on. You also can donate through the police website.

VACATIONERS TAKE NOTE: You can fill out a vacation form with the police department, which gives the department the dates you will be gone, and your contact numbers should anyone need to reach you for an emergency. Make sure you put a hold on your mail and newspaper delivery,  and make sure all packages are delivered elsewhere, or find a reliable neighbor to get that stuff for you. But if police needed to get in touch with you, the paperwork makes it possible.

HOT CAMERAS The Fire Department purchased six new thermal imaging cameras, two of which were purchased by the volunteer department. The cameras, which cost roughly $7,500 each, were discounted from an expected price of $12,000. Fire Chief Nick Sohyda says the handheld cameras were needed because technology changes quickly. The imagers are used primarily to find trapped fire victims.

In addition to more than a dozen certifications, Brown was a recipient of the Department’s Medal of Valor after rescuing a civilian during a high rise fire. He is an Eagle Scout.

After his retirement, he will be working for a civilian company that performs fire inspections for communities that do not have the staff to do it themselves. He will also continue teaching at the Allegheny County Fire Academy and CCAC.

Brown lives in Mt. Lebanon with his wife, Leslie. They have two grown sons, Jason and Kevin, both of whom are serving in the Marine Corps.